Posted at 13:17h in Swine by olivier@ovm-communication.fr 0 Comments
18 Likes 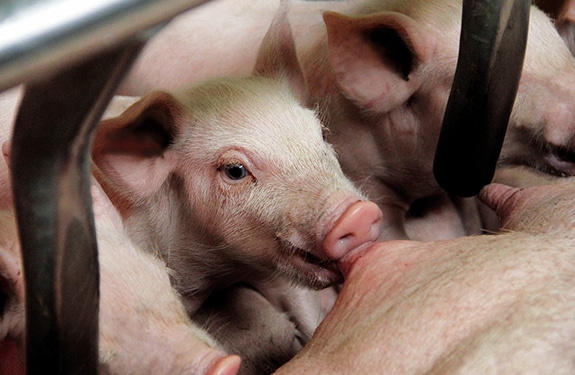 Players in the swine industry are currently looking for new ecological, functional and cost-effective alternatives to meet the growing demand for products of high sanitary and nutritional quality. In the context of increasing bacterial resistance, measures to promote responsible use of antibiotics in farms become compulsory.

From lactation to weaning: an obstacle course for piglets

Taking care of piglets at early stage is becoming fundamental: enhancing immune system by quality colostrum, encouraging feed consumption as quickly and effectively as possible and supporting health of the piglets by taking good care of the sows are clearly essential.

Among possible strategies, probiotics are used to promote the health and performance of animals (Kenny et al. 2011, Cheng et al. 2014) and probiotic yeasts have been widely used to improve intestinal health.

To validate the efficacy and benefits of supplementing the diets of gestating and lactating sows with yeast probiotic Actisaf® Sc47 (Phileo by Lesaffre, France) in the field, a study was carried out on a Spanish commercial farm looking at sows and suckling piglets’s zootechnical performance.

A Spanish commercial farm (1700 sows – 82 sows weekly, using Danbred genetic sow line and Topigs Duroc for the boar line) having zootechnical performance close to 36,7 weaned per sow per year, decided to set up a trial to try solving high challenges experienced in suckling period, especially the control of the mortality and the possible low weight at weaning. Two batches were followed. 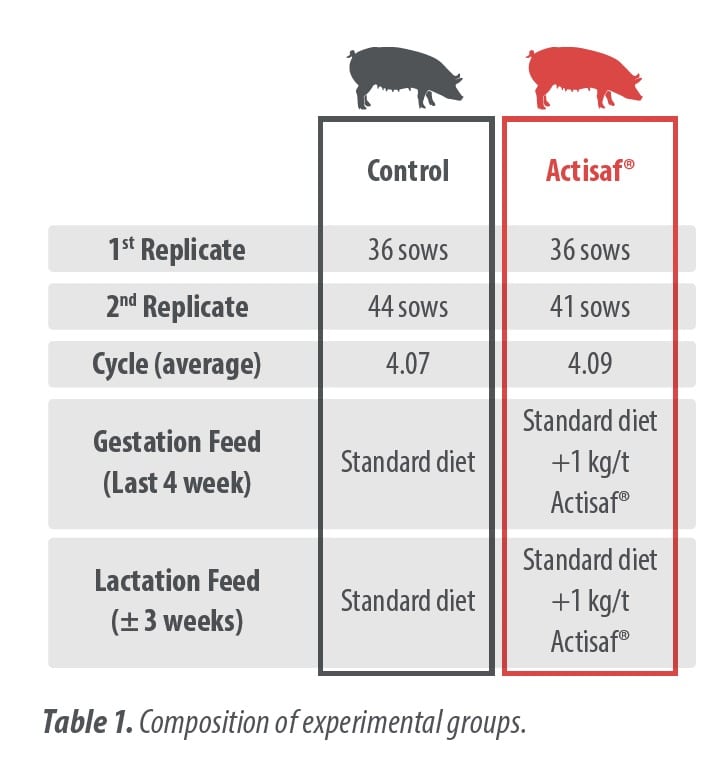 The sows were separated in two groups (Control vs Actisaf®). To avoid parity effect, each group was composed of the same number of sows of similar parity (cycles from 2 to 6). The groups (40 sows in average – Table 1) received a gestating and lactating sow’s diet currently used in the farm. In addition, only sows involved in the Actisaf® group received the equivalent of 1kg/T of Actisaf® in a complete feed for the last 4 weeks of gestation and during whole lactation (Table 1).

To follow the usual program provided by the farm, all the litters were supplemented with milkreplacer containing another bacterial-based probiotic during the whole lactation period. The cross-fostering – equalling to 16 piglets per sow – was done after the colostrum intake and within the respective groups.

During the study, the following data were registered for statistical analysis:

Although yeast probiotic was added only the last 4 weeks of gestation, the prolificacy of the Actisaf® group was significantly better than the Control group (17.9 vs. 16.3, P=0.016 – respectively) while we did not expect an improvement in this parameter by applying Actisaf® only the last 4 weeks. As a consequence, a positive trend was observed for the litter weight at birth in Actisaf® group (20.8 vs 21.8, P=0.242) (Figures 1 and 2). 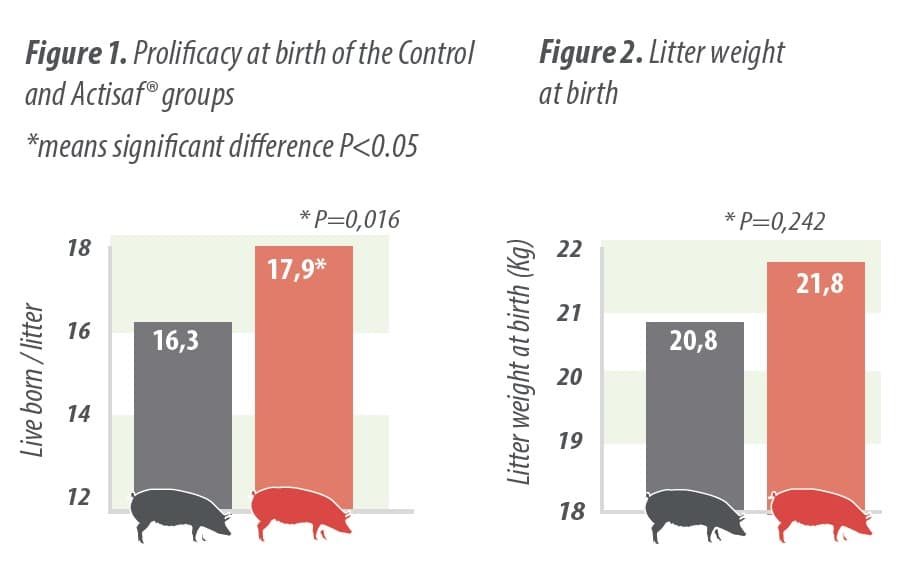 Having more piglets at birth is important, it is even more crucial to keep them alive and healthy until weaning!

Analysis of the data obtained at weaning revealed a lower mortality (-13.6%) in the Actisaf® group, even if no difference was recorded in the diarrhoea score during the suckling period (Figure 3). 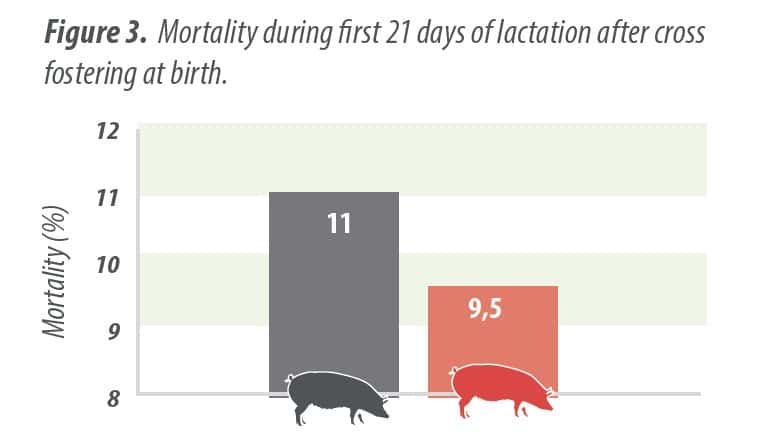 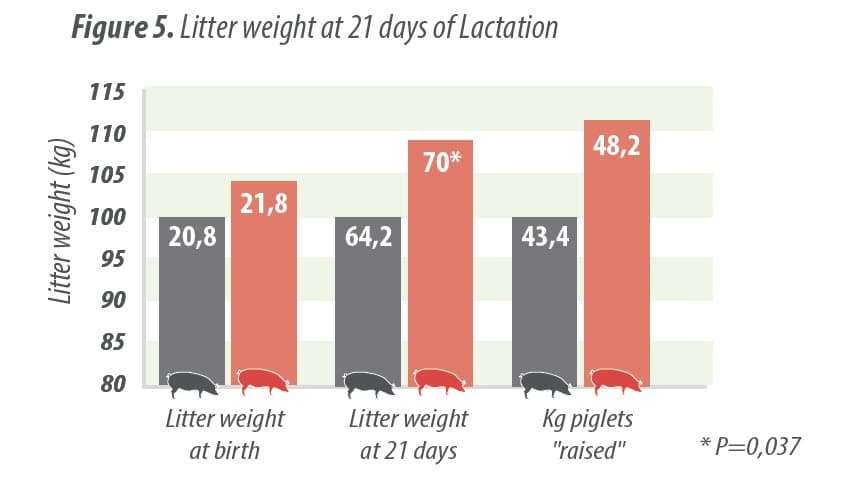 After 21 days of lactation, we observed that the piglets coming from the Actisaf® group are 245 g heavier compared to the Control group (Fig 6), showing that the supplementation of the sows supports the production of colostrum and milk of good nutritional quality. 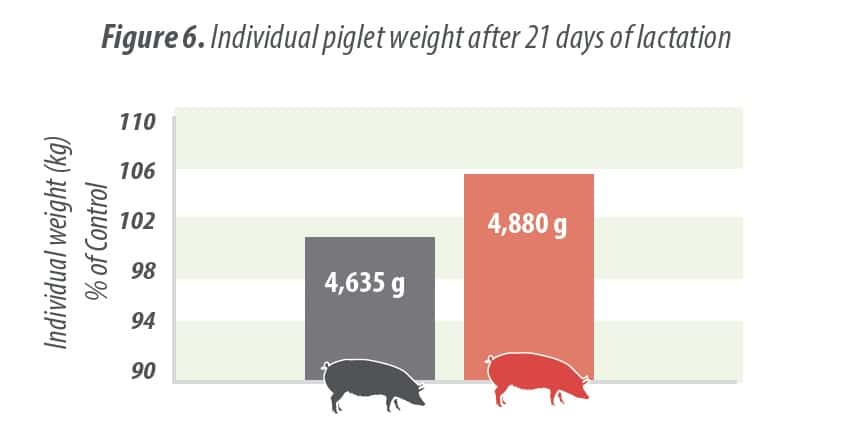