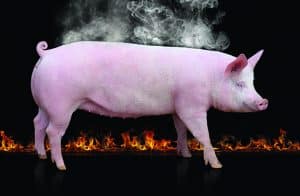 The impact of heat stress on pigs is wide-ranging and costly, often causing serious growth and reproductive problems while also increasing the likelihood that affected stock will succumb to illness or disease more readily than non-stressed animals.

In looking for viable on-farm solutions, however, researchers at Phileo by Lesaffre have achieved impressive results from the use of yeast probiotics as a dietary supplement for use with both breeding and finishing pigs.

Beginning with the core issue, heat stress in pigs starts to become a cause for concern when temperatures climb above 24°C, potentially advancing to emergency status from as low as 27°C. The key factor to watch is the combination of high temperatures and humidity (THI).  As shown in the heat stress index, the coming together of a temperature of 27°C and 90% relative humidity (RH) is as dangerous to stock as 31°C and 40% RH. 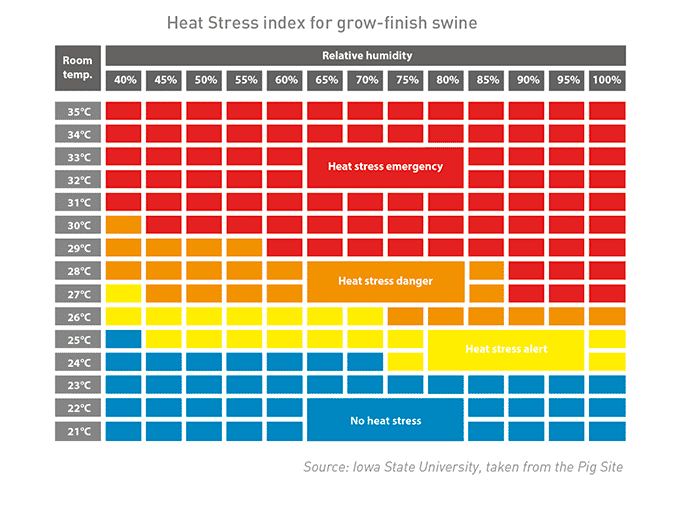 Once conditions reach emergency status, the potential impact on stock can be severe. Negative factors in finishing pigs include depressed feed intake and intestinal integrity, while breeding sows often suffer a range of fertility problems, such as a decline in embryo survival and smaller litter sizes. Reduced milk production can be another issue, leading to follow-on impacts in terms of slower growth in newly born piglets.

Heat stress damage to intestinal integrity, resulting in higher endotoxins in the blood, can create an easier entrance for pathogens into the systems of all pigs. It can also alter a pig’s protein metabolism and increase overall levels of oxidative stress.

In sows, a common reaction to heat stress is the triggering of a cooling-inspired redirection of blood flow towards their skin and mammary tissues, a process which takes blood flow away from the ovaries. Negative effects from this can include damage to the quality of the follicles, with research showing a clear size difference between sows kept under thermo neutral (TN) conditions and those having to cope with heat stress. A reduction in the preparation of the uterus for pregnancy is another identified consequence of heat stress in sows, a factor which has a clear and negative impact on piglet production.

Phileo researchers, working on heat stress solutions for both finishing and breeding sows, have studied the use of the company’s yeast probiotic, Actisaf® Sc 47, the dual-action yeast, Selsaf 3000®, and the selected yeast fraction, Safmannan®.

Actisaf® Sc 47 was the focus of a major trial carried out Vietnam in 2019 in which 80 sows were faced with a day-time temperature of up to 35°C and humidity levels ranging from 70-85%. Working with four groups of 20 sows each, the trial involved giving two of the groups a supplement of Actisaf® Sc 47, fed at 5g per sow per day. This continued from 105 days of gestation until weaning. The other two groups, which were kept as a control, received no dietary supplementation whatsoever. 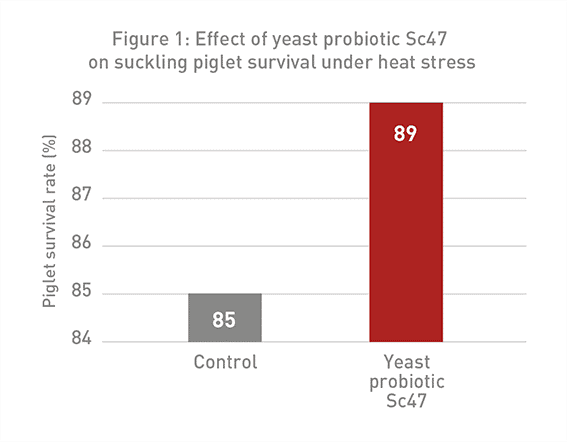 The other major discovery was that while 20% of the control sows suffered diarrhoea, this figure fell to 8% in the supplemented groups (see figure 2). 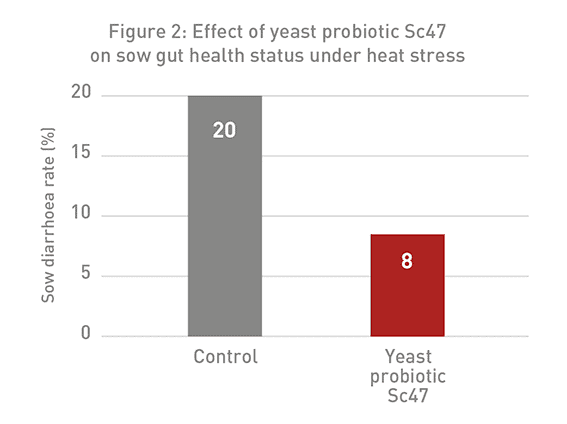 Measured in financial terms, the probiotic produced an ‘extra gain’ benefit worth the equivalent of just under US$16 per sow. This left a return on investment (ROI) of 15:1.

Actisaf Sc 47 was also the focus of a finishing pigs’ trial in the USA, a heat stress assessment involving 96 crossbred barrows weighing around 80kg bodyweight. The study embraced six dietary-environmental treatments, two of which centred on (HS) heat stress impacts, with two (TN) thermoneutral groups kept as a control.

The pigs were tested across three separate experimental periods, the third of which involved exposure to progressive heat stress conditions, ranging from 28 to 33˚C and an RH of 37.8 ± 0.2%.

Results showed the HS pigs had an overall increase in rectal temperature, skin temperature, and respiration rate, compared to the TN pigs. HS pigs also suffered a 30% decline in average daily feed intake (ADFI) alongside a 26% fall in average dairy gain (ADG). This led to final bodyweight (FBW) being 7% lower than in TN pigs.

The trial conclusion was that supplementing the diet of finishing pigs with the yeast probiotic yielded excellent zootechnical performance improvements under HS conditions, as evidenced by increases in feed intake, daily growth, final bodyweight, and feed efficiency.

Work with Selsaf 3000®, meanwhile, has established it as a valuable additional tool to help minimise the effects of oxidative stress during HS periods, helping to provide pigs with a dual-action source of selenium yeast to support optimal metabolic activity and create higher selenium reserves.

Finally, don’t forget the role that water plays in heat stress conditions.  Although this is an obvious point, it’s often neglected or forgotten. In addressing this crucial requirement, it’s important to keep water storage and troughs as cool as possible during heat stress periods.