23 Mar Transitioning to Zero ZnO: The role of dietary fibre

Posted at 06:58h in Swine, Testimonials by olivier@ovm-communication.fr 0 Comments
22 Likes 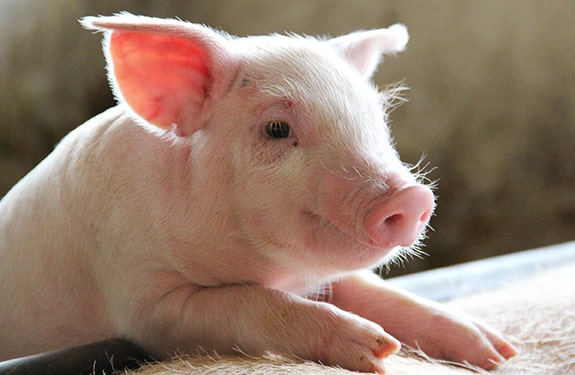 To work towards a future free from high levels of ZnO, novel nutritional approaches are necessary. In part 5 of this article series, French animal nutritionist expert Gilles Langeoire takes a closer look on how dietary fibre fits in our aim to transition to zero zinc pig production.

Are we prepared to remove ZnO from piglet diets?

A survey done by Farmers Weekly and Elanco showed that that one-third of pig farmers in the UK are still routinely using zinc oxide in pigs after weaning, and 60% have no plan in place for when it is banned in 2022. Minimising problems is all about good preparation and know the solutions that you can use to limit the negative effects of removing ZnO (such as increased costs, low feed intakes, gut health issues). We have learned a lot from the earlier removal of antibiotic growth promotors in the EU. Solutions for keeping health and performance up can be found in feeding diets with more digestible protein sources and a lower protein level to limit hindgut fermentation and associated problems. We also learned more about the inclusion of organic acids and their antimicrobial activities and prebiotics (rapidly fermentable fibres) that act as substrate for the commensal, health promoting bacteria. We can take this knowledge to also better deal with the upcoming ZnO ban.

What role does dietary fibre play?

With the upcoming European ZnO ban and the stricter rules to use antibiotics, the in-gut acidification (stomach, intestine, colon, caecum) is one of the most important factors to consider when we want to improve nutrient digestibility. A proper in-gut acidification starts with a healthy gut (which is stable and has a diversified microflora). The gut can be positively influenced by feeding dietary fibre (the sum of Non-Starch Polysaccharides (NSPs) and lignin). In piglets, feeding dietary fibre increases the length of the intestine and volume of the stomach. The enzymatic functions are increased, reflected in a slower gastric emptying, swelling capacity and motility. Dietary fibre limits the proteolytic fermentations and ammonia production, improving well-being and gut health. Physiologically, the dietary fibre fermentations induces the production of gas and volatile fatty acids (VFA) improving the acidification in the lower segment of the intestine increasing the microbial population and its diversity, limiting the development of the pathogenic bacteria (like E. coli, Clostridium…). Dietary fibre is also know to positively stimulate the immune system. So dietary fibre is important when we re-evaluate piglet diets.

How to choose the right fibre source?

This starts with a good fibre ratio (soluble/ fermentable/fast and insoluble/inert/slow), modulated depending of the farm situation. Soluble fibres sources are for example: Barley, sugar beet pulp, soy bean hulls, inulin and resistant starch. Insoluble fibre sources are for example: Wheat Bran, rice bran, oat hulls and corn DDGS. For the young piglet from weaning to 10 to 12 kg body weight, insoluble fibre has a positive effect on the gastrointestinal tract development (size of the stomach and volume of the whole gut) and increase the passage rate bulkiness of faeces, which in turn are key for preventing proliferation and colonization of pathogens. During the first days after weaning, there is no benefits of using soluble fibre because the piglet’s hindgut has a very limited capacity to ferment fibre and the gut viscosity can reduce the enzyme efficiency. For older piglets (12 to 25kg), a well-balanced dietary fibre inclusion will improve gut health and limit the risk of dysbiosis. The volatile fatty acids, induced from the soluble fibres, will supply energy (lactate, acetate…), low pH and low buffering capacity, given an additional effect to the added organic acids and a better protein digestibility. The insoluble dietary fibre will have a positive effect on gut morphology through a mechanical effect on the gut wall stimulating the gut peristalsis and the butyric acid production (villi/Crypt ratio, mucus layer, intestinal barrier functions) that will limit the risk and the development of the most harmful pathogens.

Balancing fibre is important, but what can we do more?

Considering the importance of the dietary protein digestibility, we must also pay attention to the acid buffering capacity (ABC) of the feed. The ABC is the ability of a feedstuff to resist a pH change. A high ABC will increase stomach pH, which in turn can reduce digestion and spur digestive problems. For optimal protein digestibility, a low gastric pH (and thus a low ABC level of the feed) is required to help the gastric digestive process, limit bacteria growth in the upper segment of the gut and reaching desired growth levels. Starch and lipids will have a little impact on the ABC, because energy catabolism produces CO2 and VFA, leading to acidification of the GIT. Protein will increase the ABC, because of their catabolism producing ammonia, ketones bodies and biogenic amines (histamine, serotonin…) that increase the pH level. Also minerals will induce a high ABC, impacting the dietary electrolytic balance and the gastric enzymes synthesis and efficiency. Please note that ZnO has the highest ABC value (more than 16,000 meq/HCl). A low ABC can be achieved with a reduced limestone level compensated with a salted form of acid (e.g. Calcium formate), an organic acid addition (e.g. Lactic, formic acids) and a low protein level (well balanced with synthetic amino acids).

Phileo has developed the Program Zero ZnO to bring solutions to pig farmers to successfully make the transition to zero (therapeutic) zinc. The program focuses on 3 pillars that include: strengthening the microbiome, reducing pathogen pressure and enhancing feed intake.