Posted at 09:57h in Swine by olivier@ovm-communication.fr 0 Comments
22 Likes 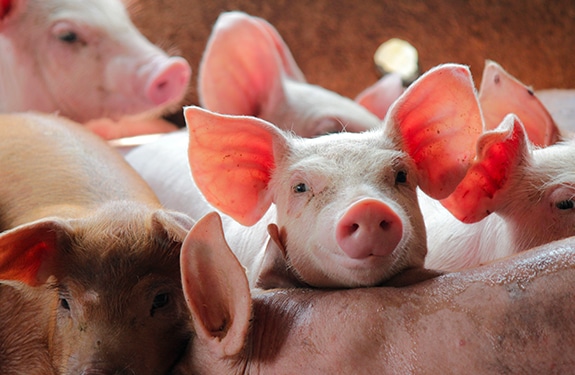 Since feed constitutes the main production cost in pig production, it must be of high quality, technically efficient, and comply with strict health rules. Because farmers must ensure that their animals are properly fed according to their physiological needs, the choice of feed ingredients is crucial. Some additives can be added to improve the digestibility of the feed. A trial at Futterkamp was performed on 330 pigs, separated into two groups (15 replicates per group) to evaluate effects of live yeast supplementation in the starter, grower and finisher feeds on performance of fattening pigs up to slaughter. Except during the growing period, the average daily gain (ADG) was significantly improved in the live yeast group (LY) compared to the control group (C) (912 vs. 888 g/d, respectively; p=0.03). Numerically, the (LY) group had higher feed intake (FI) in all stages, which was significantly higher in the finishing period (2.86 vs. 2.83 kg/d respectively, p<0.05). Overall feed consumption was higher in the (LY) group (2.27 kg vs. 2.20 kg/d; p=0.2). In the finishing period, the feed conversion ratio (FCR) was significantly reduced in the (LY) group (2.98 vs. 3.22 p=0.04), and overall, FCR tended to be better in (LY) group than in the (C) group (2.53 vs. 2.57 respectively; p=0.15). Carcass quality was similar in both groups. At the end of the trial, the net profit per pig was higher in the (LY) group. In conclusion, yeast supplementation had a positive impact on ADG over the entire fattening period. FI and FCR were significantly improved in the finisher phase, and the net profit per pig was €1.11. These results suggest that supplementation with live yeast during the fattening stage would improve feed efficiency of fattening pigs.

Growth performance and feed efficiency are known to be key factors in ensuring the economic productivity of a fattening unit. At the same time, global population growth is increasing the demand for protein, which has to be produced using fewer resources while achieving productivity gains and offering socio-economic and environmental benefits for producers and society as a whole. The swine industry has specific needs which must be addressed, including the ability to supply slaughterhouses and packers with quality meat while also meeting consumer demands. Nutritionists are therefore having to develop new feed formulas in response to these criteria.
Different strategies are currently under development to improve the performance of pigs from fattening up to slaughter and control the various metabolic disorders during the fattening period. One such strategy involves use of live yeast in the different fattening diets. These yeasts are believed to promote the development of beneficial flora and enable the fibrolytic bacteria of the intestinal microbiota to perform their full role when digesting certain fibres contained in feed (Kiros et al., 2016). The extra energy released from the degradation of these fibres is in turn thought to improve the performance of pigs (Lizardo et al., 2008).

In order to validate these data on improved animal performance at the different stages of the fattening period, a trial was carried out to assess the effects of live yeast supplementation in starter, grower and finisher feeds on the health status and performance of pigs up to slaughter.

The study was conducted at a pig farm at the Futterkamp experimental centre in Germany. A total of 330 fattening pigs (Topigs N70 – DanBred – PIC x Piétrain) with an initial weight of 30.4 kg were divided into two homogeneous groups, yeast (Y) vs. control (C), according to weight and sex (n=165, 88 ♀ and 77 ♂, 15 replicates of 11 pigs). Group (C) was fed starter, grower and finisher feeds containing barley, soybean and wheat flour, including NSP enzymes but no antibiotics or probiotic-type additives. The animals in group (Y) were fed the same feed but with Actisaf® HR+ Sc47 live yeast supplementation (Phileo by Lesaffre, France) at doses of 1.0 kg/t of feed in the starter feed and 0.5 kg/t in the grower and finisher feeds.
1.2. Measurements

The individual weight of the animals was measured at the beginning/ end of each feeding phase, and feed intake was recorded for each period. The average daily gain (ADG) was calculated in addition to the feed conversion ratio (FCR) for each feeding phase up to slaughter (99 days of fattening on average), with the 1st departure for slaughter taking place after 85 days of fattening.

Finally, the individual weight and carcass quality were measured at the slaughterhouse.
1.3. Statistical analyses

Statistical analyses were performed using version 9.4 of the SAS software, with the pen as the experimental unit. The performance parameters were analysed using the MIXED procedure, with the group and sex as fixed parameters. The weight and carcass quality were evaluated using AutoFOM III. All analyses were carried out at the 5% confidence level. 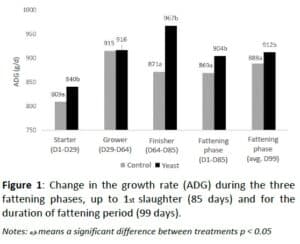 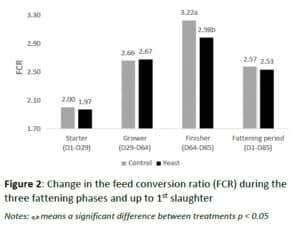 In 2008, Lizardo et al. demonstrated the benefits of yeast on pig performance, in particular due to the improved degradation of the fibres contained in feed. Also, yeast supports digestive flora, which in turn improves animal efficiency, thus promoting growth in optimum conditions. It is an approach that satisfies the need
for improved nutrient efficiency, an objective shared by all those involved in the industry.

This study, conducted under commercial conditions, suggests that yeast supplementation can play an important role in optimising the available nutrients, resulting in improved feed efficiency and higher growth rates. It therefore confirms the benefits of yeast supplementation in terms of boosting the fattening pig performance.