Posted at 09:38h in Swine by olivier@ovm-communication.fr 0 Comments
22 Likes 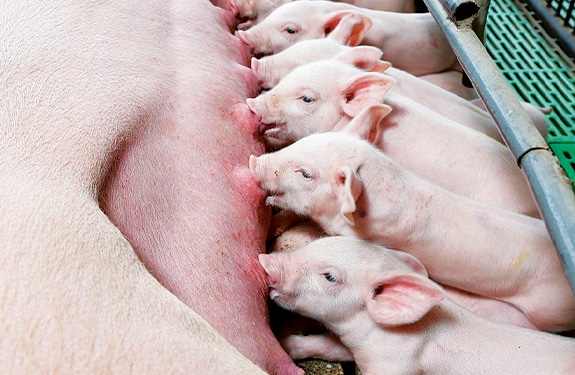 The main roles of colostrum are to provide energy, passive and active defenses and to promote the development of the baby pig’s organs. Newborn baby pigs are sterile in utero with no immunity transfer from the placenta. They depend entirely on colostrum for both their immediate survival and their ability to fend off potential pathogens while their own innate immunity is established.

Colostrum provides baby pigs with nutrients (energy, protein, vitamins, minerals), immune effectors (lactoferrin, immunoglobulins (Ig) G, A; M) and other growth factors (IGF-1, EGF, etc.). Each pig should consume as much colostrum as possible in its first hours of life. However, birth order and farrowing duration time are of importance since immunoglobulin content of colostrum declines rapidly (-50%, 6 h after the birth of the first baby pig, Jansen et al., 2015).

Further, newborn baby pigs have very limited energy reserves (glycogen and brown fat tissue) and won’t survive more than 15 h without colostrum intake. Colostrum is rich in lactose and lipids: its energy conversion has 90% performance as against 75% for milk (Le Dividich et al., 1994).
The immune factors present in colostrum are absorbed within the first hours of the neonates’ life and provides protection against systemic pathogens and neonatal diarrhea. While IgG primarily enters circulation and helps inhibit systemic pathogens, absorbed IgA do not remain in the baby pigs’ blood: they are re-secreted to the respiratory mucosa, or stay in the gut lumen where they exert their local protection and help protect the lungs and rapidly maturing enterocytes (Salmon et al., 2009).

One major factor in optimizing expression of the baby pigs’ genetic potential, since it is directly linked to short-term survival, is appropriate colostrum intake. Providing ~250 ml of colostrum to each baby pig within its first six hours of life significantly improves survivability and longer-term viability (Devillers et al., 2011). As a matter of fact, the ingested volume of colostrum is also a strong predictor of weaning weight. Present-day sows wean ~30 baby pigs per year. This means the average litter size is ~13 plus live born baby pigs. Because individual sow’s colostrum production is highly variable and can range from 1.9 to 5.3 kg (Devillers et al., 2007), it can be difficult for many sows to adequately nurse more than 10 baby pigs. Indeed, at least one-third of sows do not produce enough colostrum to fulfil the needs of their litter (Quesnel et al., 2012).

Sow nutrition impacts on colostrum production in two ways: secretion control and the development of the mammary glands. Several studies have described the influence of fat (nature and quantity) nutrition of sows during the last month of gestation.

Modulation of dietary protein content has less influence on colostrum composition. Vitamin A and
E administered to the sow at the end of gestation concentrate in the colostrum. This is not the case with vitamin C, iron or phosphorus (Decaluwé et al., 2014). The same recent review listed the pre- and probiotics shown to increase colostrum content in IgGs, IgAs and IgMs. Out of nine studies, seven demonstrated an increase in Ig production. Internal data from Phileo by Lesaffre (2017) demonstrates that feeding live yeast probiotic triggers increased IgG in sow’s colostrum and baby pig serum.
Feeding a yeast cell wall product did not elicit an IgG response, demonstrating that whole cell probiotics are more effective at stimulating the cell-mediated immune response. A more recent work demonstrated a significant increase in both colostrum production and IgG concentration in sows fed yeast (Decaluwé et al., 2013).

Two recent studies have shown that changes in back fat thickness and in feeding management have an impact on colostrum production. These studies confirm that catabolic sows a week before farrowing could not produce an adequate volume of colostrum, and sows with parity < 3 were particularly affected. In fact, there is a negative association between colostrum yield and
changes in back fat thickness in sows between day 85 and day 109 (the larger the decrease, the poorer the yield, R2 = 0.12, p = 0.003). This is interpreted by the authors as the interference between catabolism and mammary gland development (Decaluwé et al., 2013).
Conversely, there is a positive association between colostrum yield and changes in back fat thickness of sows between day 109 of gestation and day 1 of lactation (the larger the increase, the higher the yield, R2 = 0.15, p = 0.002). However, higher parity sows are more likely to be catabolic and not achieve maximal colostrum yield. Thus, mobilization of body proteins during the final week of gestation is harmful to colostrum production, whereas it has a positive impact if it occurs at the start of lactation. However, mobilization of endogenous fat over the whole period hampers both colostrum and milk production and should be avoided.

In the second study (Decaluwé et al., 2014), both colostrum yield and its nutritional output were influenced by sow body composition. Optimal production (in quantity and quality) was observed for
sows with optimal back fat thickness (17-23 mm) at introduction into the farrowing room. Furthermore, there were fewer catabolic sows with a high feeding strategy in place during the final week of gestation (1.5 kg of a transition diet three times a day from day 108 of gestation to day 3 of lactation), rather than feed restriction (1.5 kg of the same diet once a day from day 108 to farrowing, then progressive increase up to day 3 of lactation).

Apart from immunoglobulins, colostrum is rich in fat and sugar. The nutritional quality of colostrum is of prime importance for the short-term survival of baby pigs. After the first hours following birth, the protein content of colostrum decreases, while fat content increases (Devillers et al., 2006). In addition, colostrum functional component and nutrient content can be modulated, hence providing baby pigs with improved chances of survival (Jansen, 2015).

Although IgG transfer is of vital importance to neonates, there can be large variability between sows and gilts in their IgG colostrum concentration, even on the same farm, and within a given sow batch. Among the variation factors are a season effect and a genotype effect. The type of farm (farrowing unit, farrowing to finish unit, etc.) also plays a role, as do parity, number and morphology of functional teats, etc. Baby pigs are born without immunity and with low energy reserves. Sufficient protection of baby pigs (passive immunity) is ensured when plasma IgG is above 15 and 17 mg/ml (Le Dividich, 2006).

In a recent study (Jang et al., 2013), 30 multiparous sows (average 4.5 parities – Yorkshire x Landrace) were allocated to 3 treatments depending on their parity. All sows were housed in individual gestation stalls until the 110th day of gestation and were then moved to farrowing crates. The treatments were as follows:

ActiSaf® at 1 kg/t in gestation and lactation feed helps improve passive immune transfer: better transfer of IgG from the sow to the nursing baby pigs (Figure 1).

Most recently, a recent Phileo research trial in the US demonstrated an increase in both IgG and IgA in sow’s colostrum, but not milk, when a live yeast probiotic, Actisaf® HR+ was fed (Phileo by Lesaffre, 2020). Sows (13-15 per treatment) were fed Actisaf® at 0.25 kg/t during the last 55 days of gestation, and 1 kg/t or 2.5 kg/t from d -7 to d 21 after farrowing. Sows fed Actisaf® at either dose had numerically higher IgG and IgA in colostrum sampled within 12-24 hours after farrowing began. These results confirm the benefit of feeding Actisaf® live yeast probiotic to improve colostrum quality as part of a balanced sow nutrition program to optimize herd health and productivity (Figure 2). 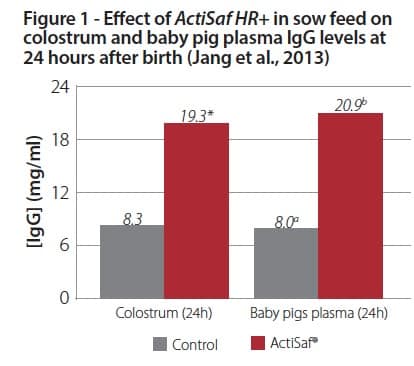 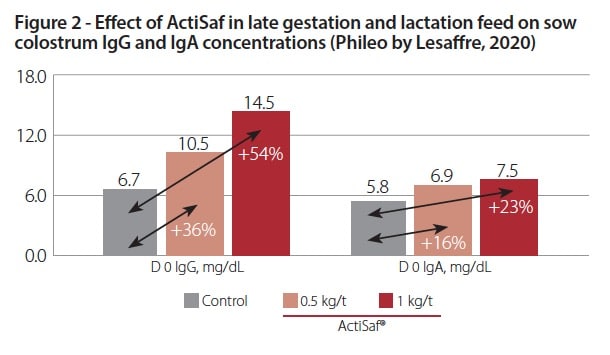 Baby pigs need minerals for their development and for good resistance to oxidative stress, and selenium is of prime importance in this regard. Selenium is provided by the sow (through milk) during the suckling period. Thus, the higher the selenium colostrum and milk content, the better its transfer to baby pigs, and the better able the pig’s immune system can respond to challenge (Wuryastuti et al., 1993; Table 1). A study conducted by Mahan et al., 2004 has shown that supplementation with selenium yeast in the feed of sows (0.15 ppm) helps:

Selsaf® is a premium source of selenium yeast that provides selenomethionine, selenocysteine and a variety of other selenoproteins needed to improve selenium reserves in sows and nursing baby pigs. 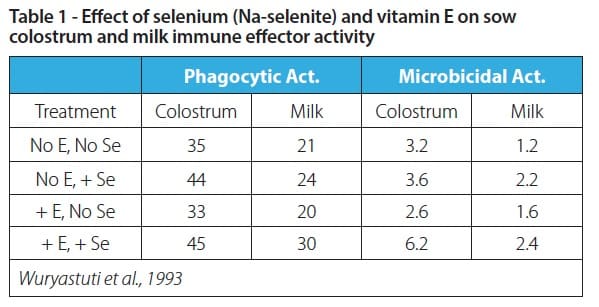 Maximizing sow and litter productivity involves many different components. An often overlooked, but important component is maximizing colostrum yield and quality through proper management and nutritional supplementation. The use of Actisaf® and Selsaf® in the sow nutrition program during gestation and lactation helps improve colostrum quality and helps establish necessary metabolic reserves to thrive in modern commercial pork production.