Posted at 09:49h in Swine by olivier@ovm-communication.fr 0 Comments
22 Likes 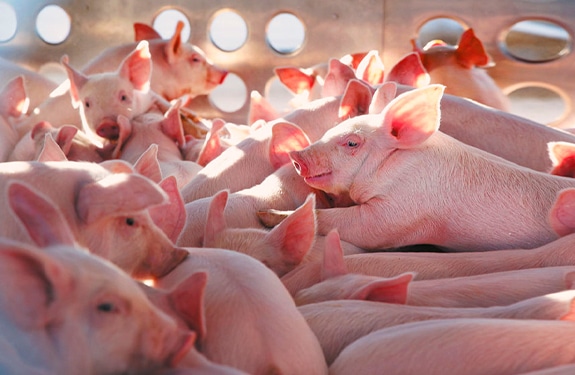 Feeding live yeast probiotics to livestock has been a beneficial practice for centuries. Specifically, feeding them to pigs has demonstrated performance and health improvements. More recently, Phileo by Lesaffre has identified a strain, ActiSaf SC 47, that maximized health and performance in many livestock species. This strain was selected from a catalog of over 9,000 strains. Strain variant is quite important because strains closely related genetically may function quite differently. Feeding the live yeast probiotic ActiSaf HR+ has demonstrated benefits in sows and offspring, with demonstrated benefits in the nursing pig’s microbiota balance (Figure 1), increased number born live, reduced lightweight pigs at weaning, and increased milk immunoglobulins.

Further research indicates that feeding ActiSaf HR+ increased gut microbiota variation in the pig’s gut while reducing microbiota variation between pigs in the same group after weaning (Figure 2; Kiros et al., 2018). These results further suggest that the carryover benefit in pigs after weaning could be valuable. Thus, the purpose of this research was to quantify the effects of feeding ActiSaf HR+ to sows during gestation and lactation on sow and litter performance,
followed by measuring the offspring growth performance from weaning to market. 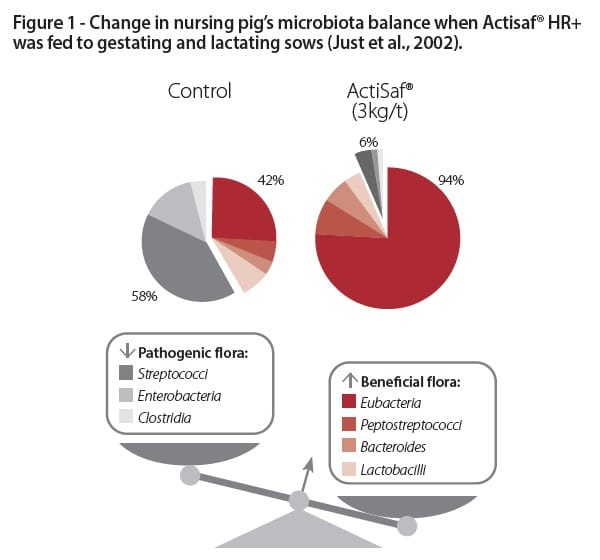 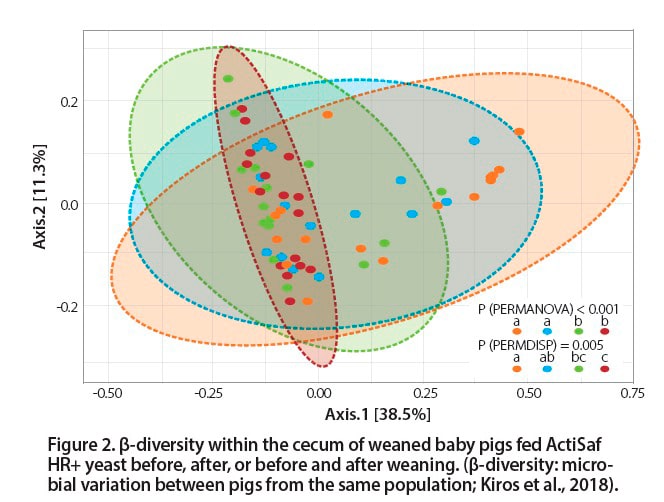 In this trial, we used1,260 pigs (PIC 1050 X 359; initially 19 d of age, ~12.2 lbs) were sourced with negative PRRS, PEDv and M. hyopneumonea status. Each pen at weaning was mixed sex with 21 pigs/pen with 10 pens per treatment. Pens of pigs were weighed at d 0, 12, 23, and 42. Treatment integrity was maintained throughout finishing to measure net grow-finish and wean-finish weight gain as well.

Treatments were arranged in a 3×2 design. The 3 sow treatments and 2 nursery feed treatments with pen as the experimental unit made up the 6 treatments. During this trial, no main effect or interactions were observed for the nursery feed treatments. Thus, only the sow treatment carryover effects on weaned pig performance are shown. At weaning, all pigs received PCV2 and Mycoplasma vaccination. On d 25, 3 dead pigs were submitted to the ISU VDL. Results indicated the pigs were positive for PRRSv, Rotavirus, PCV 2&3, and F18 hemolytic E. coli. This occurred about d 23-25 after weaning, with the other diseases likely secondary to the PRRSv infection. Consequently, 147 were removed (11.6%). No additional significant group infections were observed after day 42 post-weaning.

Full trial results can be obtained by email request to the author.