Posted at 10:08h in Swine by olivier@ovm-communication.fr 0 Comments
22 Likes 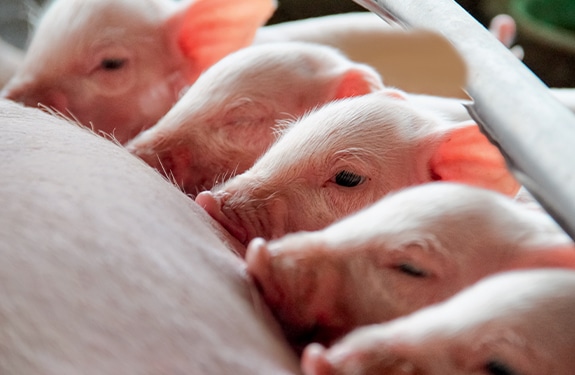 The use of hyperprolific sow lines is creating new challenges, such as the need to manage small piglets that are frailer at birth. Thus, in the context of responsible use of antibiotics on farms, ensuring good lactation and better immune status of piglets at weaning becomes a priority. A comparative trial was conducted on a commercial farm of 160 sows divided into two groups (Control (C) vs. Live Yeast (LY)), in two successive batches. Prolificacy was significantly higher in group (LY) than in group (C) (17.9 vs 16.3, respectively, P=0.016), without any significant difference in litter weight at birth (21.8 vs 20.8 kg, respectively, P=0.242). At weaning, we observed a 13.6 % lower mortality rate in group (LY), although no difference in diarrhea scores was recorded during the entire lactation period. The number of piglets after 21 days of lactation was 0.35 piglet higher in group (LY) than in group (C) (14.45 vs. 14.10, respectively). Litter weight was significantly improved, by 5.8 kg (LY: 70 kg vs C: 64.2 kg, P=0.037). This resulted in a weight gain of +4.8 kg per weaned litter. Finally, after 21 days of lactation, piglets from group (LY) were 245 g heavier than those from group (C). These results suggest that supplementing sow feed with live yeast supports production of colostrum and milk with good nutritional quality, which allows for good-quality piglets at weaning.

Swine industry stakeholders are currently seeking new ecological, functional and profitable alternatives to meet the growing demand for products of a high safety and nutritional quality. Faced with increasing bacterial resistance, measures aimed at promoting responsible use of antibiotics in pig farms are becoming increasingly necessary

Use of hyperprolific sows is currently resulting in more piglets at birth that are smaller and consequently more fragile. It is therefore crucial that these piglets are looked after from an early stage. Measures to improve their immune system with high-quality colostrum, encourage feed intake as quickly and efficiently as possible and promote their health by preserving the health and life of sows are clearly essential.

Possible strategies include the use of probiotics, and in particular live yeast, which is known to promote animal health and performance (Kenny et al., 2011). Numerous publications have demonstrated the positive effect of the probiotic yeast Saccharomyces cerevisiae on the health and performance of sows (Jang et al., 2013; Jurgen et al., 1997; Zanello et al., 2011), mainly in terms of modulating the microbiota, boosting piglet immunity by improving the quality of colostrum and milk (Trckova et al., 2014) and, finally, reducing inflammation after an E. coli challenge (Zanello et al., 2013).

To validate the efficacy and benefits of live yeast supplementation in sows in late gestation and during lactation, a trial was conducted at a Spanish commercial farm to measure the performance of sows and their piglets.

The trial was carried out in Spain at a farm with 1700 sows (♀ DanBred x ♂ Duroc Topigs) with performances close to 36.7 piglets weaned / productive sow / year. Two successive groups were followed. A total of 160 sows were selected and divided according to parity into two groups: one control group (C) and one yeast group (LY). Cross-fostering of piglets took place intra-treatment.

Sows in both groups received the gestating and lactating sow feeds commonly used in livestock farming. Only the sows in group (Y) received Actisaf® Sc47 live yeast supplementation (Phileo by Lesaffre, France) at a dose of 1 kg/t of complete feed during the last 4 weeks of gestation and throughout lactation; the sows in group (C) received no supplementation.
The litter weight at birth and at 21 days of age, lactation mortality, diarrhoea score and number of weaned piglets were all measured.

Statistical analyses of all measured parameters were performed using an ANOVA test, except for mortality which was analysed using a chi-squared test. Differences between treatments were considered significant when p < 0.05. 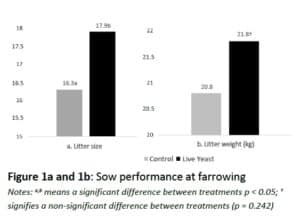 2.2. Performance at 21 days of lactation

Data analysis at 21 days revealed a relative decrease (NS; p = 0.13) in mortality of 13.6% in group (LY) compared with group (C) (11% vs. 9.5% respectively). No significant difference was observed in the diarrhoea score either. 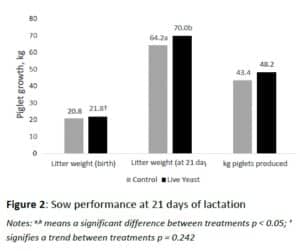 The main challenge posed when using hyperprolific sow lines in livestock farming is that of ensuring a significant number of viable piglets are obtained at farrowing while avoiding too great a variation in birthweight. It is then a question of keeping them alive and healthy until weaning. This trial tends to confirm the results described in the literature, namely that live yeast supplementation during the last month of gestation and throughout lactation enables expression of the genetic potential of hyperprolific sows; although the results obtained are not significant, with the exception of litter weight at 21 days of age, prolificacy is better (+1.6 piglets) with a good litter weight at birth, improved litter growth during lactation resulting in a better litter weight at 21 days of age (+5.8 kg), and a 13.6% decrease in mortality during lactation.

Live yeast supplementation improves the nutritional and immunological quality of the colostrum and milk, promoting litter development and maintaining lactation performance. These field results confirm the results described in the literature demonstrating the benefits of live yeast in terms of ensuring the good health of sows and the development of their piglets.