Posted at 08:12h in Swine by olivier@ovm-communication.fr 0 Comments
22 Likes 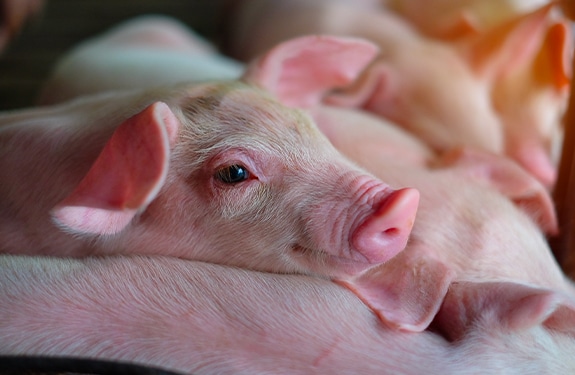 Comparison of live yeast-parietal fraction combination to a ZnO treatment on zootechnical performance of weaned piglets.

In June 2022, zinc oxide (ZnO) used to prevent post-weaning diarrhoea will be banned in Europe. In this context, farmers, veterinarians, and nutritionists must find effective alternatives to support the health of animals while maintaining their performance. Two trials were performed, one on an experimental farm and one on a commercial farm, to measure the effect of a combination of live yeast and a yeast parietal fraction on the performance of weaned piglets. In Trial 1, two groups of 88 piglets were followed throughout the post-weaning period, while in Trial 2, two groups of 246 piglets were selected. For each trial, animals in group (Y) received the live yeast-parietal fraction combination, while animals in the control groups (C) received ZnO supplementation (3300 mg/kg feed). In Trial 1, no significant differences were observed in piglet weight (Y : 19.03 vs. C : 18.62 kg) at the end of the post-weaning, average daily gain (Y : 480 vs. C: 480 g/d) and feed-conversion ratio (Y : 1.47 vs. C : 1.47), regardless of the period followed (prestarter and starter period). A positive return on investment was in favor of group (Y) (-0.0277€/kg of body weight gain). In Trial 2, feed intake was more regular in group (Y), and no significant difference was observed in the diarrhoea score. Numerically, mortality was reduced by 21% in group (Y) compared to group (C), as was the number of antibiotic treatments (by up to -52%), but the difference was not significant. In conclusion, the live yeast- parietal fraction combination proposed to farmers and nutritionists was an effective alternative to ZnO used for therapeutic purposes.

Stakeholders in the pork industry worldwide are currently facing a growing demand for protein, which they must produce with fewer resources while ensuring productivity gains for producers. Meanwhile, one of the biggest challenges for breeders, veterinarians and nutritionists is that of rapidly finding effective solutions to reduce use of antibiotics in livestock farming, bearing in mind that use of Zinc Oxide (ZnO) for therapeutic purposes will be banned in Europe by 2022. These new constraints will require changes in farm management practices, and in particular the management of hyperprolific sows and their piglets which are more fragile at birth. Early establishment of a diverse microbiota and development of immunity are essential to avoid an upsurge in digestive disorders, particularly after weaning. Various strategies are possible, including use of live yeast and/or selected yeast fractions in sow and piglet feed. In fact, several studies have shown the benefits of yeast in terms of both establishing a diverse microbiota (Kiros et al., 2019) and promoting the development of immunity (Jurgens et al., 1997). Finally, yeast and yeast fractions can “capture” pathogens (Posadas et al., 2017) and thus limit their adhesion to intestinal cell walls, hence reducing inflammation and the associated diarrhoea.

Two trials were carried out to verify and evaluate these effects on the performance of weaned piglets, one at an experimental centre (Vivafarm, Agrofeed, Hungary), the other at a commercial farm in Italy.

Study 1 was performed at a farm with 200 sows ((NF x L) F1 x DanAvl Duroc). Fourteen sows were selected and divided into 2 groups, one control group (C) and one yeast group (Y), according to their weight and parity. At weaning, 88 piglets from their litters were selected and separated into 2 groups (n=88*2), one control group (C-C) and one yeast group (Y-Y). The sows in both groups received the same lactating sow feed one week before farrowing and throughout lactation. The sows in group (Y) received supplementation in the form of 1 kg/t of Actisaf® live yeast and 0.250 kg of Safmannan® yeast cell wall (Phileo by Lesaffre, France). At weaning, the piglets in group (C-C) were fed a pre-starter feed containing 1600 mg/kg of ZnO + 180 mg/kg of colistin for 18 days, and for the following 29 days a starter feed containing 1000 mg/kg of oxytetracycline. The piglets in group (Y-Y) received pre-starter and starter feeds containing neither antibiotic nor ZnO, but with the live yeast / yeast cell wall
supplementation. The individual weight of the piglets at weaning, the average daily gain (ADG), the feed conversion ratio (FCR) and the weight of the piglets during the pre-starter and starter phases were all measured.
Study 2 was conducted in a post-weaning environment, where 492 piglets aged 28 days and weighing 7.2 kg were separated into 2 homogeneous groups, one control group (C) and one yeast group (Y), according to their weight and sex.

Statistical analyses of all measured parameters were performed using an ANOVA test. Data were considered significant when p < 0.05.

2.1. Trial conducted at an experimental farm 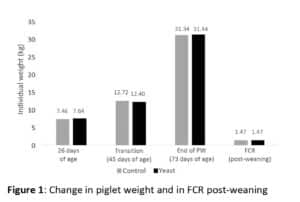 2.2. Trial at a commercial farm

Although there was no significant difference, the feed intake of the piglets in group (Y) was more consistent than that of the piglets in group (C), with the latter showing a slight decrease in consumption after removing the ZnO. The average weight between the 2 groups after 28 days of testing was not significantly different (Y: 12.5 vs. C: 12.1 kg respectively; NS).

There was no difference in the diarrhoea score between the two groups.

To meet the challenges posed by hyperprolific sows and to prepare for the ban on the use of ZnO for therapeutic purposes, particularly in Europe, it is important that various alternatives are investigated, including pre- and probiotic based solutions, before their implementation at farms. In these studies, the combination of yeast solutions helped maintain animal performance at the same level as treatment with ZnO, while controlling diarrhoea phenomena and the associated antibiotic treatments as well as the mortality which can occur in the first weeks post-weaning.

Therefore, these two trials confirm the benefits of sow and piglet feed supplementation with a combination of yeast sources as an alternative to ZnO use for therapeutic purposes to prevent diarrhoea.