Posted at 10:25h in Prosaf, Swine by olivier@ovm-communication.fr 0 Comments
22 Likes 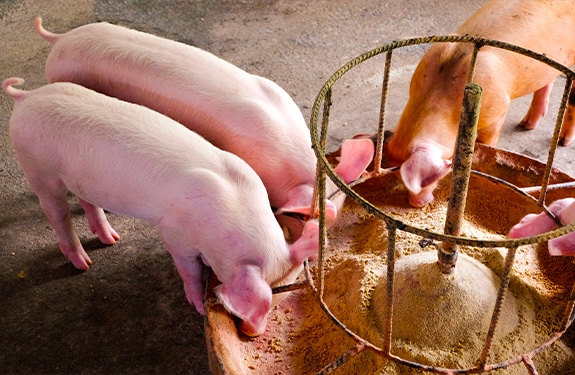 Characterisation of a protein-rich yeast extract that can be used as a source of highly digestible protein in feeds for weaned piglets.

A study with weaned piglets was conducted to measure the digestible, metabolic, and net energy and the ileal standardized digestibility of 18 amino acids of a protein-rich baker’s yeast extract (63%) compared to a brewer’s yeast. To characterize the extract properly, this study was supported by chemical analyses from laboratories to determine its buffering capacity (ABC-4) as well as its vitamin and mineral contents. The study showed better fecal digestibility of the yeast extract’s proteins (90.1% digestible) than of the brewer’s yeast (77.5%). The ileal standardized digestibility of each of the amino acids studied was similar or higher for the yeast extract than for brewer’s yeast. Digestible energy and net energy contents were similar between the two products. Chemical analyses showed a buffering capacity of 910.9 ± 46.6 meq and interesting mineral and vitamin profiles (especially of B-vitamins) for piglet feed formulation (e.g., B3 = 18.8 mg/kg; B8 = 2.8 mg/kg; B9 < 40 mg/kg). Finally, 88% of the peptides in the yeast extract had a molecular weight less than 3.6 kDa, and 38% were lower than 1 kDa. In conclusion, these analyses made it possible to characterize the digestibility of the yeast extract as well as its nutritional profile. These results suggest that this extract, due to its digestibility and the size of its peptides, is an interesting new protein source to be used in new nutritional approaches that are being developed for piglets immediately after weaning.

The growing demand for protein for human and animal consumption clearly presents a major challenge for those involved in the agri-food industries. Furthermore, industry professionals involved in pig nutrition must also meet needs in terms of maintaining high economic productivity while also respecting the health and societal demands imposed on them (reduced use of antibiotics, animal welfare, GMO-free feed, etc.). However, the development of hyperprolific sow genetics has raised numerous challenges, including larger numbers of piglets that are smaller at birth and therefore more fragile. Good lactation is crucial for helping these piglets get through the weaning stage.

Piglets are in fact subjected to various stresses during weaning (changes in diet, mixing, etc.) which can cause serious metabolic disorders (Brooks et al., 2001; Campbell et al., 2013). Encouraging feed intake before weaning and rapidly after weaning is therefore one way of ensuring piglets get off to a good start and perform well.

Possible alternatives include use of functional proteins derived from yeast extracts in post-weaning diets, which offer benefits in terms of feed palatability and because they are highly digestible, thus limiting the onset of digestive disorders.

The trial was conducted at the Schothorst Feed Research experimental centre in the Netherlands. 18 piglets (50% male, 50% female), Topigs L20 x Tempo, were placed individually in metabolic cages at weaning (26 days of age, average weight: 7.9 kg) to define the digestibility coefficients of the proteins, energy and 18 amino acids (AA) in the protein-rich baker’s yeast extract Y (63% of fresh weight). 20% of the extract Y (gross energy: 21.6 MJ/kg) or 25% of a standard brewer’s yeast S (protein content: 44% of fresh weight, gross energy: 18.4 MJ/kg) were included in a pre-starter reference formula used as a control (C). The protein content of feeds C, Y and S were 13.1%, 23.3%, and 19.2% of fresh weight respectively. These three feeds (C, Y and S) contained 0.5% titanium dioxide, used as an inert marker. After 4 days of feeding in lactation before weaning, each of the three experimental feeds were distributed in pellet form to 6 piglets for 10 days (feed adaptation period), then all the faeces and urine of these piglets were collected individually twice a day over the following 9 days to determine the apparent faecal digestibility coefficients of the dry matter and protein, and to calculate the net energy (according to the Dutch CVB Tables, 2016) of the two yeast products. On the last day of the trial, the piglets were sacrificed and their ileum content collected to determine the standardised ileal digestibility (SID) of the AAs of the two products tested, using, for each AA, the basal endogenous losses indicated in the Dutch CVB Tables (2016).
Samples of the extract (Y) were sent to a laboratory to determine its buffering capacity and its vitamin and mineral content.

Statistical analyses were performed using the R Studio program, version 3.5.0 (2018-04-23). Digestibility data were compared using the Student’s t-test, with the animal as the experimental unit. All analyses were carried out at the 5% confidence level.

2.1. Analytical composition of the yeast extract and brewer’s yeast, and digestibility coefficients 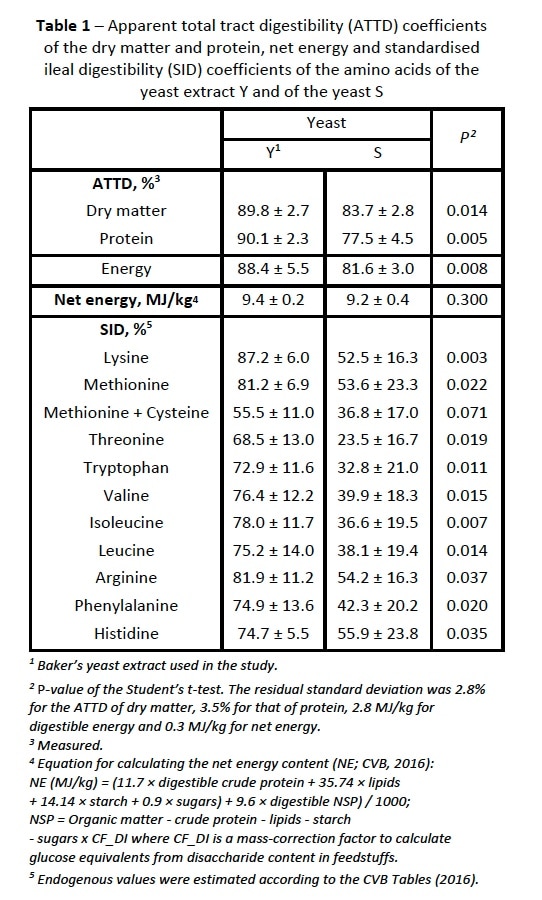 Above all, sources of purified functional protein must be palatable for piglets and highly digestible to avoid digestive disorders. They should also promote rapid development of the digestive tract in young animals and strengthen their immune status. These analyses made it possible to characterise the digestibility of yeast extract Y as well as its nutritional profile. Because of its digestibility and the size of its peptides, the results point to this extract being an interesting new source of protein for use in the new nutritional approaches currently under development for piglet feeds, in order to comply with the rational use of antibiotics.