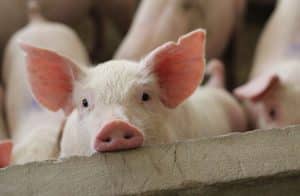 We are all convinced that the swine industry needs to evolve to more sustainable production enabling the swine industry to produce more with less. Reduced use of antibiotics, a ban on medical inclusions of zinc oxide and reduced copper legislation are only three examples of recent changes. Due to environmental concerns, the inclusion of protein is also strongly monitored. Swine diets are often compared in terms of energy value and crude protein levels. These are considered the main parameters for performance in any stage of a pig’s life. The higher these levels are, the more is expected in terms of growth- and reproductive parameters. And even though these values are very relevant, more and more importance is granted towards dietary fibres. Earlier, these were considered diluting substances in the feed as fibre itself contains little nutrients. Nowadays, different fibre fractions are considered important for animal health and consequently, performance. Various gut health related issues, such as Lawsonia and stomach ulcers are being tackled using higher contents in swine diets. It is also well known that pigs’ microbiome benefits from dietary sources.

When sufficient concentrations of yeast probiotic are ingested, the gut microflora will be improved. The impact of potential pathogenic bacteria such as Salmonella spp., E. coli and Clostridium spp. will be limited due to for example agglutination and competitive exclusion. At the same time, beneficial members of the phyla Actinobacteria (e.g. Bifidobacterium) and Firmicutes (e.g. Ruminococcaceae) will thrive1. This modified microbiome will not only lead to more healthy animals suffering from less digestive disorders. It will also improve the digestion of feed ensuring higher growth performance and increased feed efficiency. Earlier studies already confirmed that using Actisaf® Sc 47 in swine diets increases the concentration of volatile fatty acids in the hind gut2,3 (figure 1). Therefore, the energy content of these diets could be reduced by 74 kcal net energy while improving feed efficiency and maintaining growth performance. 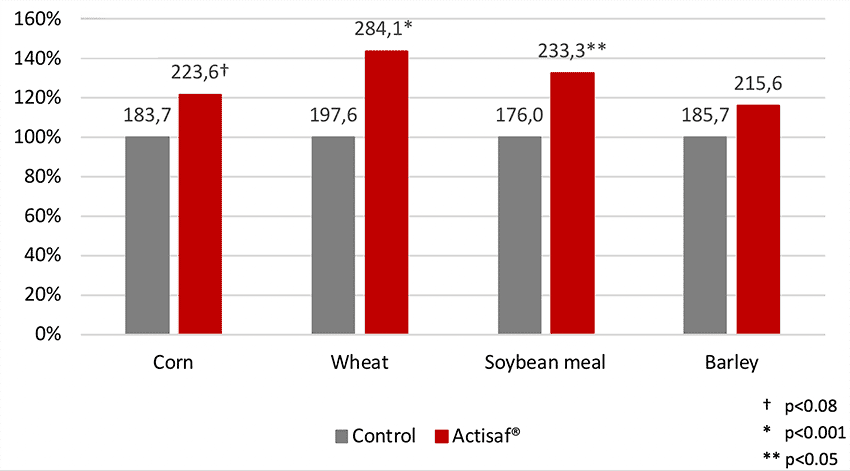 Figure 1. Variation of volatile fatty acids production (mg/g dry matter) in the hind gut of pigs with different raw materials. The production of these VFA can be increased by adding Actisaf® Sc 47 as demonstrated by Kiros et al,
2019.

Proven in the field

Recently, large scale and long-term trials were conducted on commercial farms. These farms, located in Jutland, Denmark, were using Danbred x Danish Duroc genetics, and have supplemented the animals with Actisaf® Sc 47 for several months. Conclusions of these trials were based on data extracted from the management software of each farm. Out of the 28.203 pigs participating in the trial roughly half of them received 500 gram per ton of the yeast probiotic Actisaf® Sc 47 in the starter, grower and finisher feed. Comparing data of the control groups to the groups of pigs that were supplemented with the Actisaf® Sc 47, clear differences were observed. The average daily weight gain was 954 gram per head per day in the control group, whereas for the Actisaf® Sc 47 supplemented group it was 998 gram per head per day. Data on feed efficiency was also analysed. During the control period, an FCR of 2,59 was reached while in the Actisaf® Sc 47 supplemented period the FCR was 2,50 (figure 2). 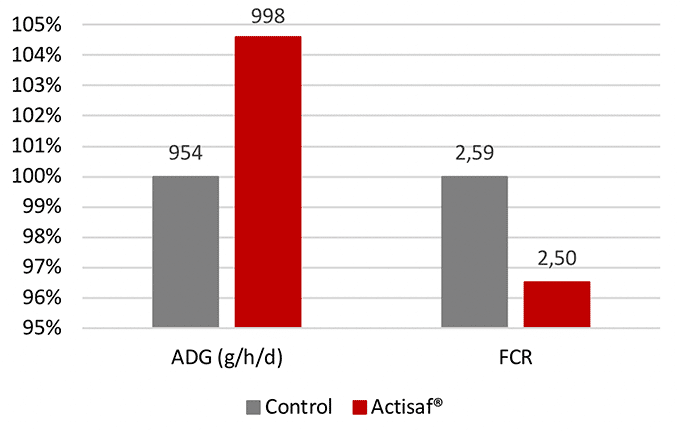 Figure 2. Analyses of farm data from the Danish farms demonstrates the positive effects of Actisaf® Sc 47 on the average daily gain (gram per head per day) and the feed conversion rate of fattening pigs.

Another recent trial done in fattening pigs with yeast probiotic Actisaf® Sc 47 was conducted by Education and Research Centre Futterkamp. This trial was designed as a prospective experimental study including two groups. One
group served as a negative control group while the other group served as the trial group. The basal diet was identical in both groups. In the trial group Actisaf® Sc 47 was added to the diet. For this trial, pigs  with an initial body weight of 30,4 kg and an average age of 72,8 days were used. All pigs were born at the Education and Research Centre. Males were not castrated. The piglets were either a crossbred of  Danbred x German Pietrain, PIC x German Pietrain or TN70 x German Pietrain. The trial was performed in the swine section of Education and Research Centre Futterkamp. Here, a herd of 390 sows are housed. All piglets are housed on site up to a body weight of approximately 30 kg. A total of 3.600 pigs per year are fattened at the research centre. All pigs are housed under common farming practices in the European Union.

The diets used during the trial were produced by a commercial feed mill in the North of Germany. All pigs received a starter diet from enrolment until day 30. A grower diet was used in the period from day 28 until day 65 and from day
63 until slaughtering pigs received a finisher diet. From day 28 until 30 a blend of 50% starter and 50% grower feed was fed and from day 63 until 65 a blend of 50% grower and 50% finisher feed. Details of the diets’ compositions are
mentioned in table 1.

Table 1. Nutritional information of the basal diets used in the study. The basal diets were the same for both control and trial group

During the trial, weight gain was monitored as well as average feed consumption. Weighing of animals and feed was done at enrolment, day 35 and day 85 (first delivery to market). 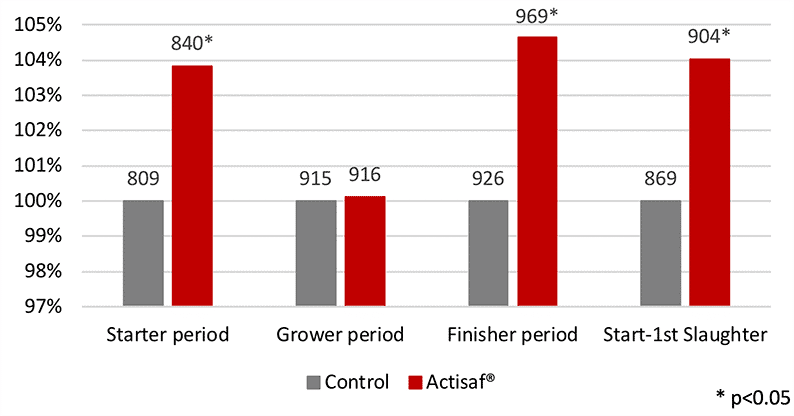 Figure 3. Especially during the starter period and the finisher period, a strong effect of Actisaf® Sc 47 is observed on the average daily weight gain (gram per head per day).

Based on the collected data, feed efficiency has been calculated for both groups. The feed conversion rate was significantly better in the trial group during the finishing period: 3,22 in the control group and 2,98 in the trial group.

The overall feed conversion rate, from the start of the trial until first day of marketing, was 2,57 for the control group and 2,53 for the trial group. All pigs were commercially slaughtered. The fattening period lasted 99,3 days on average from enrolment until the last weighing of the animals. However, the last weighing was one week before slaughtering. Carcass quality was evaluated via AutoFOM III. Dimension of meat and bacon were calculated via AutoFOM III. Carcass quality was similar in both groups, demonstrated by the Index values per kg slaughter weight which was identical. Slight differences were observed in terms of greater side weight in the Actisaf® Sc 47 group, but greater shoulder weight in the negative control group.

These studies conducted under commercial circumstances all conclude that Actisaf® Sc 47 can play an important role
in optimising nutrient availability and lead to better feed efficiency and higher growth rates. This fits perfectly with the challenge the swine industry is facing: doing more with less.

Today, we observe many differences in feeding strategies and farming conditions globally. In addition to the benefits explained above, the field experts of Phileo in collaboration with the R&D team and commercial parties around the world, have successfully conducted a vast amount of trials to proof the applicability of Actisaf® Sc 47 in various feed forms, formulations and production processes it can be concluded that optimal production of pigs is one step closer.