Posted at 09:47h in Dairy by olivier@ovm-communication.fr 0 Comments
6 Likes 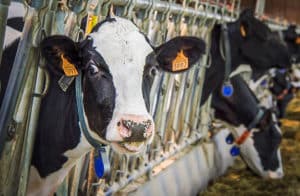 Heat stress involves a comprehensive physiological and behavioral process in dairy cows which causes rumen dysfunction, intestinal damage and immunity suppression. Finally, it negatively affects feed intake, feed efficiency, milk yield, milk quality, reproductive efficiency and disease incidence which is always one of the most negative factors for milk production all over the world.

According to Bernaducci et al. (2010), “heat stress can be defined as a physiological condition when the core body temperature of a given species exceeds its range specified for normal activity, which results from a total heat load (internal production and environment) exceeding the capacity for heat dissipation and this prompts physiological and behavioural responses to reduce the strain.”
Temperature is not the only environmental factor that affects the intensity of heat stress (HS), humidity plays also a major role. The temperature humidity index (THI) measures the combined effects of ambient temperature and relative humidity (RH) to ascertain heat load intensity (Berry et al., 1964). This index is now categorized into heat stress levels with an index above 72 THI established as the lower threshold of heat stress (Whittier, 1993; Armstrong, 1994). However, a recent re-evaluation of the THI has suggested that due to this improvement of milk production, the THI heat stress threshold should be lowered to 68 THI (Zimbelman et al., 2009).

Mechanisms responsible for altered nutrient partitioning during HS are still not totally clear but are certainly mediated by HS effects on gastrointestinal health and function (Stoakes et al., 2014). During HS blood flow to viscera is decreased whereas peripheral flow (to the skin) is increased to dissipate heat. Consequently, enterocytes can suffer from hypoxia and nutrition restriction which contribute to a reduction of intestinal barrier function permitting the passage of lipopolysaccharide (LPS) into systemic blood.

Eventually, exposure to increased ambient temperature can result in significant alterations and damage at the cellular level. Many intracellular molecular structures rely on a variety of relatively weak interactions for stabilization, and these interactions are easily disrupted by changes in the microenvironment (i.e., increases or decreases in temperature and pH). Heat can negatively affect cell components directly, such as unfolding and subsequent aggregation of proteins (Caspani et al., 2004, Roti Roti, 2008). Protein synthesis appears to be particularly impaired by heat.

What about yeast solutions?

Environmental and/or feeding strategies can be adopted to alleviate heat stress negative consequences in dairy production. However, yeast products such as live yeast, yeast parietal fraction and selenium yeast have shown promising results to be part of nutritional strategies.

Live yeast improves fiber digestion and stabilizes the rumen environment. In heat-stressed dairy cows, supplementation with live yeast reduces respiratory rate and increases milk production and milk solids. Saccharomyces cerevisiae Sc 47 (Actisaf®) is a live yeast which acts as a probiotic and, in many studies, has shown significant improvement in rumen function.

Salvati et al. (2015) confirmed the benefits of adding live yeast to the diet of cows in heat stress conditions. The authors observed similar results from the previous trial with DMI increase of 0.5 kg per day. The milk yield was increased by 1.3 kg per cow per day. Once more, an increase in daily fat and protein production was observed by the authors, which again confirmed the live yeast benefits.
Previous work on mode of action of live yeast, specifically the results obtained by Marden et al. (2008) from a comparison between live yeast and sodium bicarbonate (NaHCO3), put forward that adding Actisaf® to the diet of dairy cows improves rumen function by regulating the pH and decreasing the redox potential (Eh) which can reflect the microbiological activity and dynamics of fermentation in the rumen (Huang et al., 2017). Supplementation with NaHCO3 and live yeast had the same ability to stabilize ruminal pH after feeding but NaHCO3 had smaller effects than live yeast on ruminal Eh, fermentation, and total tract digestibility. It clearly underlines the mode of action of NaHCO3 was only to buffer excess acid in the rumen whereas live yeast prevents the accumulation of lactate and allowed better fiber digestion by strengthening reducing conditions of ruminal environment.

The evaluation of the effect of Actisaf® on the microbiota revealed that some bacteria of interest in acidosis prevention were preferentially promoted. The relative abundance of the lactate-utilizing bacteria (Megasphaera and Selenomonas) increased with live yeast supplementation as well as the fibrolytic groups (Fibrobacter and Ruminococcus) (Pinloche et al., 2013). Consequently, live yeast can be helpful to manage ruminal health during challenging periods such as heat-stress episods.

Adding Actisaf® to the diet of heat stressed cows also changes some important blood parameters like glucose which have a direct impact on physiology and metabolism of the cows during heat stress. In the study of Salvati et al. (2015), a trend was observed for increased plasma glucose with live yeast
(62.9 vs. 57.3 mg/dL). During heat stress, as previously explained, glucose is the major source of energy. Glucose is used by the mammary gland to produce lactose which controls the milk production. Increased blood glucose in heat stressed cows could explain not only an increased milk production but also better health due to more available metabolic energy for maintenance.

To go a step further, live yeast by reducing the redox potential and balancing the pH, promotes the growth and activity of rumen microflora, which leads to increased synthesis of niacin (Salvati et al. 2015) which is involved in heat dissipation through the skin and possibly elevation of cellular heat shock proteins. 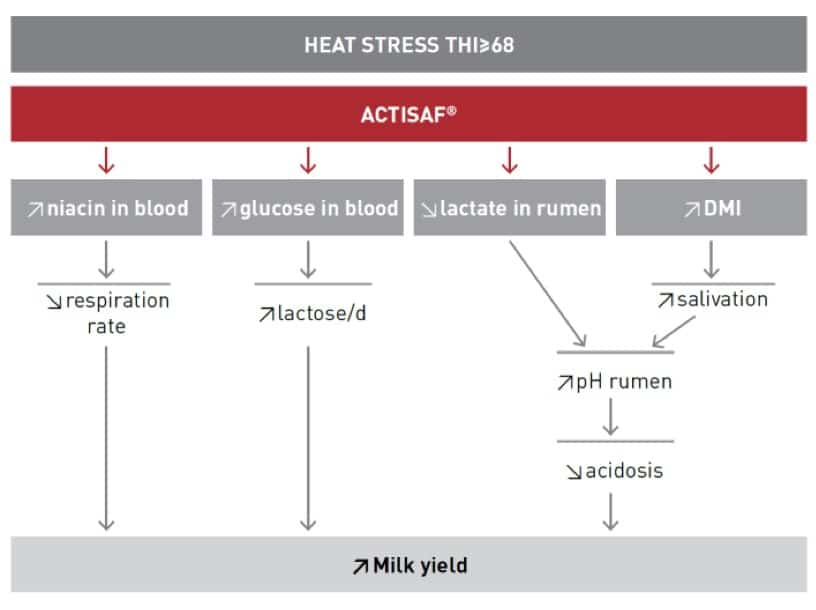 A direct action of the selected yeast fraction on body temperature and/or respiratory rate to cope with heat stress is excluded. However, it is postulated that modulation of the immune system by using yeast fraction could be helpful to counteract negative consequences of heat stress.
It is well known that β-glucans and mannanoligosaccharides modulate the immune function.
Yeast parietal fraction or Yeast cell wall (YCW) was formerly considered as an inert structure, ensuring the rigidity and protection of the protoplast (cell deprived of its wall) from environmental stresses including temperature, pH, chemicals and osmotic pressure. But, YCW is now recognized as a biologically active structure with immunomodulatory properties. It constitutes the point of interaction with the external environment and remains the privileged link with host’s immune system (Ruiz-Herrera et al., 2006). All the components of the YCW are extremely intertwined to form a complex network which constitutes its basal structure.

The three major components of the yeast wall are (i) β-glucans(ii) chitin and (iii) mannoproteins, proteins branched with mannose polymers. Most of these components can be recognized as Microbial Associates Molecular Patterns (MAMPs) by innate immune cells which possess dedicated receptors for this purpose (Pattern Recognition Receptors: PRRs). The YCW influence the activation status of macrophages, which affects the inflammatory responses and particularly cell recruitment. The YCW induces release of pro-inflammatory cytokines and chemokines (TNFα, IL6) but also anti-inflammatory cytokines (IL10) as stated by Walachowski et al. (2016).

Consequently, to complement the effects of Actisaf® yeast probiotic, the selected premium yeast parietal fraction Safmannan®, which has a specific surface structure thanks to its controlled production process, can interact with immune cells, helping to trigger a strong and satisfactory immune response specifically during heat stress period when immune function can be downregulated.

To counteract somatic cell count (SCC) increase that can occur when heat stress conditions appeared, combination of Actisaf® and Safmannan® resulted of interest. Indeed, in 8 Dutch dairy farms that had been feeding Actisaf® for a long time supplemented their cows with an additional 8 g/c/d Safmannan®, the SCC decreased over the trial period, from an average of 280 000 per farm to below 200 000.

Many stressors such as diet, transportation and heat stress can disturb the balance between the pro-oxidant and anti-oxidant systems (Estévez, 2015) of the animal. Prolonged exposure to oxidative stress can interfere with physiological processes and eventually reducing animal performance and animal product quality. Consequently, adequate dietary uptake of selenium (Se) is essential to maintain the balance of the oxidant system and reduce the negative impact of oxidative stress on animal.
Plants are considered to be the main source of dietary Se in animal feeds, as they can extract Se from the soil on which they are grown, but their Se content can vary. Therefore, feeding animals with Se is useful to prevent the animal from Se deficiency and then oxidative stress. To do so, using an organic form is of interest. Selenized yeasts can be produced in various ways, but the highly consistent selenium-enriched yeast, Selsaf®, contains mainly 2 natural organic Se components which are easily absorbed in the animal’s intestine (i) selenocysteine (SeCyst) and (ii) selenomethionine (SeMet). Studies confirm the non-specific incorporation of Selsaf®-derived SeMet into proteins, resulting in a pool of Se, in the form of SeMet in the muscle, which can be accessed during times of stress to improve the antioxidant defense.

A trial (unpublished data) was conducted to investigate the effect of selenium-enriched yeast on milk production, milk quality and health status in heat-stressed dairy cows: daily average temperature-humidity index was more than 72, which indicated that cows were subjected to heat stress for 9 weeks experiment. The rectal temperature and respiratory rate were significantly decreased (P < 0.05) in the Selsaf® group compared with the inorganic selenium group. Selsaf® can significantly reduce (P < 0.05) the number of somatic cells in milk. It can also significantly increase (P < 0.05) the selenium content of milk, and cows supplemented with 0.45mg/kg Selsaf® had higher (P <0.05) milk Se than those receiving 0.30 mg/kg Selsaf.

In evaluation of animals’ antioxidant status, it is recognized glutathione peroxidase (GPx), a selenoprotein, is a major antioxidant enzyme. Cows fed Selsaf® had higher (P < 0.05) GPx activity than those receiving sodium selenite. In addition, lipid oxidation levels can be demonstrated by measuring the level of malondialdehyde (MDA), a secondary oxidation product. Cows fed Selsaf at levels of 0.30mg Se/kg and 0.45 mg Se/kg had lower (P < 0.05) MDA contents in serum than those receiving sodium selenite at level of 0.30 mg Se/kg.

These findings put forward that Selsaf® supplementation to dairy cows can alleviate heat stress negative impacts on performances by means of a dual protection. Selsaf®‘s organic nature makes it highly bioavailable and performed by boosting both the antioxidant status and the natural defenses which is of great interest during heat stress period.