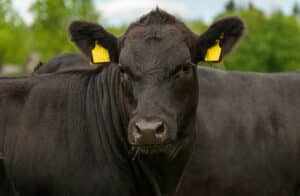 Two treatments were evaluated in finishing heifers to determine the effects of a yeast supplement on immune and metabolic response to a combined viral-bacterial respiratory disease challenge (Word et al., 20161). Thirty-two beef heifers (717 ± 10.80 lb.) were selected and randomly assigned to one of two treatments: Control (CON), receiving no yeast supplement in the ration, or yeast (YEAST), Control ration plus a combination of proprietary products (5g/hd/day + 3g carrier = 8g/hd/day) manufactured by Phileo by Lesaffre, Milwaukee, WI.

Cattle were maintained on treatments for 31 days prior to the challenge. On day -3 all cattle were challenged intra-nasally with 1×108 pfu BHV-1 and allowed to rest in outdoor pens for 3 days. On study d 0, all cattle were challenged intra-tracheally with an average dose of 3×107 cfu Mannheimia haemolytica, were fitted with indwelling vaginal temperature recording device, and were moved into individual stanchions in an enclosed barn. Whole blood samples were collected at the time of BHV-1 challenge at 1-h (serum) or 2-h (complete blood cell counts) intervals from 0 to 8 h, and at 12, 24, 36, 48, 60, and 72 h relative to M. haemolytica challenge. Data were analyzed using the mixed procedure of SAS specific for repeated measures with fixed effects of treatment, time, and their interaction. Water intake per hour tended (P = 0.06) to be greater in the YEAST group compared to CON. Nasal lesion scores tended (P = 0.07) to be decreased in the YEAST group compared to CON (2.50 ± 0.26 vs. 3.19 ± 0.26). There was no difference in cortisol concentrations or vaginal temperature between treatment groups (P ≥ 0.37). There was no treatment difference (P = 0.21) in total white blood cell counts following BHV-1 challenge. Serum haptoglobin (an acute phase protein secreted during inflammation) concentration tended (P = 0.13) to be reduced in the YEAST group compared to CON, and there was a tendency (P = 0.07) for cattle in the CON group to have greater neutrophils than CON. Neutrophil phagocytosis was not different between treatment groups (P = 0.76); however, neutrophil oxidative burst intensity tended (P = 0.13) to be greater in the treated group. Serum urea nitrogen was higher for CON (P = 0.03), possibly indicating greater lean tissue catabolism.