Posted at 22:41h in Horse by olivier@ovm-communication.fr 0 Comments
22 Likes 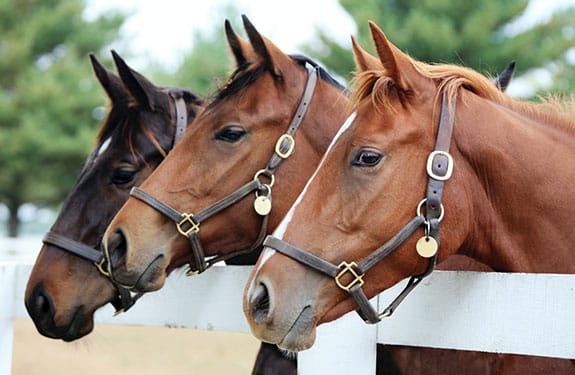 Saccharomyces cerevisiae Sc 47 is a yeast probiotic that has been used in several farm species with positive results in reducing the risk of diarrhoea and other gastrointestinal conditions. In a randomized controlled study in Arabian and Barbe horses, the supplementation of mares in late pregnancy with this yeast probiotic showed a better transfer of passive immunity in the foals after the ingestion of colostrum and an increased weight gain in these foals by six months of age (Ayad et al., 2017).

Maternal nutrition in late pregnancy plays a crucial rolein the quality of mare colostrum to maintain healthy foals in the equine industry. When foals fail to receive sufficient immunoglobulins via colostrum, they become susceptible to infections due to the failure of passive transfer. For this reason, each foal should receive an adequate level of immunoglobulin G (IgG) in the colostrum to reach serum IgG levels above 800 mg/dl for a good transfer and adequate immunity. Serum IgG levels between 400-800 mg/dl are considered as partial failure of passive transfer in the foal and its incidence has been estimated between 3% and 38% (Austin et al., 2013).

What are immunoglobulins and why are they important?

Immunoglobulins are proteins in the blood that protect an animal against pathogens. These proteins, also called antibodies, confer immediate protection to newborns via the mother’s placenta in carnivore species, a process named passive immunity. This process of passive transfer, however, changes in herbivore species. Pregnant mares, for example, have an epitheliochorial placenta, which prevents the transfer of antibodies; thus, the passive immunity in horses is via colostrum. A high concentration of IgG corresponds to a high colostrum quality, and supplementing mares with yeast probiotic can help to achieve high concentrations of IgG in foals.

In this study, the researchers selected 40 pregnant mares that were randomly assigned to one of two groups. In the first group, yeast probiotic Actisaf® Sc 47 was added to the basal diet of 20 pregnant mares (10g/mare/day) from day 300 of gestation. The second group consisted of 20 control pregnant mares that received the same basal diet with no additional supplementation. All mares were housed under the same conditions that included acclimated spaces before parturition with access to water and mixed grass hay ad libitum.

Two samples of colostrum were obtained from each mare before the first suckling. A total of 20 ml of colostrum were collected manually after discarding the first two flows of milk from each mammary gland after birth. Then, the samples were stored and frozen at -20°C. The analysis consisted of measuring IgG concentrations in mare colostrum and serum previously collected from foals using commercially available immunodiffusion kits. Figure 1 showed that the mares supplemented with yeast probiotic had significantly higher colostrum quality than the control group (+14.5%). Besides, after comparing the foal serum samples from both groups, the concentration of IgG was significantly higher in foals from mares supplemented with yeast probiotic (+21.86%). The concentration of IgG in foal serum samples before the first suckling was similar in both groups (Figure 2) as foals had not received colostrum and were immunologically naïve. These findings reflect the effect of yeast probiotic to improve transfer of passive immunity to the foals. 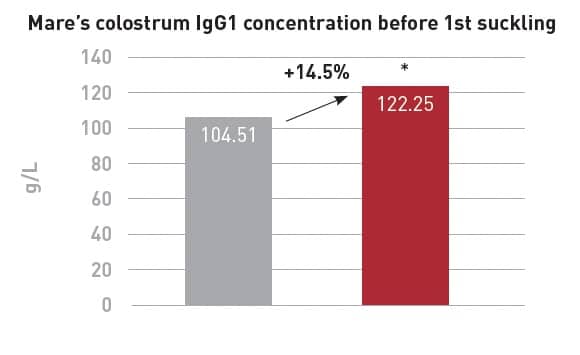 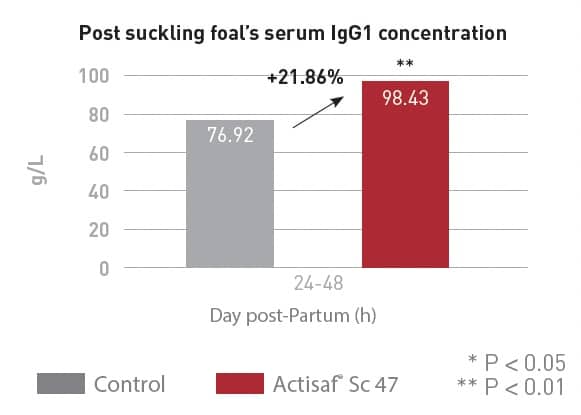 After 14 days of birth, all foals had access to the mare’s concentrate, and the body weight was registered in kilograms each month until the foals reached six months of age. Foals born from mares in the yeast probiotic supplemented group had significantly higher body weights by six months than the control group (Figure 3). The increased body weight (+21.66 kg) observed might be the result of increased nutrient absorption and optimization of the foal gastrointestinal microflora as the result of the mare supplementation. 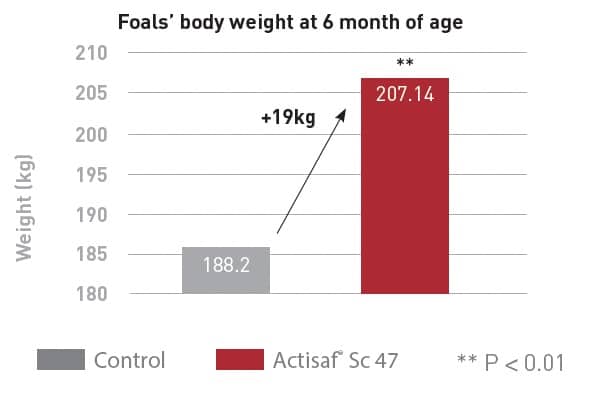 Adding yeast probiotics to the diet of pregnant mares and foals can provide many health benefits as a potential safe option to prevent conditions such as failure of passive transfer in foals. Protecting foals and promoting their early growth is of great benefit for equine breeders.