Posted at 16:16h in Actisaf, Aquaculture by olivier@ovm-communication.fr 0 Comments
0 Likes 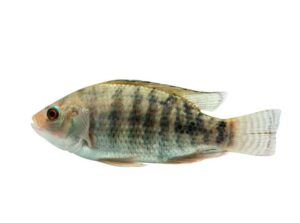 Tilapia is recognised to adapt well to different production systems. However, despite its ability to cope well with different stress factors and environments, growth performance and health status can be negatively affected under intensive culture.

Developing nutritional tools to support gut health can be a valuable strategy towards reducing pathogen impact and antibiotic utilisation.

The objective of this study was to evaluate the effect of yeast probiotic supplementation in different practical diets on growth performance and gut health of Nile tilapia (Oreochromis niloticus).
Two basal diets were formulated, one with higher fishmeal (10%) and lower soybean meal (14%) content (diet SBM14) and the other with lower fishmeal (5%) and higher soybean meal (28%) content (diet SBM28).

Those basal diets were supplemented or not with 1 g/kg diet of yeast probiotic Actisaf® (final concentration of 107 CFU/g of feed). All diets were isoproteic, isolipidic and isoenergetic.
Nile tilapia fingerlings with an initial body weight of 0.7g were hand-fed with those diets to apparent satiation, in quadruplicates, for 8 weeks. Growth performance was monitored throughout, and at the end of the trial, two fish per tank were sampled for gut health evaluation.

Results of gene transcript expression analyses revealed a down-regulation of hsp70, il1β and tgfβ in the hindgut of fish from SBM14 group when supplemented Actisaf®, indicating a reduced inflammation status and alleviation of cellular stress. The diversity of gut autochthonous microbiota was not affected by yeast supplementation, but allochthonous microbiota was enriched in Lactococcus spp in both supplemented groups.