Posted at 05:43h in Dairy by olivier@ovm-communication.fr 0 Comments
18 Likes 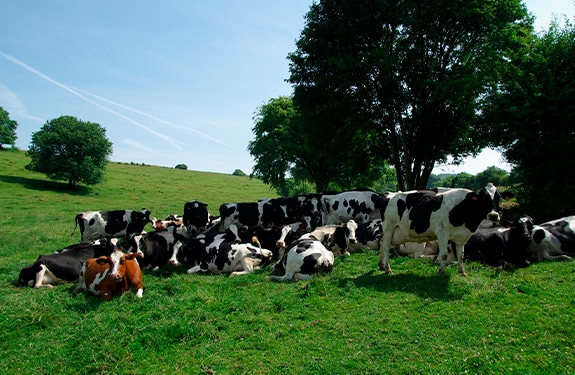 High performing dairy cows appear to be more susceptible to the damaging effects of heat stress than lower yielding stock.

Although the combination of rising temperatures and high levels of humidity is a major challenge for all milking cows, those at the top of the production league appear to be most at risk of significant milk yield reduction and subsequent health issues, according to a detailed review of current research data carried out by Phileo Lesaffre Animal Care, France.

In this context, it was previously thought that the lowest threshold point at which cows would suffer heat stress was THI 72, a rating which covers a temperature range of 23.9 °C to 32.2 °C and an RH of 65% to zero.

Now, with milk production per cow continuing to increase, the lowest threshold point has shifted to THI 68, covering a temperature range from 22.2 °C to 26.7 °C and an RH from 45% to zero.

Cows are also likely to stand much more than normal in such conditions in an attempt to cool themselves, basically by increasing their exposure to all available air flows.

“The knock-on effects of this can be devastating with heat stressed cows eating less and standing more,” said Dr. Julien. “These are both major contributory factors to the development of a negative energy balance in affected cows, resulting in an inevitable and relatively rapid fall in milk yield.

“This immediate impact leads into longer term issues, such as rising rumen acidosis, which is caused by a number of factors.

“The condition is often triggered by reduced feed intake and the impact of subsequent diet adjustments made in an attempt to retain energy levels in affected cows. Such actions need to be handled with care as the combination of a ‘hotter’ ration and the cows reduced ability to neutralise the rumen contents, directly increases the risks of rumen acidosis.

“Changes in the cow’s natural eating behaviour, such as feeding less frequently than normal, can also contribute to rumen acidosis, especially when decreased frequency is accompanied by larger meals and more acid-producing post-eating.

“Cows also typically over-eat the day following a heat wave, which is another well-known cause of rumen acidosis.”

To help farmers’ mimimise such problems, Phileo has developed and tested a range of yeast-based solutions which are designed to enhance rumen efficiency, raise immunity levels and boost the animal’s immune competency.

In trials with higher producing dairy cows, faced with even more intense heat stress (THI 69-79), feeding Actisaf® delivered 2.5% better intake and 3.7% better feed efficiency, both in comparison to control cows. As a result, milk yield was 4% better than the control with milk fat showing a 10% advantage.

Trials with Phileo’s premium yeast parietal fraction, Safmannan®, used to address immunity issues, showed the product to be effective in triggering a positive immune response. It also helped alleviate a rise in somatic cell count (SCC), which is another standard consequence of heat stress.

Selsaf®, the company’s selenium-enriched yeast product, tested as a modulator of the negative impacts of heat stress, also showed beneficial results in relation to SCC, alongside helping to maintain better mammary health in treated cows than in a control group.

Phileo’s conclusion is that all three products offer farmers additional “promising solutions” for use in alleviating the effects of heat stress in dairy cows.