Posted at 15:32h in Horse, Selsaf by olivier@ovm-communication.fr 0 Comments
22 Likes 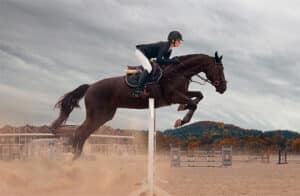 A horse’s muscle structure consists of several types of fibres, all with different characteristics and functions. In sports or racehorses, II-A fibres, which require oxygen, are important for well-trained, athletic horses. II-X fibres, which are conversely anaerobic, are key for the production of short-duration, high-intensity bursts of power (Hinchcliff, Kaneps, & Geor, 2014).

II-A fibres take their energy mainly from the oxidation of glucose, which is present in the animal’s cells or produced from liver. This chemical reaction (part of cellular respiration), releases unstable oxygenated substances called «free radicals» or Reactive Oxygen Species (ROS). Once released, ROS attack cell membrane lipids, which they break down by oxidative process. This may result in significant damage to cell structures.

Oxidative stress in horses, caused by exercise, may contribute not only to muscle damage, but also to fatigue, exercise intolerance, and reduced performance.

Selenoproteins, as antioxidant enzymes, help to lower the impact of oxidative stress

Selenoproteins are proteins in which at least one of the amino acid components contains selenium (Se). A lot of these proteins also have antioxidant properties. The best known selenoprotein is Glutathione peroxidase (GPx), a potent antioxidant which reduces the formation of hydroperoxide, one of the first free radicals to be released. GPx may also be considered as a cell-based storage reservoir of Se.

As a highly-efficient antioxidant enzyme, GPx is essential for the neutralisation of the reactive oxygen species which cause oxidative stress. Its activity is heavily dependent on the presence of Se in the body. In human athletes, oral Se supplementation significantly decreases lipid hydroperoxide levels, while increasing GPx in plasma, erythrocyte, and muscles. Although Se supplementation has no beneficial impact on aerobic or anaerobic athletic performance, it may prevent Se deficiencies among athletes which undertake high-intensity and high-volume training (Fernández-Lázaro, 2020).

In Europe, where soils suffer from selenium poverty, Se intake is often insufficient. In a study carried out in endurance competition horses, about one third were found to be deficient in selenium. This finding was subsequently associated with an increased risk of counter-performance in affected horses (Demangeon, 2007).

Maintaining optimal Se plasma levels may be important in relation to minimising chronic exercise-induced oxidative effects and modulating the impact of exercise on mitochondrial changes (Fernández-Lázaro, 2020). The daily requirement for Se in 500 kg horses is currently defined as 1 mg. This requirement increases to 1.13 mg per day and 1.25 mg per day in horses which undertake moderate to heavy exercise, respectively (National Research Council-NRC, 2007).

Selsaf® is an approved additive for use with all animal species (FEEDAP, 2020). Produced from the cultivation of a proprietary Saccharomyces cerevisiae (CNCM I-3399) strain, on a Selenium enriched substrate, Selsaf® contains both Selenocysteine and Selenomethionine, two major biologically active seleno-organic compounds. Thanks to a reliable and standardised production process, the obtained concentration in organic Se is high in Selsaf®, while the profile active seleno-compounds is
stable and consistent.

Once ingested, Selsaf® compounds are absorbed into the small intestine active transport systems. Their absorption is much more efficient than that of sodium selenite, which is passively absorbed. Due to its composition, Selsaf® can be compared to a two-stage rocket: 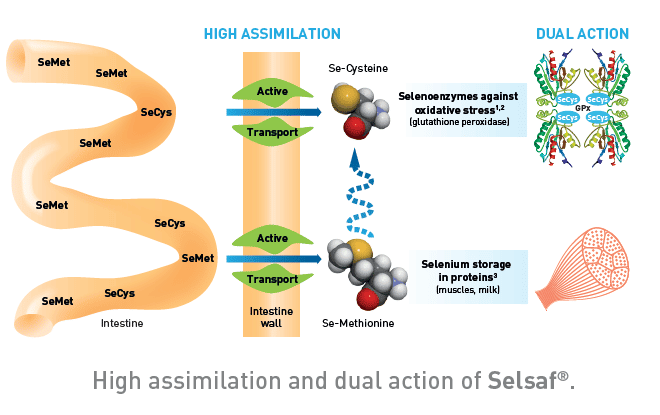 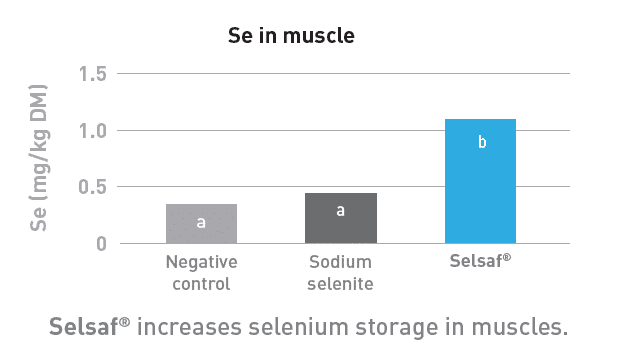 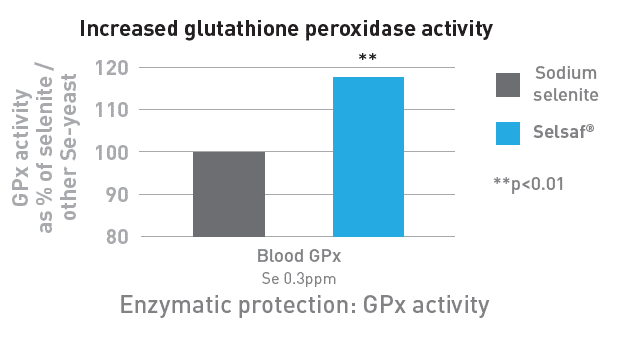 Different studies, designed to measure GPx activity in various animal species, indicate that Selsaf® is efficiently used in the construction of functional GPx. Due to Selsaf®’s seleno-organic compounds, GPx activity reaches a higher level than that obtained from supplementation with mineral forms such as selenite.

In summary, the dual effect of Selsaf® enhances selenoprotein GPx activity and increases antioxidant defence in sports horse, reducing oxidative damage. As a result, top level performance can be maintained!

FEEDAP. (2020). Assessment of the application for renewal of authorisation of seleniumenriched yeast produced by Saccharomyces cerevisiae CNCM I‐3399 for all animal species.