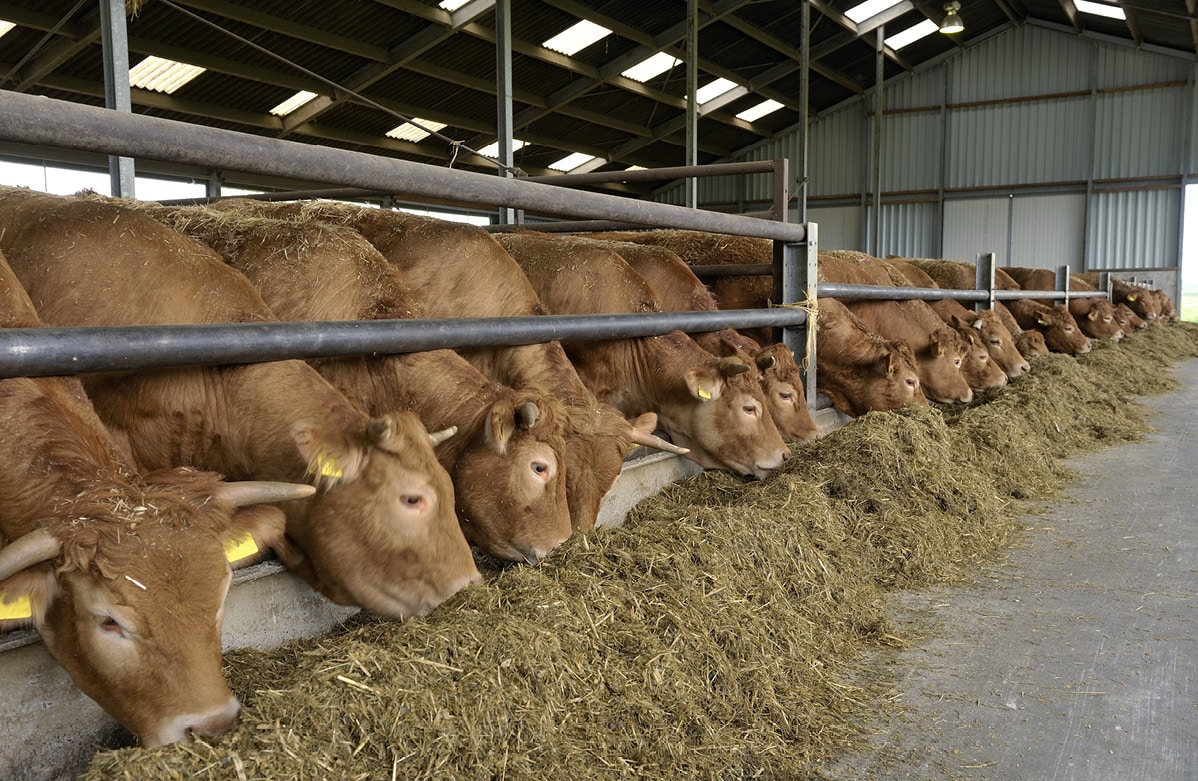 Due to global warming, climate change, and constantly rising productivity demands, ruminants are becoming more and more predisposed to oxidative stress. This is where the antioxidant capacity of the body cannot cope with the production of reactive oxygen species (ROS), as it accumulates in the body. Oxidative stress in ruminants leads to immune depression, tissue, and organ damage, and affects the animal’s health and welfare. To prevent oxidative stress, animal diets need to be supplemented with antioxidants, such as vitamin E and Selenium (Se).

Oxidative stress: an imbalance of the oxidative system

Oxidative stress, which is caused by an imbalance between the pro-oxidant and antioxidant systems (Figure 1), can lead to the disruption of physiological processes and, in due course, disease. Reactive oxygen and nitrogen species (RONS) are produced as by-products of normal cell metabolism and are, for example, necessary for cellular signalling or pathogen inactivation. Nevertheless, RONS can be double-edged swords, being powerful oxidants with the ability to interfere with the protein function, DNA, or polyunsaturated fatty acids. Fortunately, the body has developed certain control mechanisms which balance the production of RONS, or neutralise them, while still guaranteeing their biological function. On one hand, antioxidants can exist in non-enzymatic molecules, such as Vit E, Vit C or Glutathione. On the other hand, enzymes with specialised functions are also found, such as superoxide dismutase (SOD), catalase (CAT) or Glutathione peroxidase (GPx). 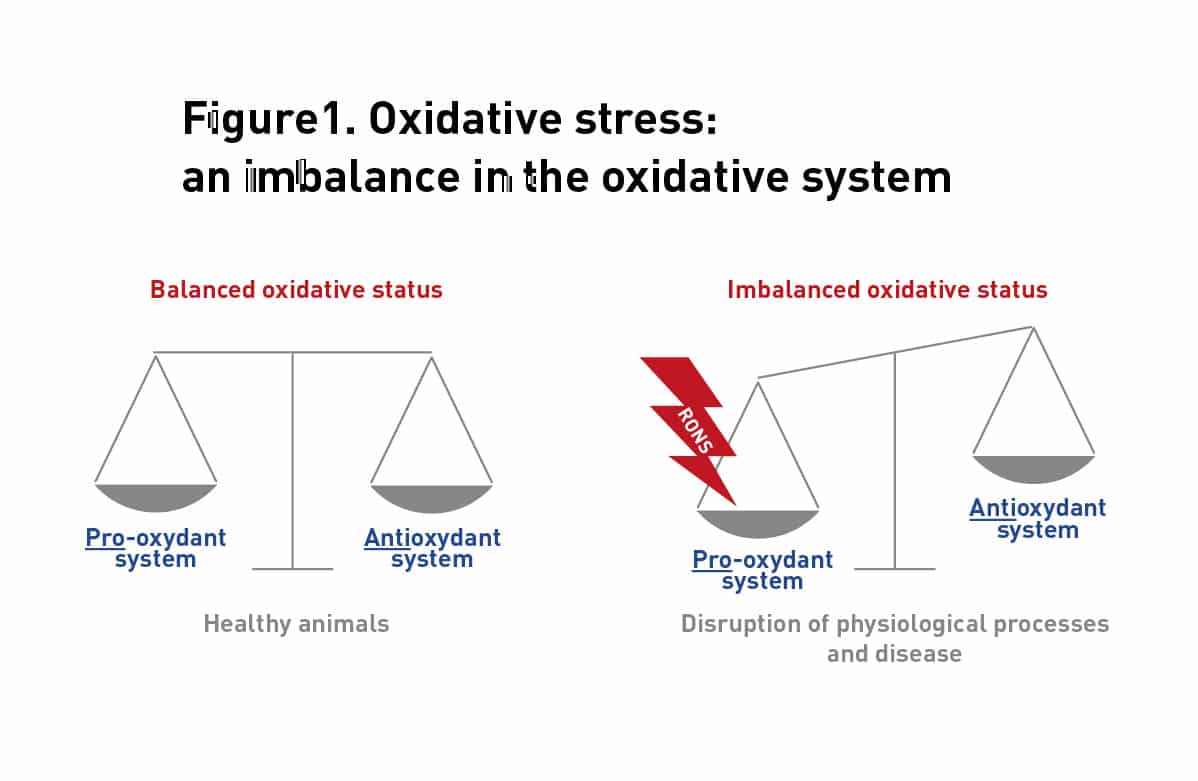 What happens during oxidative stress?

Se deficiency in ruminants causes oxidative stress, which in young calves is manifested by muscular dystrophy (white muscle disease), with typical and recognisable clinical signs. In adult animals, however, Se deficiency and oxidative stress are difficult to diagnose as they are often associated with other typical problems, such as immune depression, leading to a high somatic cell count (SCC) and mastitis, placenta retention, infertility, respiratory diseases, and so on.

An activated immune system is a major contributor to oxidative stress as the immune cells, such as neutrophils, are metabolically very active, producing large amounts of ROS. They also use an oxidative burst as a way of destroying pathogenic bacteria. In this context, they are the most sensitive cells to oxidative stress while the immune system is the first to suffer from an excessive accumulation of ROS. Providing sufficient antioxidants helps to neutralise ROS and balance the immune response (Figure 2). 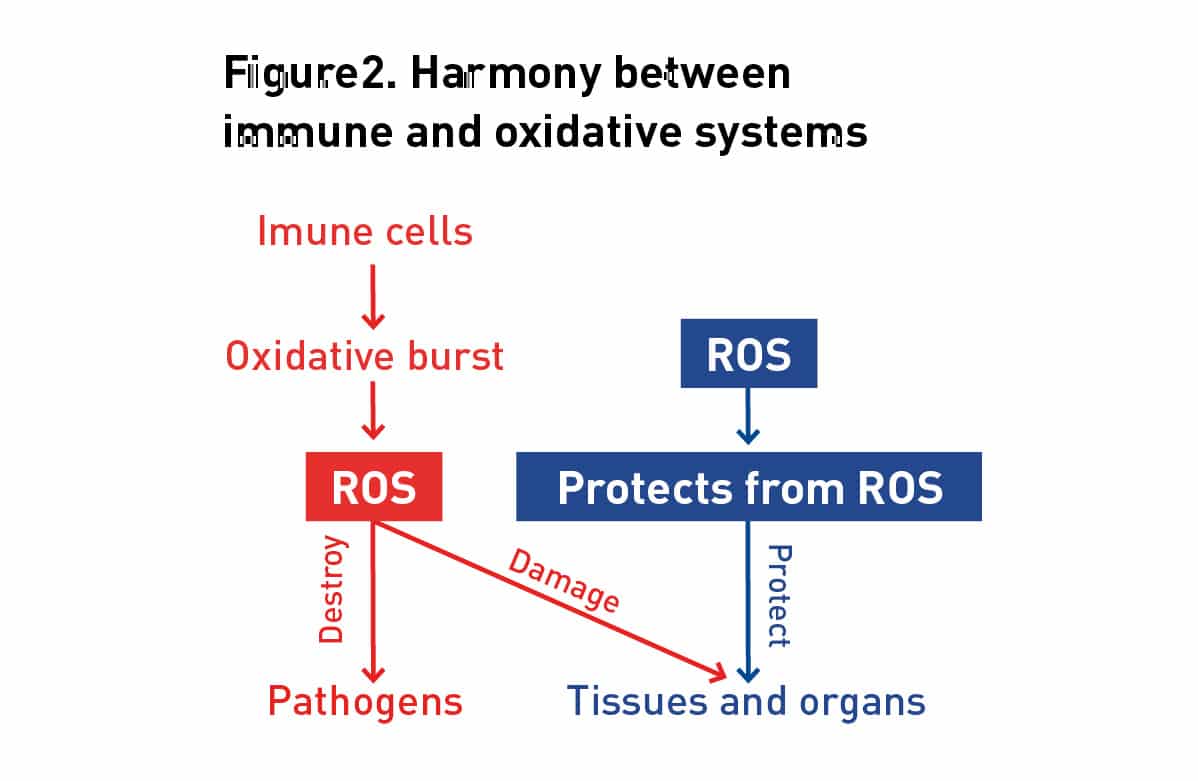 Supplementing Se in the ruminant diet is critical for the avoidance of oxidative stress. Se is only absorbed in the small intestine and its solubility is important. However, ruminants absorb mineral Se very poorly as rumen microbes reduce it to a non-soluble form that cannot be absorbed but is excreted into the environment. In comparison to monogastric animals, which are able to absorb mineral Se at levels of up to 80%, a ruminant animal’s absorption of mineral Se is only 39% (Meschy et. al., 2010).

Hence, Selsaf® is a unique source of highly digestible and bioavailable organic Se, providing best absorption through active transport in the intestines. Selsaf® also provides two major sources of organic Se: selenomethionine, comprising 70% of the Se in Selsaf®, and selenocysteine, comprising 30% with other seleno-active compounds (Figure 3). It is important to know that the active form of Se is the selenocysteine which is used in the main antioxidant enzyme – glutathione peroxidase. Selenomethionine is stored in the body proteins (muscles, meat, milk) and can be used later under high stress conditions. In this context, Selsaf® is unique in that it provides sufficient Se, as Se-cysteine, for immediate use in the antioxidant system and as Se-methionine, to be kept in reserve. 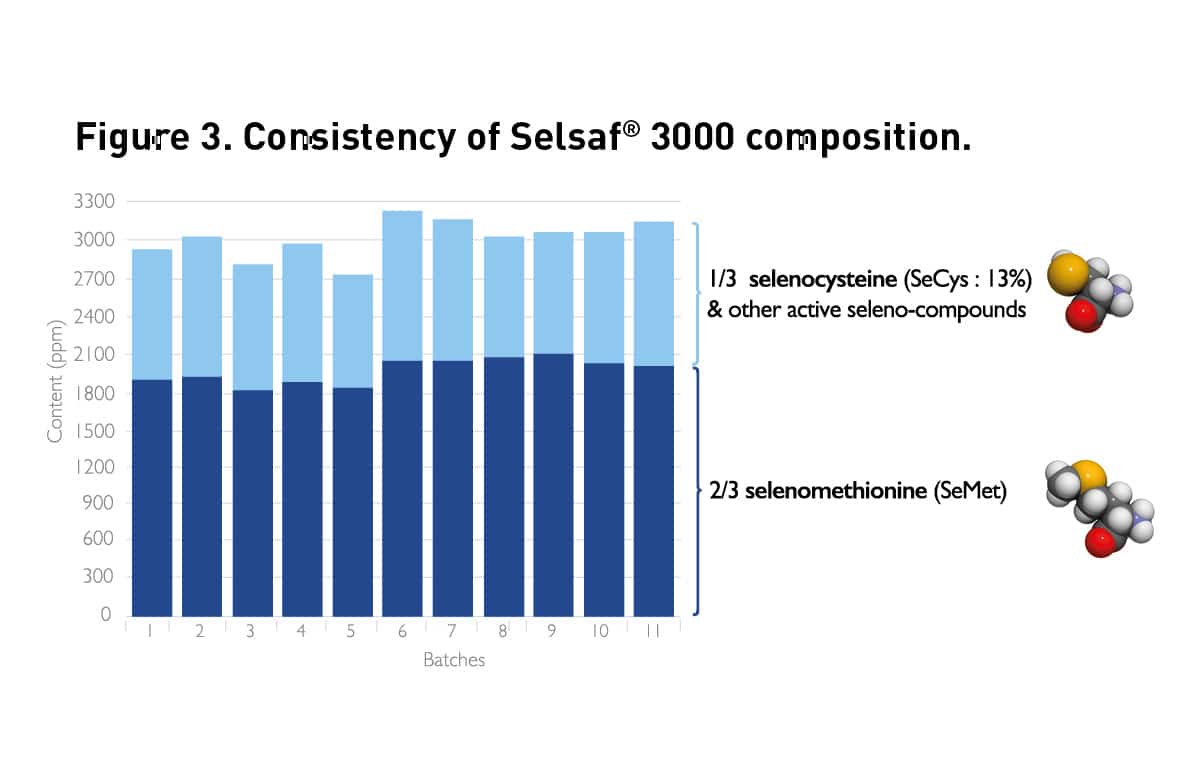 Comparative trials between Selsaf® and mineral Se (sodium selenite) in dairy cows show significantly increased antioxidant activity in the serum, increased Se content in milk and colostrum, and improved immune function, as observed by a significant reduction of SCC in the milk (Figures 4, 5, 6, & 7). 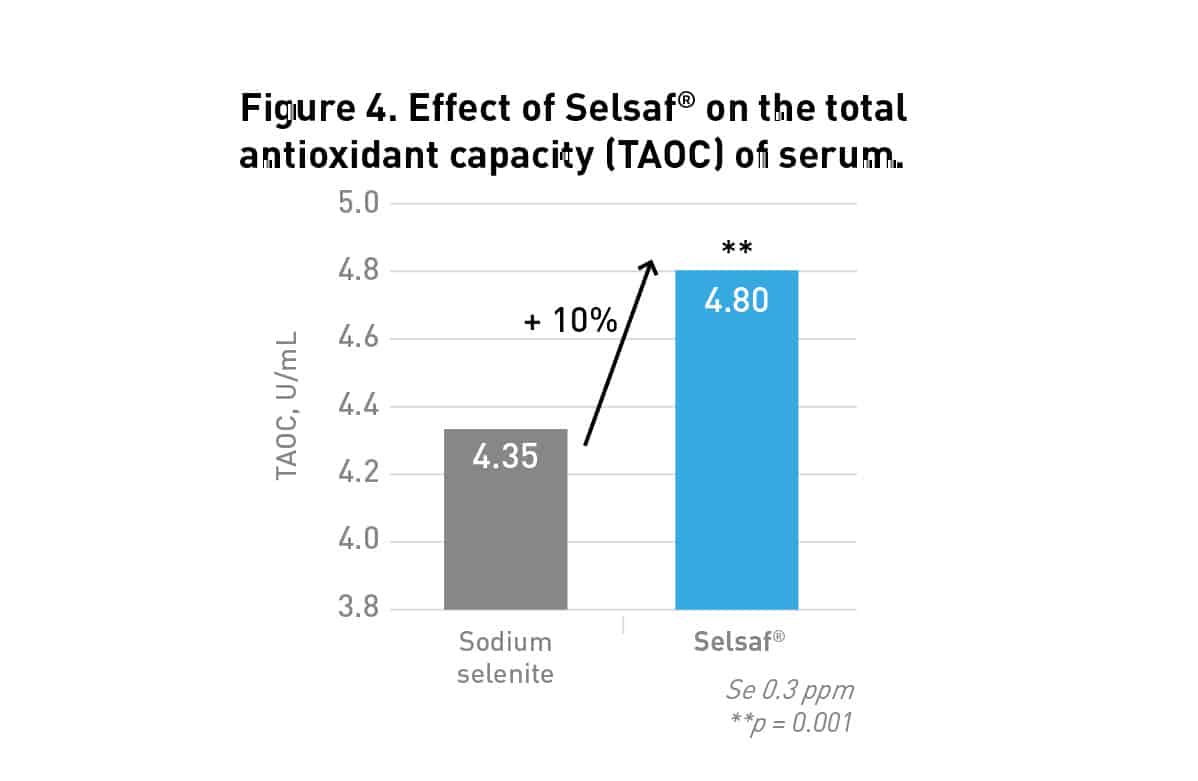 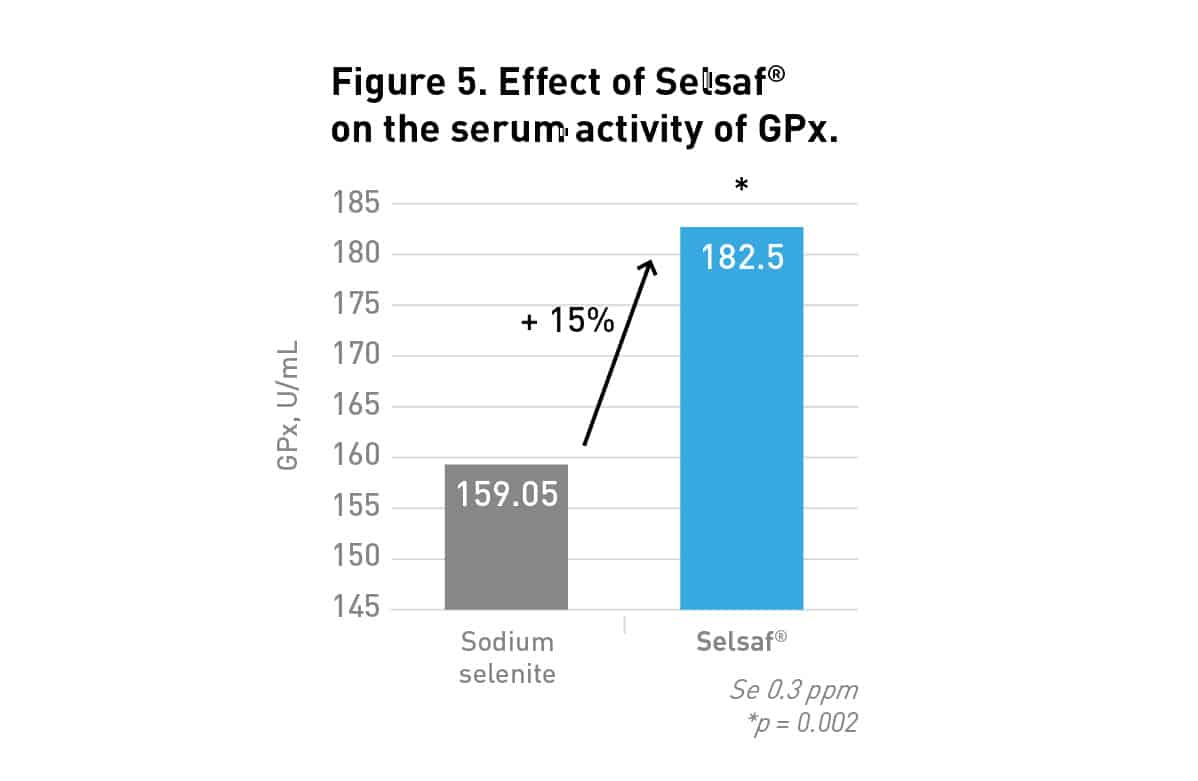 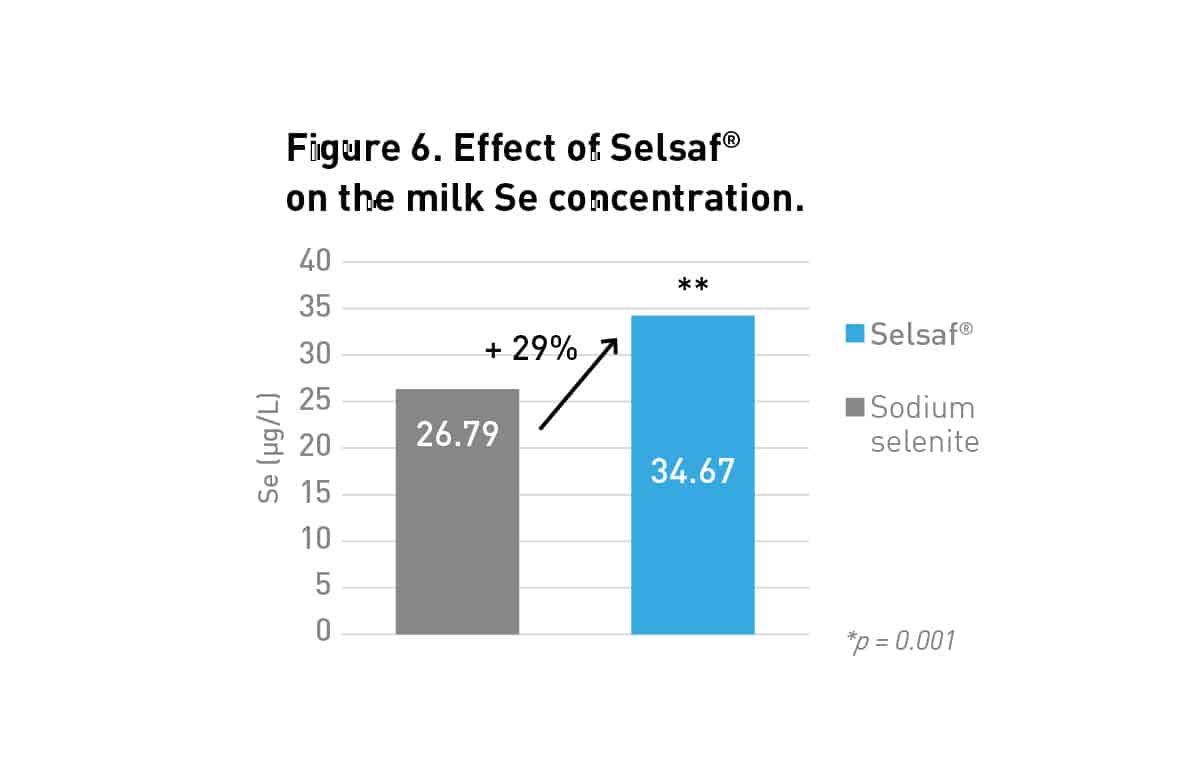 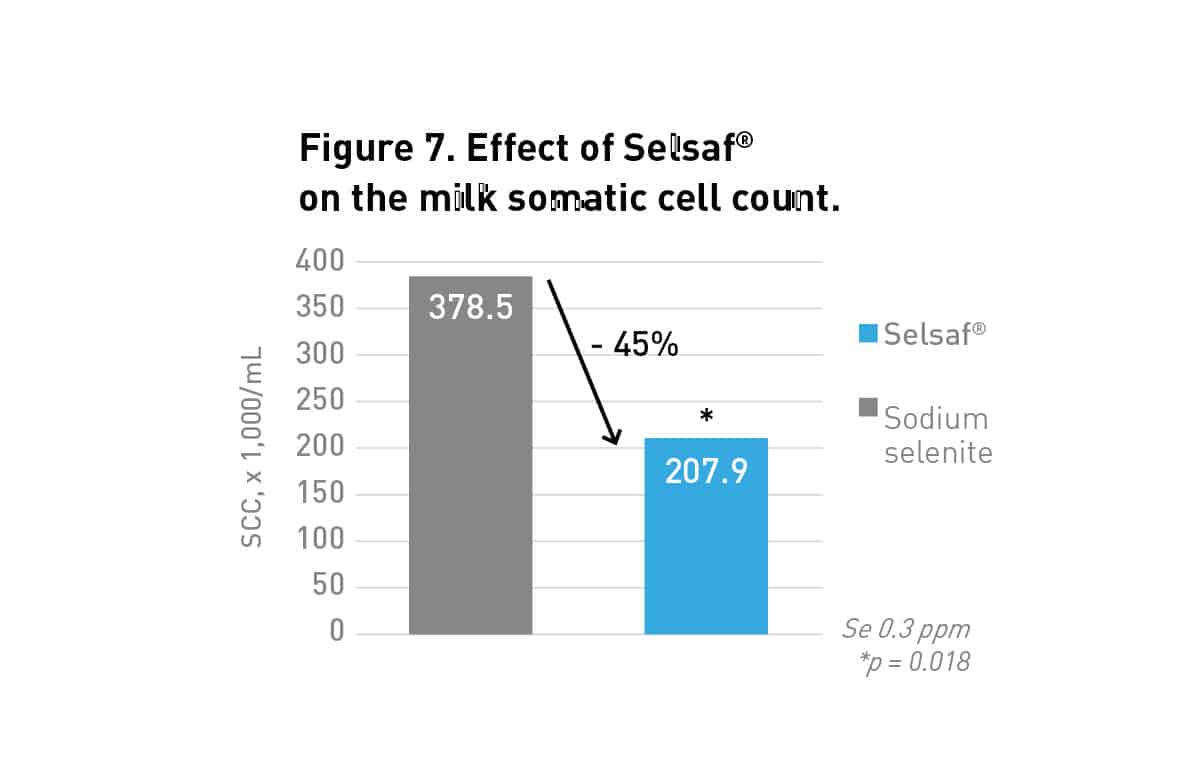 In receiving beef calves for fattening, Selsaf® demonstrates superiority over sodium selenite where the higher antiradical capacity of the blood was observed, along with higher antibody titers after vaccination. This study not only shows the efficacy of Selsaf® as a unique source of highly bioavailable Se but also the importance of antioxidant capacity to achieve a better immune function (Figures 8 & 9). 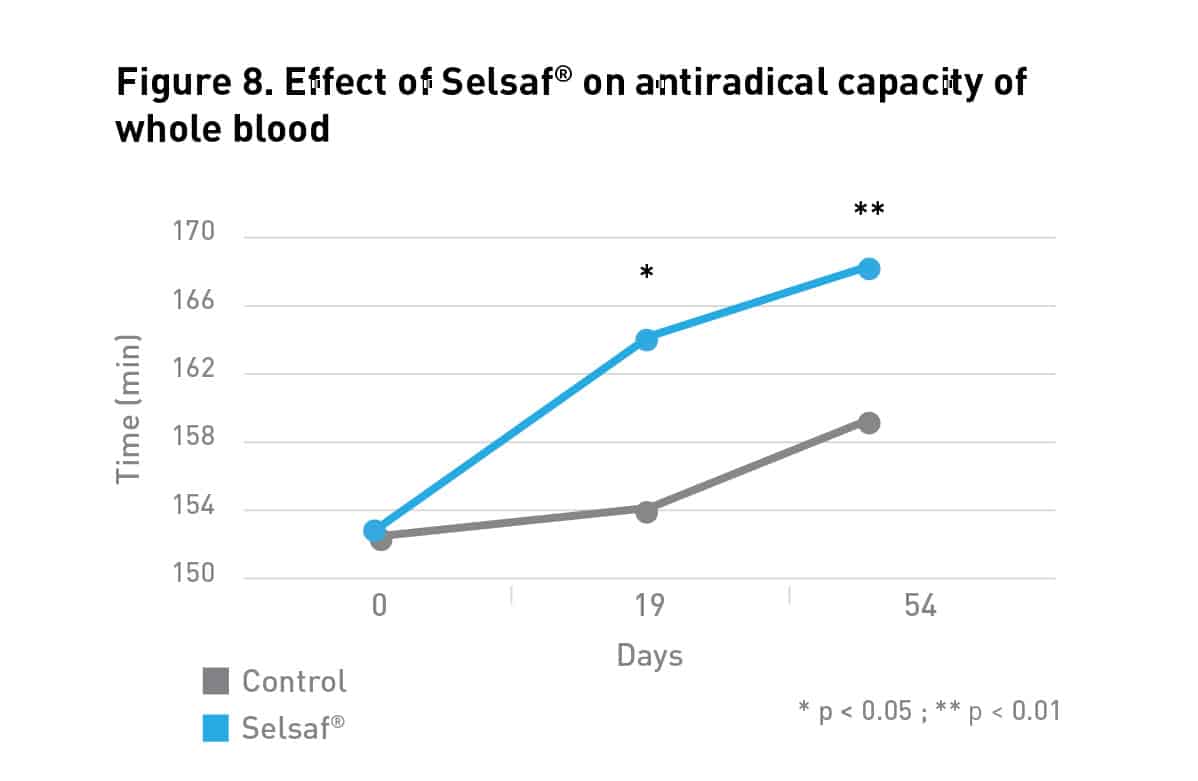 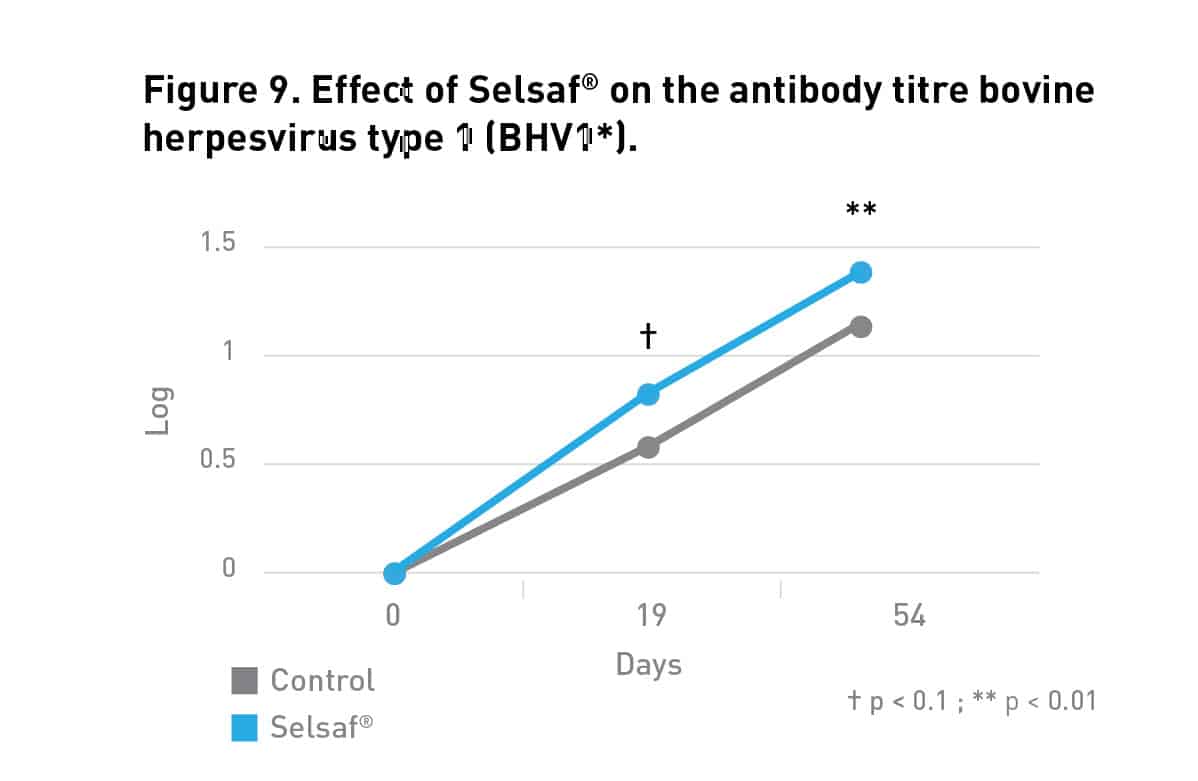 Se is also associated with meat quality, with meat antioxidant capacity being related to meat tenderness, appearance, and shelf life. Supplementing Selsaf® to beef cattle during the final two months of their finishing period significantly improves meat quality and shelf life in comparison to meat from cattle given sodium selenite (Figure 10 & 11). 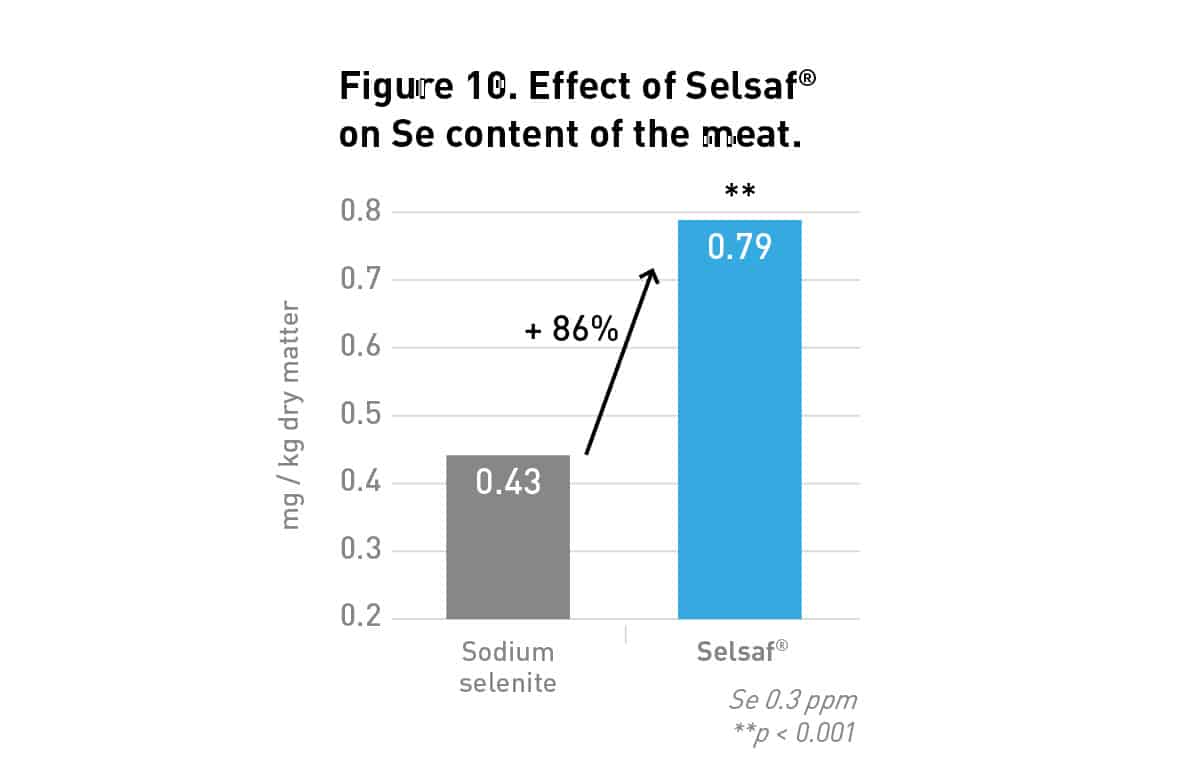 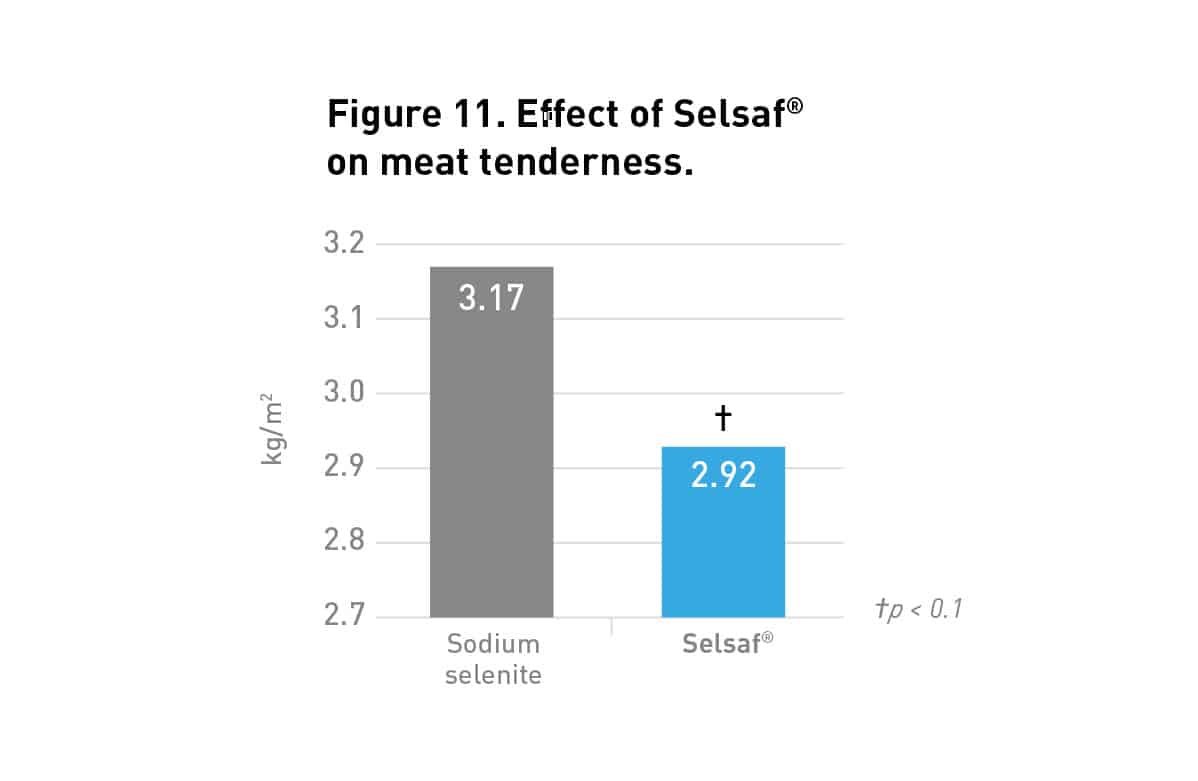 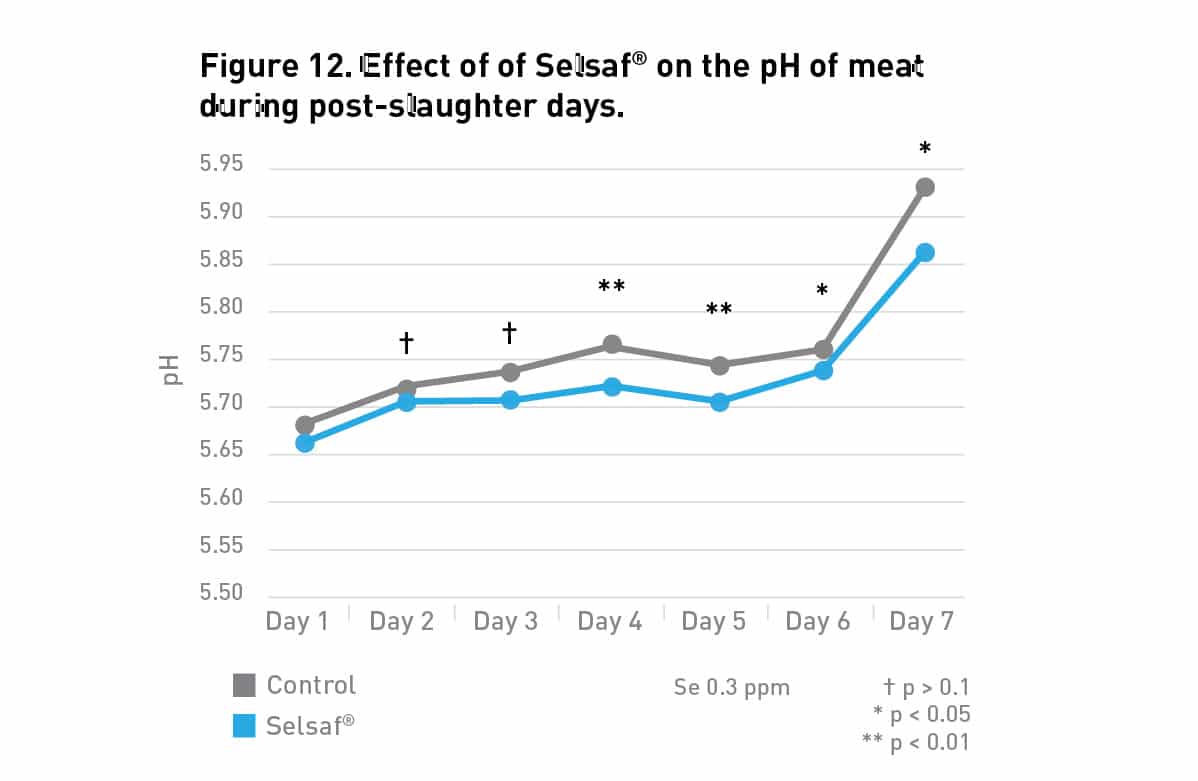