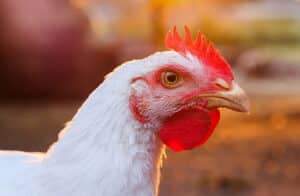 Lack of adequate controls or decontamination procedures render many breeding chicken flocks susceptible to avian salmonellosis, either from contaminated environments or between birds and their young within the flock. Salmonella Pullorum (S. Pullorum), causing pullorum disease, and Salmonella Gallinarum (S. Gallinarum), causing fowl typhoid, are two major salmonellosis diseases that can seriously impact poultry flock health. When left unchecked, these two diseases can cause significant economic losses to the poultry industry via diarrhoea, poor growth, weight loss, and possibly death. Surviving chickens can become carriers, thus these diseases can be passed onto offspring during egg-producing periods. Previous control methods used antibiotics for both prevention and cure, but increases in multi-drug resistant strains ‘means’ that other more environmentally sound solutions must be developed.

Yeast polysaccharide, a natural and high-efficiency immunopotentiator, is contributing to the reduction of antibiotics use in poultry farming. Improving industrial production processes can now produce Safmannan®, a high-quality yeast postbiotic.

A study published in Poultry Science by Zhou et al., 2019 demonstrated that Safmannan® reduces the population of Salmonella Pullorum and Salmonella Gallinarum, improves gut health and thus reduces the probability of Salmonella colonising the poultry intestine.

In this study, one hundred and sixty 1-day old commercial chicks were divided into groups A and B, along with groups C and D, which served as the challenged but non-treated and non-challenged and non-treated control groups respectively. During this 42 days experiment, group A was fed a commercial diet (without any antibiotics) supplemented with Safmannan® at 250 g/t of feed, group B was fed the same commercial diet as group A but an organic acid (Acidipure, 1.5 mL/L) was added to the drinking water, and groups C and D were fed the same commercial diet without any supplements. At seven days, chicks in groups A, B, and C, were evenly divided into two subgroups. A1, B1, and C1 groups were orally challenged with 0.5 mL S. Pullorum (2.83 x 108 CFU/bird), while groups A2, B2, and C2 were orally challenged with 0.5 mL S. Gallinarum (2.0 x 109 CFU/bird). Birds were weighed daily and observed for clinical signs. At 1, 2, 3, 4, and 5 weeks post challenge, birds were tested for S. Pullorum and S. Gallinarum antibodies using plate agglutination tests. At 42 days, birds were sacrificed, weighed, and organs aseptically excised. Cloacal swabs, cecum, cecum contents, and liver samples were used to culture the challenged Salmonella strains.

Birds in challenged, non-treated control groups had white diarrhea, exhibited poor growth and weakness, and upon necropsy, livers with necrotic white foci as well as a softened heart with pericardial effusion were observed in these birds. Birds from Safmannan® group (A1) were clinically normal and no lesions in the liver were observed. 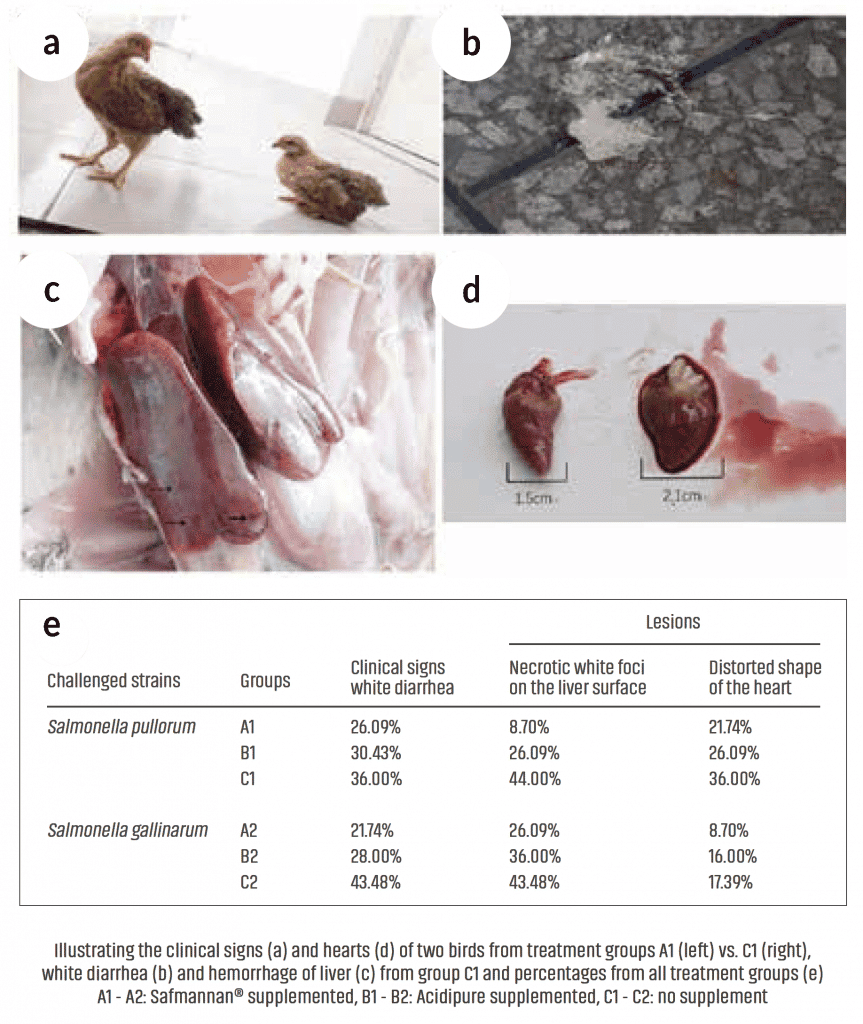 Salmonella infection negatively impacts bird growth, and is thought to be due to strong inflammatory responses in the intestinal mucosa sequestering excessive nutrients to fight infection rather than promoting normal growth. When challenged with S. Pullorum pathogenic bacteria, birds supplemented with Safmannan® weighed significantly more than those supplemented with organic acid, or with a standard diet. Birds challenged with S. Gallinarum and supplemented with Safmannan® or organic acid were both heavier than control birds. Thus Safmannan® improved feed conversion in pre-breeding pullets and mitigated weight loss caused by Salmonella infection.

As such, Salmonella bacteria was isolated from significantly fewer S. Pullorum-challenged birds supplemented with Safmannan®, compared to organic acid and control birds. This result was replicated in S. Gallinarum-challenged birds, indicating that birds supplemented with Safmannan® are able to more quickly clear both infections.

A 120-day field trial was also undertaken, where 8,835 one-day-old Three-Yellow chicken breeder chicks from disease-free grandparent flocks were randomly divided into three groups (minimum of 2,000 birds per group). Group 1 was fed a commercial diet (no antibiotics) supplemented with Safmannan® at 250 g/t of feed, group 2 was fed the same commercial diet and had 1.5 mL/L organic acid (Acidipure) added to the drinking water, and group 3 was fed the same commercial diet without any supplements, as a control group. Each group received the same amount of daily feed. After 120 days, all pullets were tested for antibodies against S. Pullorum and S. Gallinarum using the plate agglutination test.

To achieve long-term success in reducing Salmonella contamination in poultry meat and products, the risk of both vertical and horizontal transmission needs to be lowered.