A new legislation to ban the prophylactic use of antibiotics in animal production was brought into effect on 28th of January 2022 in EU. In addition, the European Commission adopted the farm to fork strategy in May 2020, with an objective on reducing the total EU sales of antimicrobials for use in farm animals and aquaculture by 2030 with 50% (Nunan C., 2022). In the meantime, also other regions and countries, like US, Brazil (for export) and China, are intensifying the regulations on the use of antibiotic growth promoters as consumer demands for poultry products raised without antibiotics is increasing. To ensure a successful evolution to an era with less antibiotic usage, experts have emphasized on the need for a transition to more sustainable farming facilities where animals have a good health and welfare. As such, policies on farm antibiotic reduction, need to be combined with guidelines on how to improve animal husbandry and animal health.

Gut – nourishment and protection for animals

It is becoming more and more clear that animal health and performance are closely linked to gut health. In addition to being the primary organ for feed digestibility and nutrient absorption, the gut also functions as barrier protecting the animal from pathogens and their toxins. This barrier includes a physical part existing out of a mucus layer produced by underlying goblet cells that are embedded within epithelial cells (Figure 1). These epithelial cells are themselves closely connected to each other by tight junctions that prevent the passage of unwanted substances through the space in between adjacent cells. Next to this physical barrier, also chemical substances, existing out of digestive secretions and components of the innate and adaptive immune system take part in the barrier function. Further the lumen of the digestive tract is colonized by the microbiota, who modulates the intestinal barrier and contributes to the intestinal health together with the gut barrier. 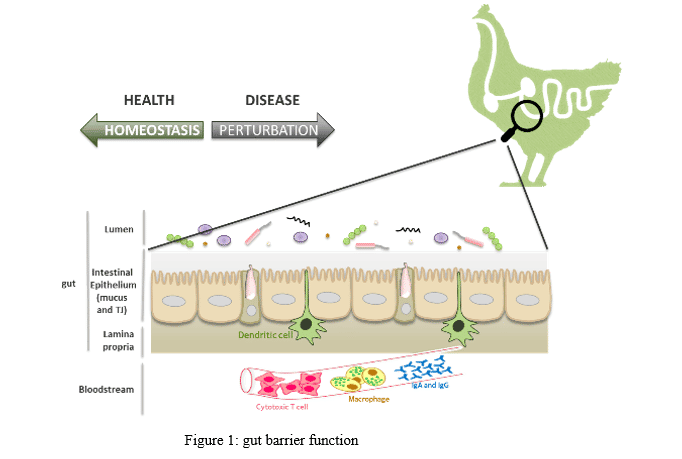 In poultry production, the birds can face several challenges over a short period of time, from vaccination to dietary changes. Any such stress can have a negative impact on intestinal health, resulting in a potential infection and reduced performance. To safeguard the genetic growth potentials of the birds, good management and husbandry practices can be combined with the supplementation of dietary solutions promoting growth and gut health.
One of those solutions is the yeast postbiotic, Safmannan®, obtained from autolysis of a proprietary Saccharomyces cerevisiae strain and characterized by a high batch-to-batch consistency with at least 20% α-mannans and 20% β-glucans (1,3 and 1,6) to achieve repeatable performance in animals.

It is well known that dietary features modulate the composition of the bacterial community and their metabolic products which in turn affects the bird’s nutrient digestion, immunity, gut health and thus overall performance. Increasing feed prices and reduced availability of raw materials are forcing nutritionists to work on more alternative diet formulations which might change regularly in composition during the production period. Thus, significant production losses can be encountered. Fortunately, supplementation of these diets with the yeast postbiotic, Safmannan, have shown to improve the performance levels of the birds by reducing the harmful effects of nutritional challenges and dietary stress (Fowler et al., 2015). After 3 weeks on a variable diet, the birds supplemented with Safmannan® demonstrated significantly superior growth (864 g) compared to the birds on the control diet (760 g) (p<0.05). This study demonstrated that Safmannan® can compensate for deficiencies in feed quality and reduce the harmful effects of a nutritional challenge.

Additionally, the supplementation of low-quality diets with Safmannan® has shown to improve the intestinal immunity of nutritionally challenged birds. This was demonstrated in another trial by a tendency of the postbiotic to increase IL-6 expression (P=0.08) (Graph 1) and lymphocyte infiltration (P=0.054) at day 3 of age. In contrast, lymphocyte infiltrations and inflammatory lesion scores were significantly reduced (P=0.036) in the supplemented group at day 21 of age, indicating a fast recovery of the supplemented birds from stress (Graph 2).

Furthermore, research has demonstrated that administration of the yeast postbiotic can modulate the intestinal microbiota composition to one exhibiting higher diversity (Graph 3). 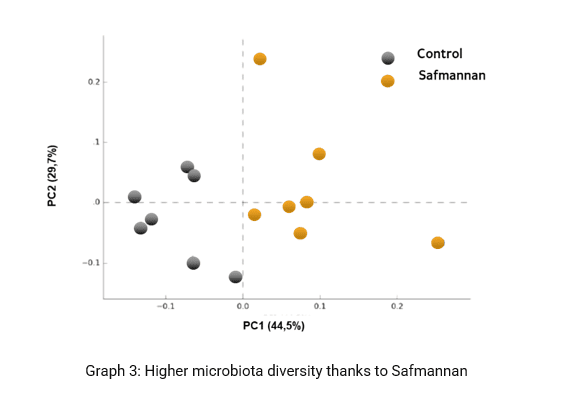 Significant increases in beneficial genus such as Roseburia, Ruminococcus torques, Eubacterium Hallii and Shuttleworthia were observed in one trial, while the Enterobacteriaceae colonization was decreased in the supplemented group compared to the control group (Graph 4 and 5).

As an inhabitant of the healthy animal intestine, Ruminococcus torques probably increased its prevalence in the supplemented animals due to its capacity to convert/metabolise complex polysaccharides into nutrients that are beneficial for the host (La Reau & Suen, 2018). Additionally, species belonging to the genus Eubacterium hallii and Roseburia are known to be able to interact with the acetate and lactate to produce butyric and propionic acid which have the capacity to strengthen the epithelial barrier function and positively impact the microbiota by reducing the pathogenic species (Engels et al., 2016; Rivière et al., 2016).

Next to promoting the beneficial microbiota, the postbiotic also helps to eliminate harmful bacteria. The later probably attributed to the presence of the α-mannans who will adhere to type-1 fimbriae of pathogenic bacteria including Salmonella, making it more difficult for these pathogens to colonize the intestinal epithelium (Posadas et al., 2017).

The effect of the postbiotic on reducing Salmonella was demonstrated in a Salmonella Typhimurium challenge model where administration of Safmannan® enhanced the performance of the challenged birds after challenge (P=0.014), while decreasing the lesion score (P=0.0006) in the cecum and the Salmonella colonization in ceca (P=0.001) on D28 of the trial (Graph 6 and 7). A reduced colonization of Salmonella in the liver (P=0.038) also indicates that an increased intestinal health reduced the translocation of the pathogen to systemic organs (own unpublished data). 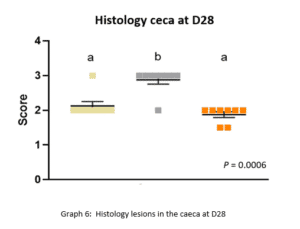 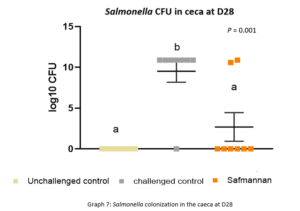 Additionally, the detection of higher geometric mean for flagellin IgA (P=0.0006) antibody titers in the Safmannan® group compared to the unchallenged and challenged control groups on day 28, also shows the positive effect of the postbiotic on the intestinal immune system and health (own unpublished data).

Arising health problems in intensively farmed chickens and production losses have stimulated the use of antibiotics as prophylactic routine treatment rather than metaphylactic medicine for sick animals only. However, the ban of prophylactic use of antibiotic in animals has already entered into force in EU. China has also forbidden incorporation of antibiotic in commercial animal feeds. This global change is undoubtedly an important challenge for all poultry producers, meanwhile it’s also the opportune moment to increase birds’ welfare by giving them more sustainable dietary solution like the yeast postbiotic, Safmannan. Gut health is key for the evolution to a post antibiotic era and Safmannan, with high level of mannans and β-glucans is demonstrated to be one of the powerful and necessary tools for a successful transition  By increasing diversity of the microbiota, promoting the persistence of beneficial bacteria while creating an unfavorable environment for potential pathogens like Salmonella, Safmannan can help the birds to be more resilient, reach excellent production performance, with less and less antibiotics.