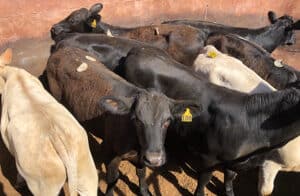 Commingled sale-barn calves are often at highrisk of experiencing respiratory disease after transport and during the first month of the growing phase on pasture or in pens. A recent 56-day study (to be published) was conducted on 120 steers and 120 heifers; (n=240; BW=403 ± 29 lbs.) purchased via an order buyer in Waynesboro, TN and shipped approximately 400 miles to the Mississippi Agricultural and Forestry Experiment Station, White Sand Branch Beef Unit in Poplarville, MS.

Upon arrival the cattle were vaccinated against IBR-PI3, BRSV, BVD, clostridial agents, and treated with an anthelmintic. Mass metaphylaxis was not practiced in this study. The cattle were individually identified and weighed and 15 ml of blood was obtained via jugular venipuncture (day 0 and 56) for future analysis of serum urea nitrogen, non-esterified fatty acids and IGG (this analysis has not been completed yet). The cattle were stratified by sex and within each group were randomly assigned to a commercial receiving supplement (targeting 1% of BW consumption) containing either no additives (CON) or 10g/head/day of proprietary yeast products (YP; Phileo by Lesaffre, Milwaukee, WI) and placed on one of sixteen 3 acre pastures (15 head per pasture, 8 pastures per treatment) containing a mix of Bahia grass, Bermuda grass, and crabgrass. Prior to the study, pastures were clipped to a uniform height, and a biomass value was determined for each pasture using an infrared forage biomass reader calibrated with individual hand clipped samples. All cattle had access to free-choice mineral while on pasture. All cattle were supplemented daily at 0700 and the amount fed was recorded and adjusted based on the previous day’s consumption. Cattle were monitored daily for symptoms of bovine respiratory disease (BRD) based upon clinical illness scores (CIS; 1=normal, 2= mild illness, 3=moderate illness, 4=severely ill, or 5=moribund, near death). Cattle with a CIS of 2 or greater with a rectal temperature (RT) of 104 oF were considered morbid and treated with tulathromycin (1.1 mL/100 lbs. BW). After a 7 d post treatment interval (PTI) if the animal was still displaying symptoms of BRD and had an elevated RT it was treated with 2.0 mL of tilmicosin phosphate/100 lbs. of BW and was considered a treatment failure. If the animal continued to display symptoms of BRD and continued to have an elevated RT, it was treated with 4.5 mL/100 lbs. of BW of oxytetracycline. After the third treatment if the animal continued to express morbidity, it was removed from the study as a “chronic”. All data were analyzed using PROC GLIMMIX of SAS.

The authors speculate that if the proprietary treatment could have been fed for a few weeks prior to commingling at the sale barn, as is recommended by the manufacturer, more dramatic performance differences could have been detected between the CON and YP. However, this was not possible. Nonetheless, some positive differences and trends were noted in performance, as summarized below:
• YP calves had an 11% higher ADG than CON (1.30 vs. 1.17 lbs.; P=.10)
• YP calves had heavier final weights at the end of the study relative to CON (476 vs. 468; P=.09)
• The percentage of calves treated at least once did not differ between treatments (P=.61, 82-84%), however there
was a tendency for a 44% reduction in second treatments in the YP calves vs. CON (9.90% vs. 17.82%, P=.13)
• 2nd treatment medicine costs per pen for YP calves were reduced by 53% vs. CON ($18.15 vs. $38.92; P=.05)
• Total medicine cost/head was numerically lower for YP calves ($19.89 vs. $21.17; P=.18)
• Based on the numerical data in this study, a calculated Return on investment (ROI) for the YP calves was $7.12 per
head