Posted at 10:29h in Dairy by olivier@ovm-communication.fr 0 Comments
22 Likes 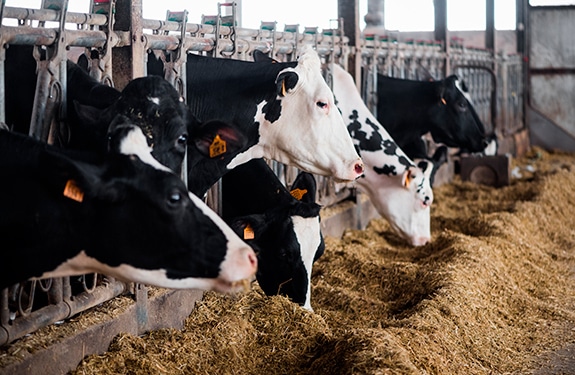 More than 85-90% of the forage’s fiber could be degraded in a well working rumen.

The original neutral detergent fiber (NDF) determination changed during the time; up to date, the use of sodium sulfite, a-amylase and ash correction give us a more refined estimation of the cell wall content in feedstuffs. The last acronym used to identify the structural carbohydrates is now called aNDFom. The aNDFom is composed by a potentially digestible fraction (pdNDF), and another portion which is considered completely indigestible (iNDF). In the past, the iNDF was estimated with a fixed ratio with lignin amount (Lignin*2,4), while now it can be analytically determined in vitro at 240h or in situ at 288h. These long fermentations give a “residue” called uNDF. Many commercial laboratories are now equipped with NIRs curves that can provide rapid and economic evaluation of all different fiber fractions in feedstuffs.

The evaluation of the digestion rate of pdNDF fraction is important in order to have a better estimation of the forages characteristic and of the available fiber for cellulolytic bacteria in the rumen.

The inclusion in the rations of forages with fiber characterized by a faster rate of degradation improves fiber utilization and daily dry matter intake, which is the main factor related to milk production.

Mainly represented by pectins and some fraction of hemicellulose; soluble fiber (SF) generally is not directly analyzed, but estimated using the following equation:

SF is considered a very rapid “fuel” for cellulolytic bacteria. Legumes, “white grains”, and by-products, like beet pulp, are rich in these compounds.

Different trials have been done to evaluate possible replacement of forages and starch with soluble fiber sources. Results are generally interesting, since milk produced is not affected, while milk fat increases thanks to an improved butyrate production (both ruminal and intestinal). A significant result is related to a slower fattening process of cows in mid lactation when dietary corn was replaced by beet pulp. In this stage of lactation, endocrinal and metabolic asset varies, and peripheral tissues are more insulin–sensitive. Insulin production is stimulated by propionate produced in the rumen from starch, and by the glucose absorbed in the intestine. In conclusion, with a more appropriate use of SF it is possible to reduce the risk of “fat-cow syndrome”. On the other hand, it is also important to remember that if the soluble fiber escapes the rumen, it could reduce the absorption of other nutrients in the intestine, being responsible of several disorders, like diarrhea, and caecal abnormal fermentations. These effects are well known in monogastric animals, in particular when cereals like barley, oat or wheat are used.

Recent researches suggest that the adequate amount of uNDF to be fed is between 0,28 – 0,48% of cow body weight or around of 9-11% of the dry matter in order to maintain chewing and rumination time. Furthermore, daily ration must provide an adequate amount of “long” fiber from forage, which is responsible of maintaining the right chewing time, saliva production and physiological motility of the rumen. This parameter known as physically effective fiber (peNDF), first introduced by Mertens many years ago (1997), has been widely revised in the last few years. The main factor to consider for peNDF calculation is the size of the particles; however, even particle’s weight, amount of uNDF, and rate of digestion of pdNDF have a great impact on peNDF efficacy in terms of rumination time and eating behavior. Currently, the daily individual chewing time could be measured in several farms, thanks to specific sensors applied to the animal’s neck. For high yielding cows, rumination time should be over 450-480 minutes a day; in these conditions, rations can be more precisely adjusted to optimize the digestive function of animals.

Farm strategy to improve the forages fiber degradation in the rumen

The fiber degradation in the rumen is promoted by the:

b-longer retention time of particles inside of rumen; this should happen when intake is limited and when forages particles are longer than 2-3 cm;

e-availability of minerals for rumen bugs

At the farm level, we can improve the efficiency of fiber utilization by using the forages with highest intrinsic digestibility in the ration for the most productive cows. Furthermore, it’s possible to efficiently use the forages with the low intrinsic digestibility including them in the ratios for the growing heifers and for cows on the first phase of dry period; the high capability to retain the forages inside of the rumen of these animals, as well as the high pH and forages content of the diet, permit the highest utilization of the pdNDF.

It is well known that dietary inclusion of forages characterized by a high intrinsic fiber digestibility could significantly improve dry matter intake, and consequently support a higher milk production especially for the fresh cows. The main reason of this result is related to the lower fill effect of the high aNDFom digestibility in the rumen.

At the same time, a higher intake allows a higher inclusion of forages in the ration, with a better control of the rumen environment and less risk of acidosis or other digestive disorders.

Milk fat content is enhanced by the use of higher quality forages (> 40-45%DMI), by the reduction of unsaturated fat in the ration (< 2,3-2,4% DMI), and by supporting the rumen fermentation with adequate levels of simple sugars like sucrose (6,5-8%DMI).

The true protein (casein in particular) content in milk can be promoted by higher intake of digestible carbohydrates that support more rumen microbial protein production and amino acids for the casein mammary gland synthesis; the most frequent limiting amino acids are methionine, lysine and histidine. The improvement of true milk protein percentage is also related to the energy status of the cow and the intestinal glucose availability. It is important to remember that the quantity of fermented carbohydrates in the rumen is limiting for bacterial growth and consequently for the availability of the amino acids in the intestine. In particular starch inclusion in the ration needs to be considered in terms of degradable and escapable fractions in order to maximize the result; even if we currently have insufficient precision in measuring this parameter in laboratory and properly predicting the rumen degradation, a possible approach is to limit the use of total starch at 26-27%DMI with 16-18% DMI as escapable. Sources as well as the technological treatment of cereals and co-products are important to be considered by the nutritionist.

The production of forages with intrinsic higher fiber degradability is the most important factor to control the animal performances in the farm.

The efficient fiber degradation is enhanced using constant and stable rations over the time, controlling the rumen fermentation pattern and covering the microbiota requirements and pH fluctuation with appropriate feeding management. The use of selected yeast as well as some additives can help to maintain and improve the rumen microbiota ability to digest the fiber.