The concern for Salmonella infections and antibiotic resistance demands the use of safe and effective new interventions in the poultry industry. Yeast postbiotics have been proven to reduce the cecal load of Salmonella in birds, and consequently, the shedding in the environment.

According to the World Health Organization (WHO), unsafe food causes 600 million cases of foodborne diseases and 420,000 deaths each year. Foodborne diseases are caused by eating food contaminated with bacteria, viruses, parasites, or chemical substances, and contamination can occur at any stage of the food production, delivery, and consumption chain. The alarming number of cases responds to the world’s population growth and the increasing demand for food, which puts greater responsibility on food producers to ensure food safety and prevent harmful substances from reaching final consumers. Salmonellosis, for example, is a leading cause of foodborne illness in many countries, with eggs and poultry being primary vehicles of transmission. Eggs are food products that play an important role in supporting the growing global population and provide the final consumer with one of nature’s highest quality sources of protein, vitamins, and minerals that are essential for a healthy diet. Total egg production worldwide rose from 61 million tons in 2008 to 76.8 in 2018; however, the increasing demand for egg production also carries a secondary effect on the transmission of Salmonella as a public health concern.

The Centers for Disease Control and Prevention (CDC) estimates that Salmonella bacteria cause about 1.35 million infections, 26,500 hospitalizations, and 420 deaths in the United States every year. The U.S. Food and Drug Administration (FDA) estimates that 79,000 cases of foodborne illness and 30 deaths each year are caused by eating eggs contaminated with Salmonella. The prevalence of Salmonella represents a major concern in the poultry industry due to the negative impact on the quality of the products destined for human consumption, reduction of production performance, and economic loss for poultry producers. Some prevention and control programs have been developed to protect the health of the birds, ensure the safety of the consumers, strengthen the reliability of the poultry production chain, and prevent vertical and horizontal transmission of multiple pathogens. Such measures include microbiological monitoring, increased biosafety measures, vaccination of flocks, sanitization of feed, and the inclusion of feed additives in the diet.

Probiotics and postbiotics have gained more attention from researchers and producers due to their efficacy against Salmonella colonization and the increased demand for eggs and poultry free of antibiotics. Recent studies have focused on the use of yeast postbiotics such as Safmannan®, a selected yeast fraction from Saccharomyces cerevisiae, due to its immunostimulant effect, which has been demonstrated in several animal species, including poultry. This yeast postbiotic is the focus of extensive research as new solution to reduce the use of antibiotics for pathogen control. Research has also shown that supplementing birds with yeast postbiotic may enhance the immune response and reduce the number of pathogens by binding bacteria and creating a complex gut microflora. In a study conducted by Imunova Análises Biológicas, Safmannan® supplementation led to significant changes in the microflora of broiler birds; microflora was more diverse and beneficial bacteria were significantly increased. Other studies have shown that birds fed with Safmannan® are more resilient to pathogens and environmental stressors, and exhibit enhanced performance, with improved growth and egg production.

In avian species, the intestines play an essential role not only for nutrients absorption but also as a barrier for pathogens. The caecum, an organ used for fermentation, has an abundant and complex microbiota that has also been reported as a pathogen reservoir for zoonotic pathogens such as Salmonella. Therefore, a recent study at Texas A&M Poultry Research Center evaluated the efficacy of Safmannan® in reducing the load of Salmonella Typhimurium in ceca of hens. For this study, 90 pullets were divided into two groups in large pens under controlled lighting; one group was supplemented with the Safmannan® at 500 g/t in the basal diet for three weeks, and the second group was used as control. The birds’ diet was adjusted, following nutritional recommendations, and the lighting was increased daily at 17 weeks of age. 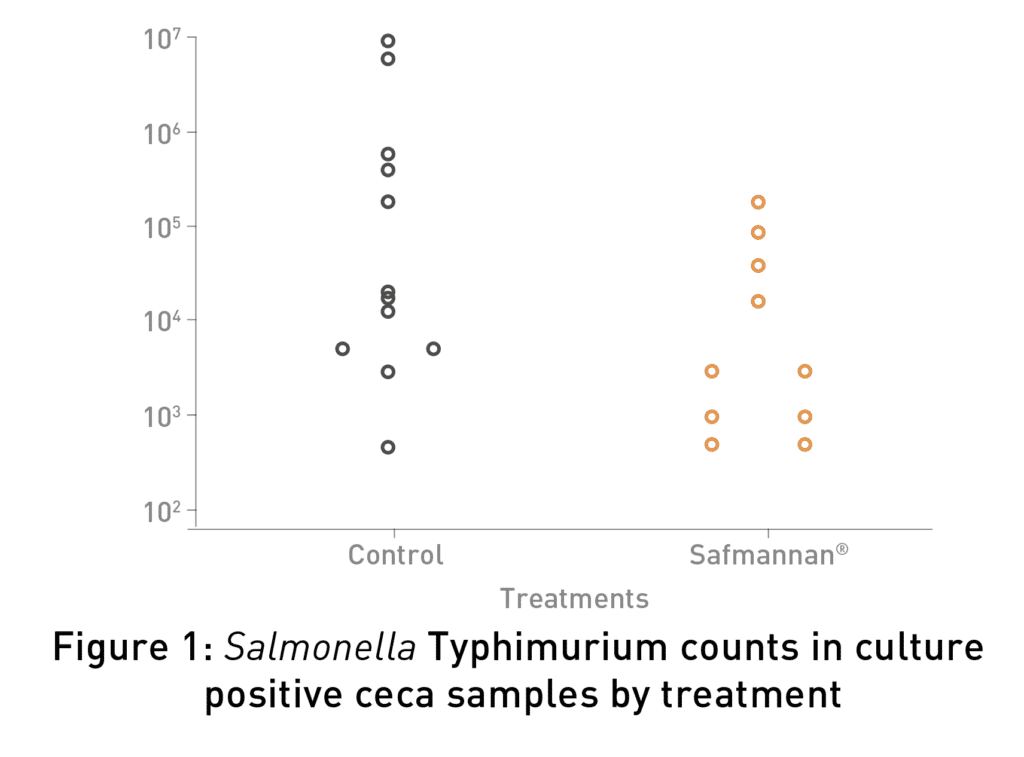