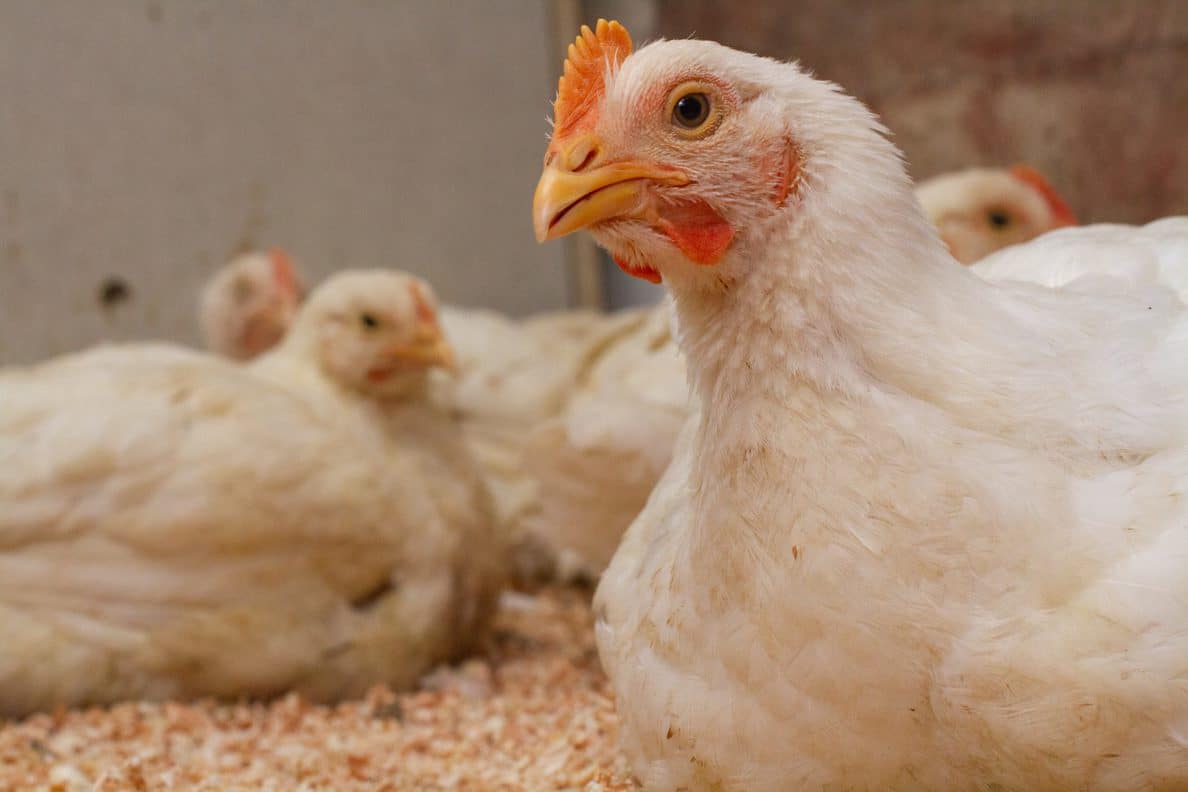 Actisaf SC 47 HR+ is a new generation yeast probiotic proven effective in poultry to support gut integrity. The studies outlined here demonstrate various performance benefits when Actisaf was fed even in the presence of various challenges. Specific strain selection and proprietary manufacturing processes allow Actisaf to be fed in a wide range of feed types including pelleting. Actisaf is resilient and retains viability despite feed manufacturing stresses such as heat, humidity, compression, and friction. 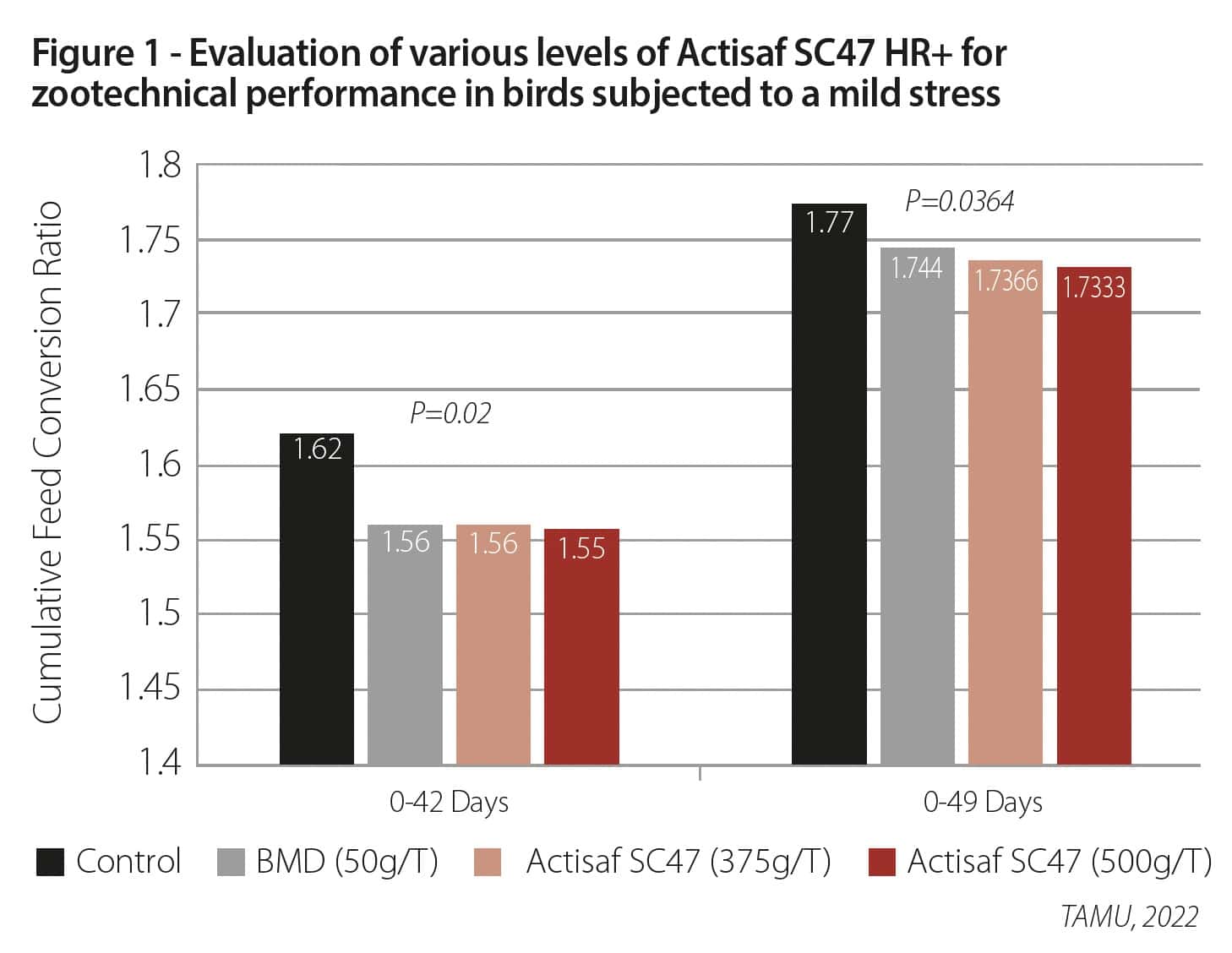 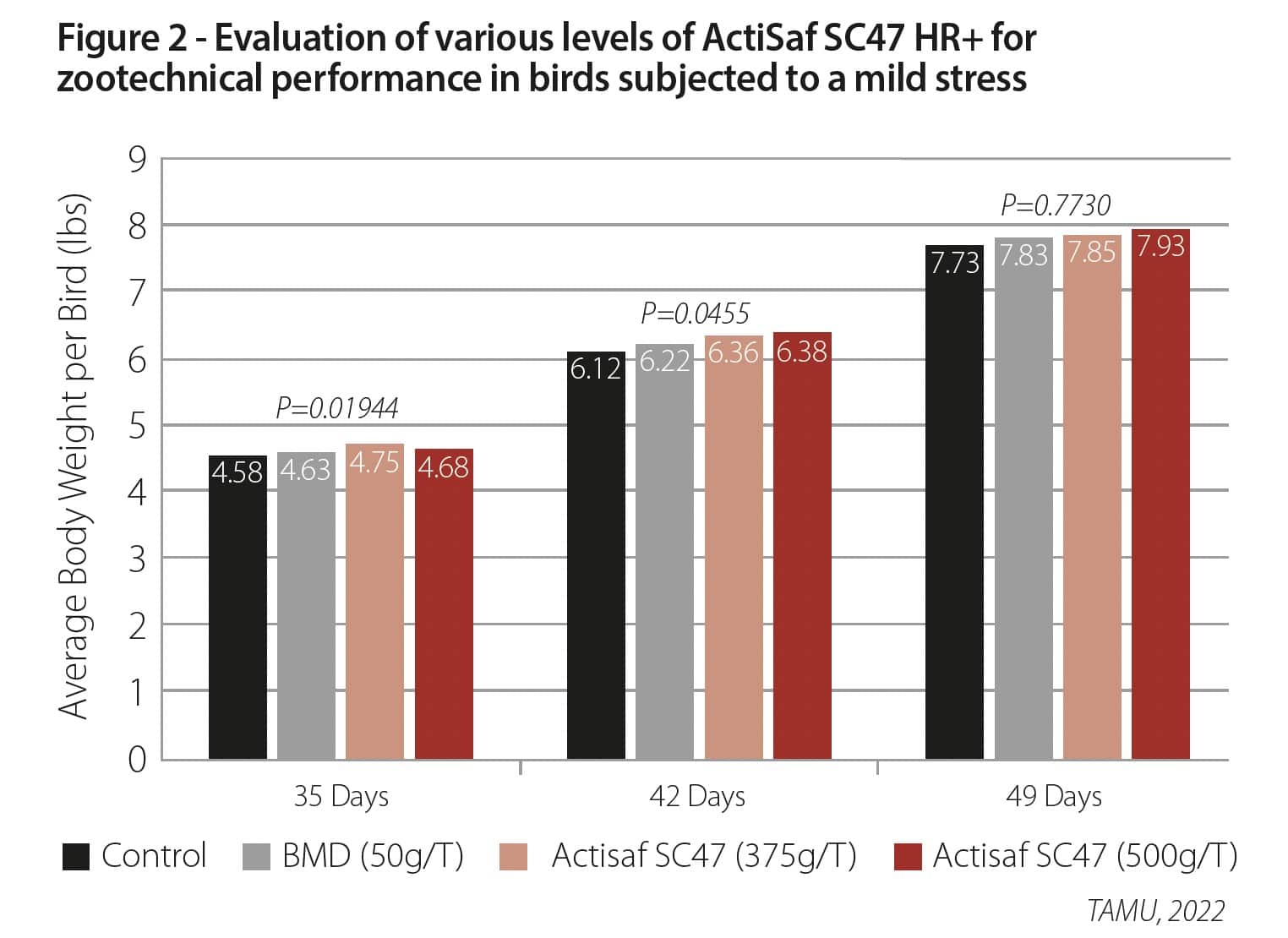 Objective: The objective of this study was to evaluate the effects of ActiSaf SC47 HR+ on broiler performance in a simulated mild challenge scenario. Birds were dosed at day of age with a 2x live coccidiosis vaccine and were fed a corn-soy diet with 5% DDGs throughout the study, and were raised on used litter. The objective of this study was to evaluate ActiSaf SC47 HR+ in a dose titration, where the dose was held constant at either 250g/T, 375g/T, or 500g/T respectively. Performance metrics including mortality adjusted feed conversion and body weights were monitored throughout the trial. This trial included 240 birds per treatment group, in 12 pens (20 birds per pen).

Objective: The objective of this study was to evaluate the effects of ActiSaf SC47 HR+ on broiler performance under a Campylobacter jejuni challenge. A total of 480 birds were housed in 16 floor pens (30 birds per pen). Birds were challenged at 14 days of age with C. jejuni and were necropsied at 33 and 47 days of age. Performance metrics including mortality adjusted feed conversion and body weights were monitored throughout the trial. 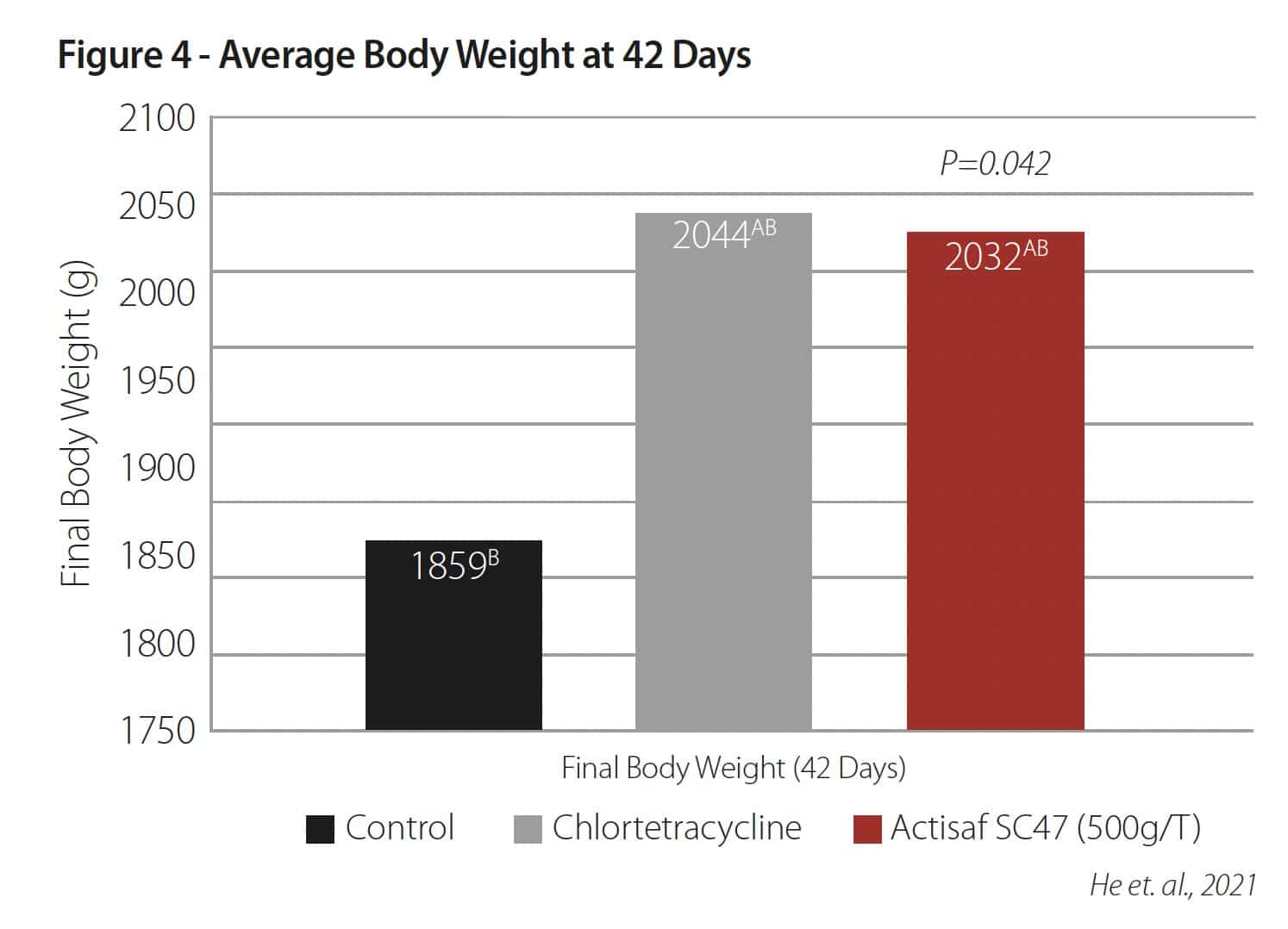 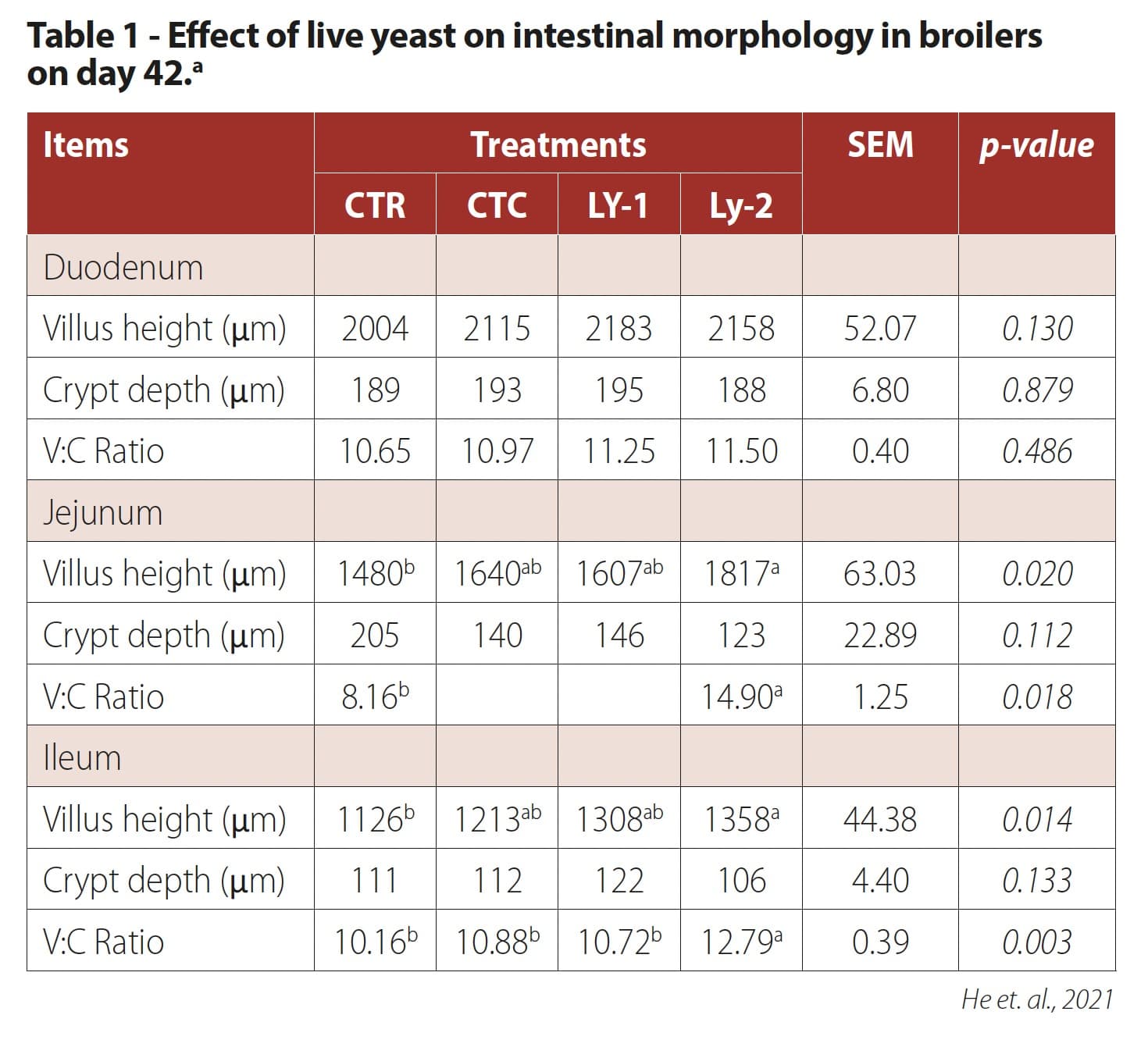 Objective: This study evaluated the effects of live yeast (LY, Saccharomyces cerevisiae) on growth performance, nutrient digestibility, immune function, antioxidant status and intestinal morphology of broilers. A total of 224, 1 day-old broilers were assigned 4 treatments (7 replications, 8 chicks each) and fed a basal diet control group (CTR); antibiotic group (CTC) fed the basal diets with chlortetracycline at 75 mg/kg; LY-1 and LY-2 groups treated the basal diets with LY at 500 and 1000 mg/kg, respectively. Final body weight was greater (p < 0.05) in LY-2 group compared with the CTR. Crude protein retention was higher (p < 0.05) in both LY groups than that of the CTR. After immunization of birds with Newcastle diseases and Infectious bursal disease vaccine, the antibody titers were higher (p < 0.05) in LY-2 fed group than the CTR or CTC on day 35. Super oxide dismutase and catalase enzyme values were increased (p < 0.05) in LY groups than those of the CTR on day 42. Total cholesterol was lower (p < 0.05) in the LY-2 group than the CTR on day 42. Villus height in jejunum and ileum was higher (p < 0.05) in the LY-2 fed group than the CTR. Live yeast can be useful as a possible alternative to antibiotics in broilers.

Throughout multiple phases of broiler production Actisaf SC47 HR+ demonstrated performance benefits when birds were directly challenged. Benefits from these trials include: