Posted at 14:59h in News by olivier@ovm-communication.fr 0 Comments 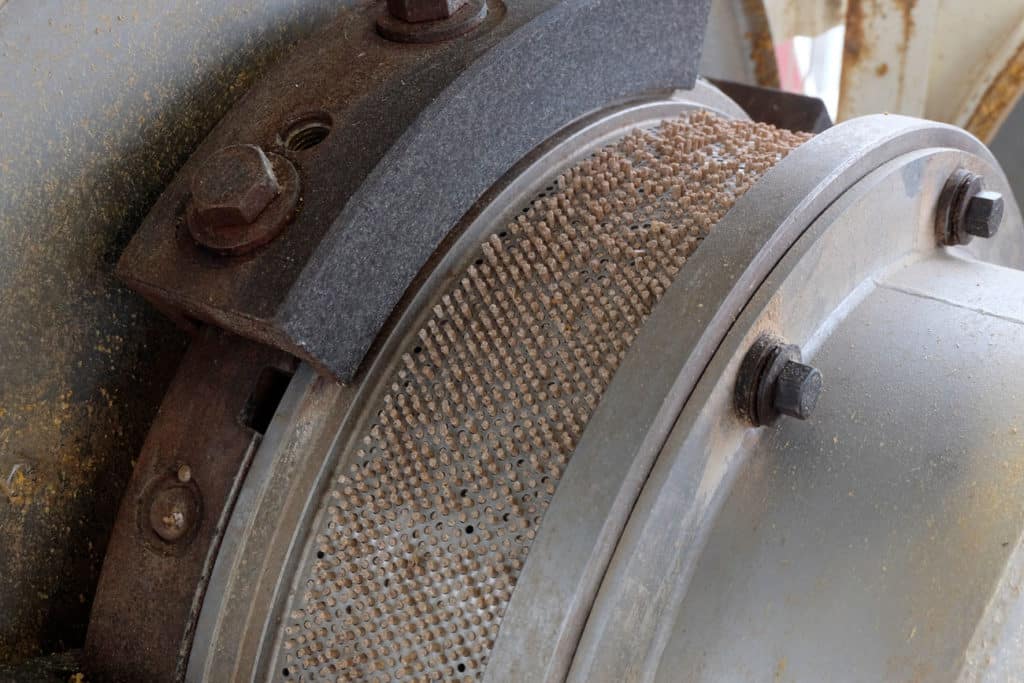 Pre- and probiotics, as live yeast, are included in animal feed to promote the growth of a healthy microbiota. Live yeast is thus improving animal health through nutrition by balancing the animal ecosystem. For this purpose, activity of the live yeast should be ensured. Inactivation of feed additives like enzymes, vitamins and yeasts is governed by many factors. When using yeast in feed production, the most prominent factors are temperature, moisture content and residence time (Mattick et al., 2001, Pitombo et al., 1994). The presence of aggressive ingredients (as choline chloride and some metal oxides) and mechanical treatments (when compacting the feed through a die) also contribute to reducing the viability of live yeast. To prevent reduction of viability, different strategies to increase the resistance of yeast during feed processing have been developed (Aguirre-Guzmán et al., 2002). For instance, heat resistant yeast is developed by adapting the drying process of the live yeast making the yeast less sensitive to heat stress. While testing the different types of engineered yeast, it is possible to further identify the critical parameters influencing the loss of yeast during pelleting.

Which processing parameters play a role in yeast stability?

In order to be able to predict loss of yeast during processing, models of yeast stability have been established by yeast manufacturers. For example, a patent issued to Lesaffre (Hiolle et al., 2010) gives an equation describing the loss of activity of Actisaf® yeast during pelleting as a function of various feed processing variables, including effects of temperature and moisture parameters.
Based on a database, communicated by ‘Phileo by Lesaffre’ and containing information related to live yeast stability, a data-mining study has been performed to target a better identification and quantification of critical parameters that influence yeast recovery. The database contains data obtained over more than 10 years of trial runs performed on a pilot pelleting line (flat die press 14-175, from Amandus Kahl). During that time, up to 50 parameters were registered for more than 650 runs. For these runs, various pelleting settings are tested, as for example the use or not of the conditioner. From the database, loss of yeast is calculated as the difference of CFU (Colony Forming Unit) measured in samples of feed mash collected in the mixer and the CFU measured in samples of feed pellets, collected after the cooling stage. For calculation simplification, CFU counts are expressed in log of CFU counts per gram of feed (on a wet basis). The calculation for the loss of yeast is summarized in Equation 1:

To study the impact of the processing parameters on the viability of yeast during pelleting, it is important to be able to discriminate what can be the importance of each registered or calculated parameter on the loss of yeast. With this purpose, the original database is first reduced, excluding parameters missing too much information. Some parameters are summarized and gathered into a new parameter, facilitating comparisons between runs. For example, information on compression of the feed at the die of the pellet press is summarized into a compression ratio. This is calculated by dividing the length of the die by its diameter. The higher the ratio, the higher the compression. Similarly, because of previous research made at Zetadec, it is known that Specific Thermal Energy and Specific Mechanical Energy (called STE and SME, respectively) used in feed manufacturing may be related with parameters influencing the stability of feed additives.

Based on the data available in the database, these values are calculated as described by Guerin and Thomas, 2013. Those new summary variables allow a reduction of the amount of parameters to be considered.

Using the resulting dataset, data mining analysis consists of running the random forest tool to assess the relative importance of each variable. Random forest is a technique which consists of forming a large set of tree-based models. In these tree-based models, regression tests are performed on randomly selected explanatory variables to hierarchize their relevance for a given response variable (Torgo, 2010). In this study, when considering the calculated variable of loss of yeast, 500 decision trees are calculated. These calculations are based on a training set of 70% of the dataset, selected randomly. From there, the last part of the dataset is used to determine the variable importance of each feed processing parameter by measuring the percentage increase in the Mean Squared Error (MSE) of the forest if we remove each variable in turn (Torgo, 2010).

The results on the order of variable importance after running the random forest are indicated in Table 1. 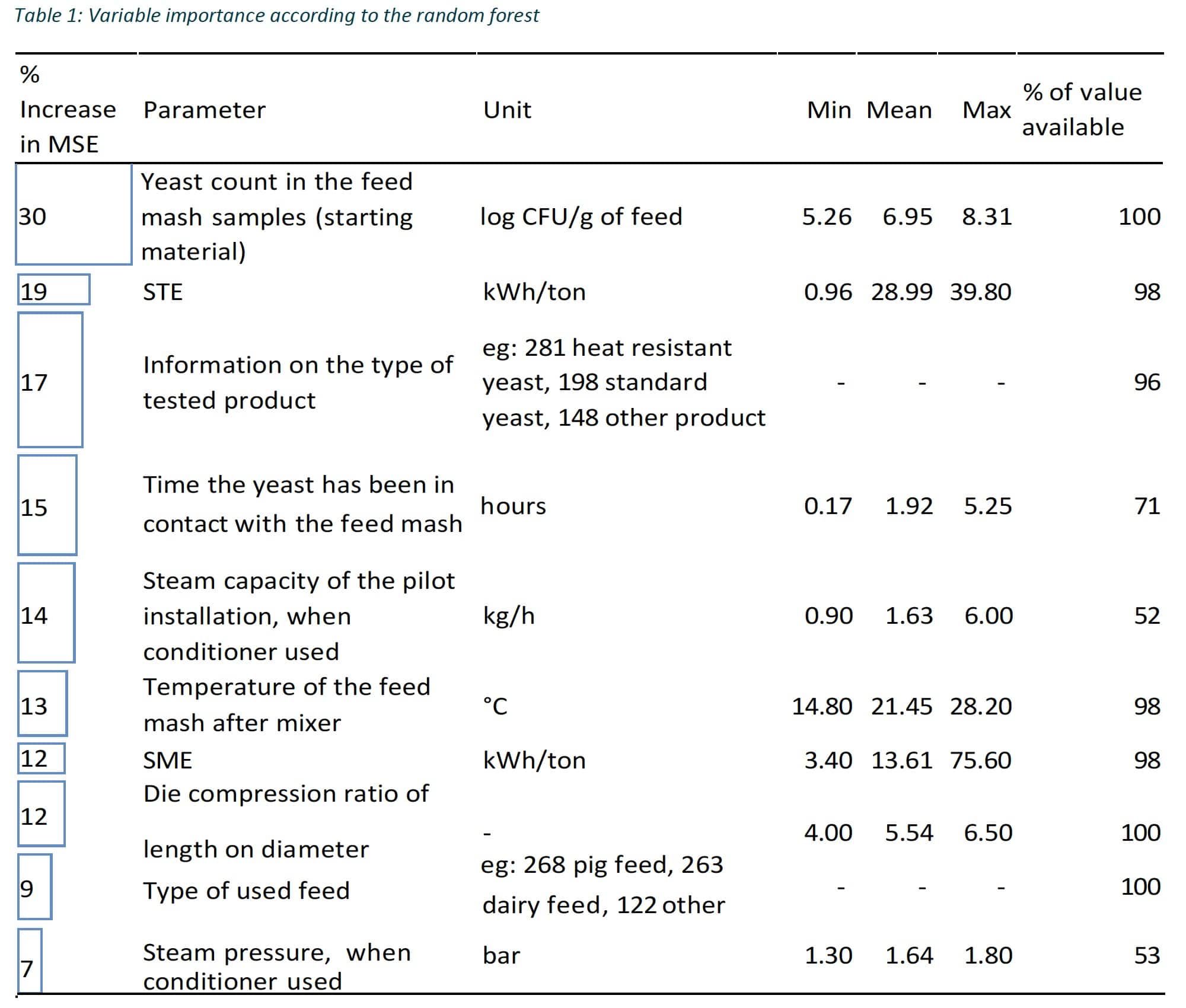 Given the information obtained from the random forest, it follows that different types of parameters influence to a higher or a lower extent yeast viability. As expected, the amount of yeast present in the feed mash has a large influence on the loss of yeast. Other expected parameters mentioned earlier also have an impact on yeast viability. These critical parameters are either related to:

Influence of processing parameters per type of yeast

In order to check for possible interactions of the critical parameters, further modeling analyses are performed for the most tested material type: standard yeast and heat resistant yeast. For each type of yeast, using the numerical variables as indicated by the random forest, a regression model is built to evaluate the effect of the different parameters on loss of yeast. For validation purposes, the same modeling procedure is applied to a randomly selected part of the data set (80%), called the training set. The resulting model is used to predict the last part of the dataset (20%), called the test set. The predicted values are compared with the measured values from the test set to get an idea on the quality of the model.

As a result, models were fitted to predict the loss of yeast occurring during the pelleting process for the two different types of tested yeast. The resulting testing models, based on selecting a random part of the dataset, were validated with a relatively good fit of the predicted versus measured data (with a correlation coefficient of 0.6 for the model of the standard yeast and 0.8 for the model of the heat resistant yeast). For both types of yeast, the contact time of yeast with the feed mash has an important effect on the yeast stability: longer contact time increases the loss of standard yeast and in most cases, the loss of heat resistant yeast as well.

This effect can be explained by the specific properties of the feed mash (as presence of aggressive ingredients, high moisture content). When compared to the heat resistant yeast, the standard yeast is expected to be more heat sensitive. This is confirmed by the fact that loss of standard yeast increases with high temperature of the feed mash at the mixing stage or higher calculated STE value, due to high addition of heat during the process. For example, with a feed mash temperature of 10°C higher than usual, a loss of standard yeast of about 0.85 log CFU/g of feed is predicted. For the heat resistant type of yeast, loss of yeast is influenced by interaction effects of parameters as compression ratios and steam pressure with contact time.

To conclude, results of this study as presented here are performed with data obtained in a pilot plant, which might differ from full-scale trial. Nevertheless, the observations made from this study give an indication of potential critical parameters where attention can be given when considering live yeast stability.
From this study, it appears clearly that strong processing conditions for parameters such as the contact time of yeast with the feed mash, the amount of yeast in the mixer, the temperature of the feed in the mixer, the amount of energy used (STE and SME) will have, in most of the cases, a negative effect on the stability of yeast during processing. In case of heat resistant yeast, other variables such as compression and steam pressure can also affect the stability of the live yeast.