Posted at 16:13h in Actisaf, Dairy by olivier@ovm-communication.fr 0 Comments
22 Likes

Over the past years attention for management of the transition period has grown as it determines the quality of next lactation. The second part of the dry period (‘Close up’) is all about preparing the cow for the event of calving and launch into the new lactation cycle. To achieve this, preparation of the rumen and prevention of metabolic disorders and post-partum diseases are key (figure 1).

The transition period: an interplay of rumen balance and immunity

Days around calving the innate immune system of dairy cows is suppressed, leading to sub-clinical inflammation. Although this is a natural mechanism around calving (calving itself is an inflammatory response) it is essential to reduce this response as quickly as possible after calving. Systemic inflammation is extremely energy consuming, as an activated immune system uses over 1 kilogram glucose every 12 hours (Kvidera et al., 2017). A quick calculation learns this resembles approximately the quantity required for production of 12 kilogram milk, so an activated immune system directly impacts production, health and fertility of the fresh cow (12kg milk * 4.4% lactose = 528g lactose = 1.056g glucose).
As mentioned before the goal of the weeks before calving is to prepare the cow. This implies, among others, adaptation of the rumen to a diet rich in sugars and starch compared to the diet she received during the first part of the dry period (fibre based). Rumen papillae length will adapt according to diet, so in transition from a fibre-rich diet to a starch-rich diet papillae length will increase and thereby enlarge their surface capacity for absorption of volatile fatty acids. Optimisation of volatile fatty acid absorption is essential as these are one of the most important sources for energy. The abundance of different rumen bacteria adapts itself to diet type as well. However extra promotion of lactic acid utilising bacteria is desired in order to prevent lactate accumulation (acidosis!) during the fresh period. Support of fibre digesting bacteria will help to extract as much nutrients from (fibrous parts of) the diet as possible, to optimize nutrient supply and reduce the negative energy balance. However these processes take up to three or four weeks, so sufficient time should be allowed for the rumen to prepare.
Although a good quality basal diet will always be the basis to meet animal needs, the use of feed additives as additional support or security has become an accepted practise over the past years. Among the wide range of additives the use of yeast products is well established as yeast preparations can be used for different purposes. Live yeast is well known for its effect to restore the rumen microbial balance and to maintain it as well, even under challenging conditions like dietary changes or (heat) stress. Yeast probiotic Actisaf® Sc47 (produced by Phileo by Lesaffre) is the reference live yeast with most registrations within the European Union and a long history on the market. Although a living yeast cell cannot be seen with the naked eye Actisaf® Sc47 has an incredible strength to adapt the rumen into a more reducing environment which benefits the fibre digesting bacteria and lactic acid utilising bacteria (anaerobic bacteria) and gives a disadvantage to the lactic acid producing bacteria (aerobic bacteria). This mode of action will improve fibre digestibility and prevent the risk for acidosis, which is well described in literature (Marden et al., 2008). These aspects are also the more traditional reasons for feed suppliers or farmers to start using Actisaf® Sc47, whereas new research from Phileo by Lesaffre revealed other benefits from Actisaf® as well.

A healthy start into lactation: focus on feed intake, ketosis prevention and performance

A study by Minuti et al., 2018 measured the effect of supplementation with Actisaf® Sc47 at 10 gram/cow/day from three weeks pre-partum until three weeks post-partum in comparison to a control group. Results showed a significant decrease (p <0.05) in haptoglobin blood levels on day one and three post-partum in the Actisaf® group, suggesting these cows suffered less from systemic inflammation (figure 2). 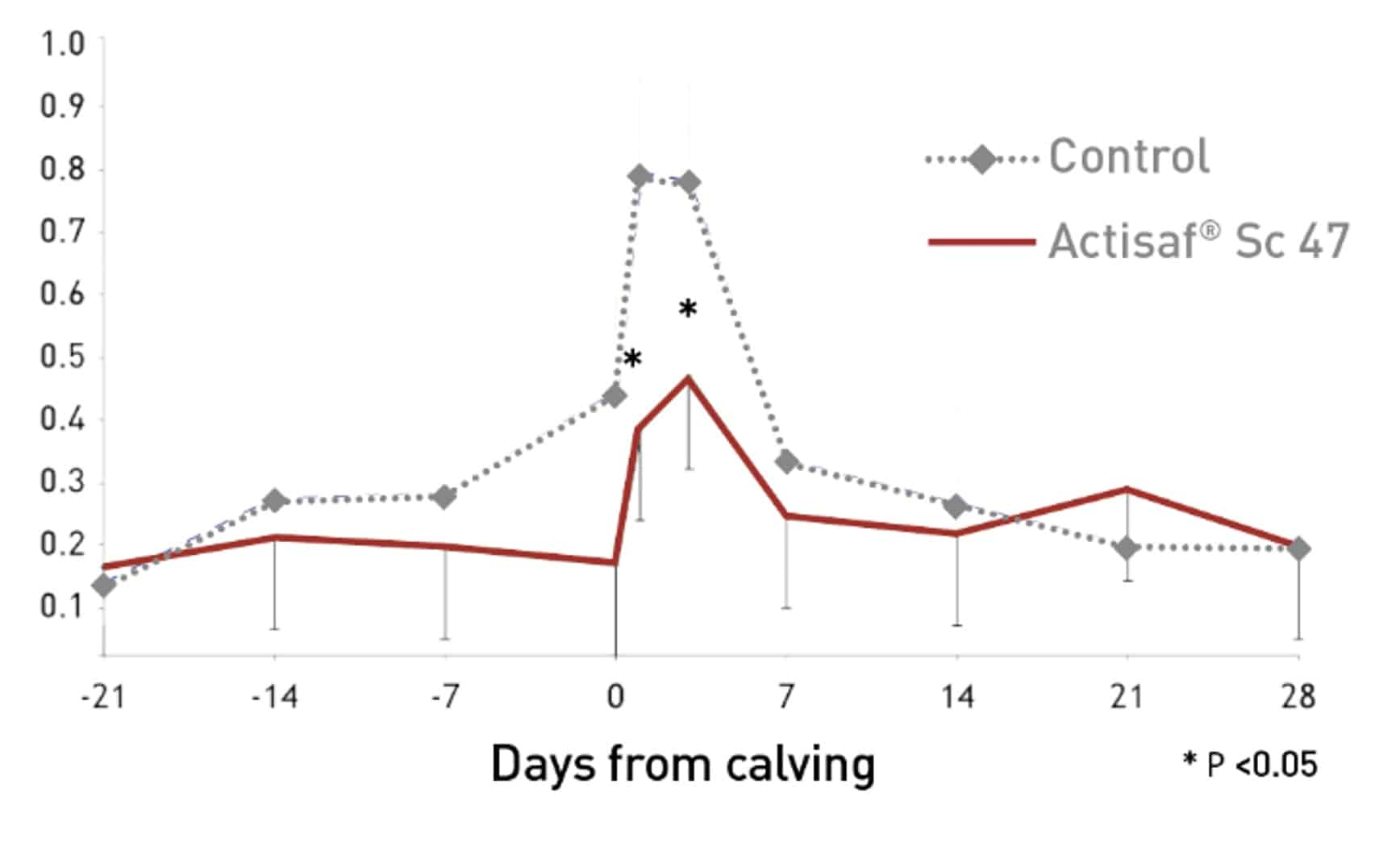 Also concentration of β-hydroxybutyrate was significantly lower in the treatment group versus control group on day 28 of the study (0.57 mmol/l vs. 1.24 mmol/l). β-hydroxybutyrate values above 1.20 mmol/l are generally regarded as an indicator of (subclinical) ketosis; a metabolic state that should be prevented as it compromises a good start of lactation. In addition the study analysed an increased feed intake in the cows supplemented with Actisaf® Sc47, being 1 kg/d higher compared to the control group. As a consequence of increased feed intake and a lower energy consumption by the immune system, milk production was calculated to be 2.0 kg/d higher in the Actisaf® group.

Such sound effects from Actisaf® Sc47 in transition cows have been detected in the field, on commercial dairy farms as well. A field study from 2016 examined the effect from daily supplementation with 10 gram Actisaf® Sc47 three weeks pre-partum and 20 gram Actisaf® until three weeks post-partum, compared to a control group (Julien et al., 2016). Although Actisaf® supplementation was stopped three weeks after calving, average milk production was numerically higher in the treatment group up to three months after calving (data collection was stopped at this point). Although (individual) feed intake was not measured, it can be assumed cows receiving Actisaf® Sc47 had a superior feed intake over the control group as rumen filling score (2.81 vs. 2.10) and body condition score (2.94 vs. 2.42) were significantly higher (p <0.01) on day eight after calving (figure 3).

22 days post-calving β-hydroxybutyrate concentrations were measured in both groups, showing a significant difference (p < 0.024). The average concentration in the treatment group was 0.79 mmol/l vs. 1.41 mmol/l in control group, suggesting the latter was in high risk for ketosis (figure 4). A last interesting finding from this study was the success rate of the first artificial insemination (AI), 120 days after calving. About 27.8% of the control group was pregnant after this first AI whereas success rate of cows supplemented with Actisaf® was almost doubled, up to a level of 50%. As a dairy cow will only accept a new pregnancy when her health status, body condition and milk performance are sufficient, these trial results suggest Actisaf® can be of support to meet these requirements. 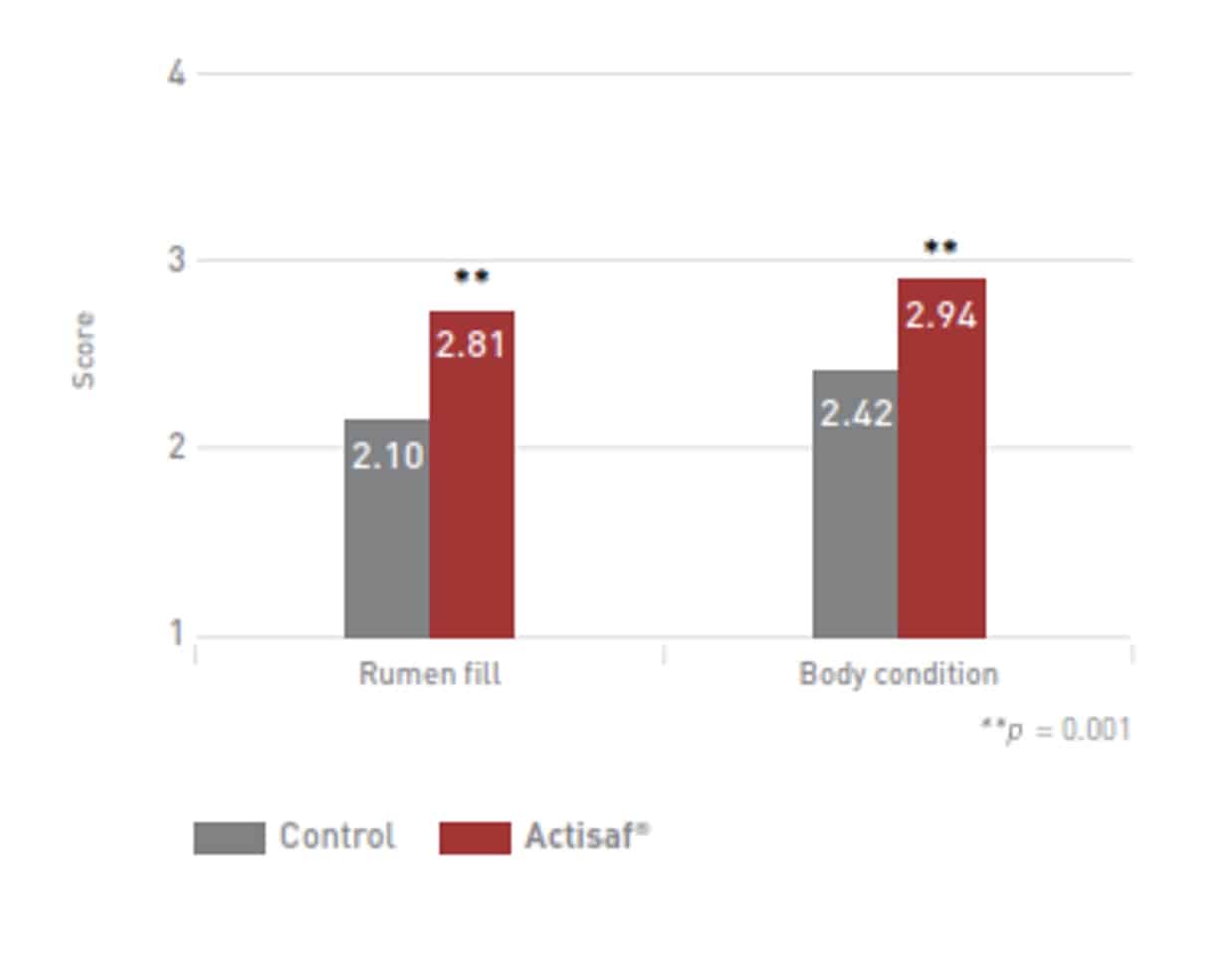 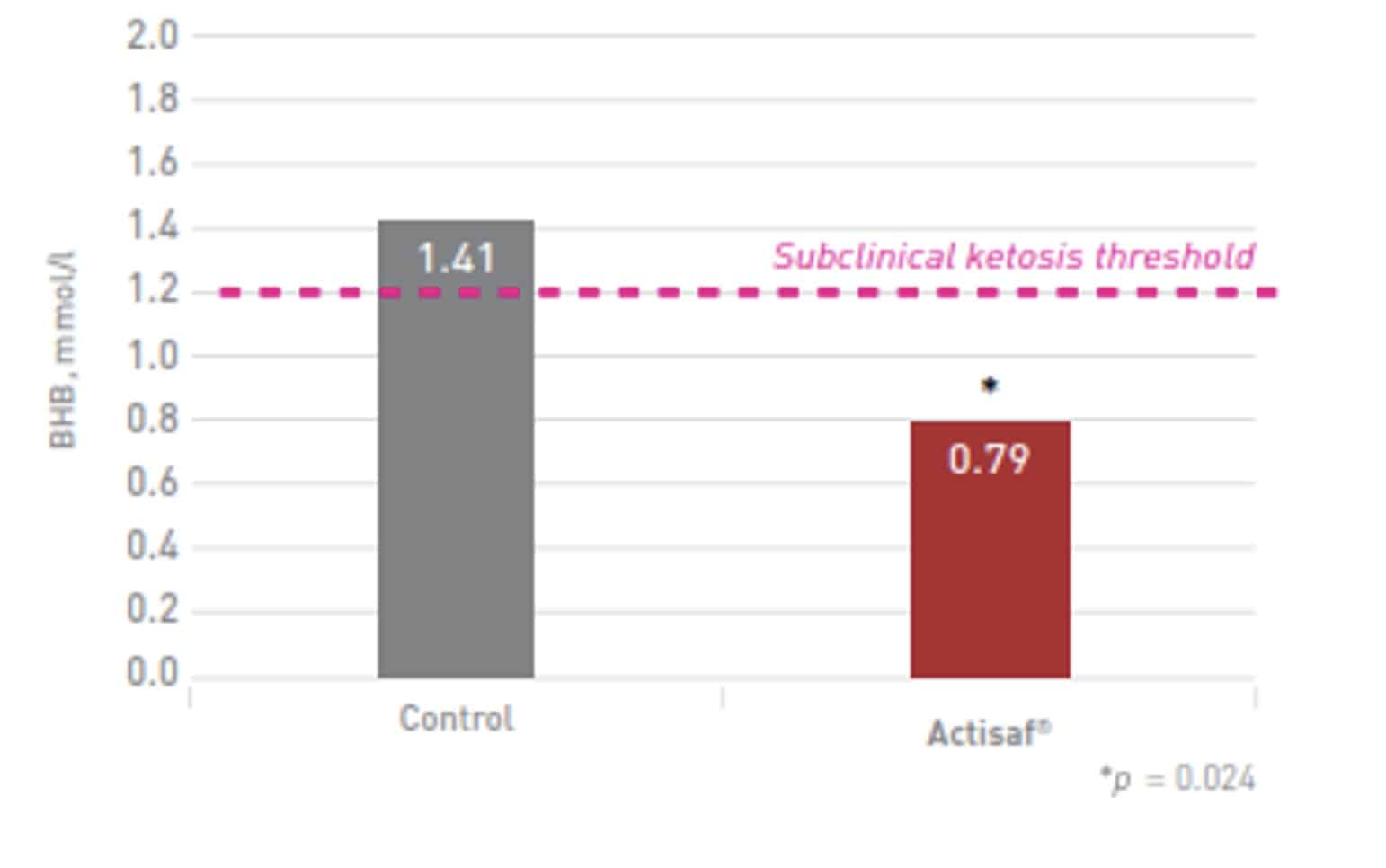 To further study the effect of Actisaf® Sc47 on reproduction, Phileo by Lesaffre conducted a trial which involved 14 dairy farms in France (Julien et al., 2018). The trial took three years, where year one and two were considered as control period (no supplementation with Actisaf®) and last, third year, as the treatment period (supplementation with Actisaf® at 5 gram/cow/day for all cows). For data analysis results on production and reproduction during the treatment period were compared to those recorded during the control period. The dataset included figures of almost 2.500 dairy cows, who received over 4.000 inseminations throughout the complete trial period.

Data from multiparous cows showed the number of successful first inseminations increased to 36% during the supplemented period, meaning an increase of 5% compared to the control period. In addition the required number of inseminations per cow resulting in pregnancy reduced significantly from 3.1 to 2.7 (p <0.01). Consequently a reduction in number of days (-5) from calving to pregnancy was observed: 148.8 during control period vs. 143.9 during Actisaf® period. These improved results on reproduction are accompanied by increased productive performance as well, as milk production of multiparous cows was on average 1.5 kg/day higher during the supplemented period compared to control period (34.3 vs. 32.8 kg/day). These increased milk yields did not lead to a dilution of the milk, as fat concentration (37.6 vs. 37.1 g/kg milk) and protein concentration (31.4 vs. 31.3 g/kg milk) tended to be higher in the Actisaf® period (p<0.073).

Overall the total number of artificial inseminations required during the supplemented period was reduced by 560. Considering the cost of €43 for each insemination, over €24.000 was saved on this aspect. Moreover milk performance of all involved farms together was increased by +765.000 kg milk and 58.000 kg fat and protein. Taking these figures into account the study reports a return of investment of 1:6 for supplementation with Actisaf® Sc47.

Benefits of durable performance go beyond cow and farmer

Both a well-managed transition period,  improved cow fertility and reproduction will lead to a healthier herd with more lactation cycles. These aspects fit in the global increasing importance of sustainability, where herd durability is an important goal to achieve. Another aspect raising a lot of attention is the emission of greenhouse gases, especially from ruminants. Methane is an important gas in the discussion around global warming as its contribution is 28 times higher than that of carbon dioxide (Grossi et al., 2018). With methane originating from enteric fermentation and manure storage it is key to restore balance of the rumen microflora, thereby improving feed efficacy to control the emission of this particular gas. As Actisaf® creates a more reducing environment in the rumen the density of fibre digesting bacteria and consequently the digestibility of NDF and ADF fractions are increased. This aspect is recognised in the field by means of dung sieving and laboratory analysis. Improved fibre digestion results in more energy available for the animal, thereby benefitting production, health and performance. And, according to expectation an increased feed efficiency will lead to a reduced methane intensity per unit produced milk.

A study performed in 2020 at the Centre for Dairy Science Innovation of Nottingham University included a treatment group with dairy cows receiving 10 gram Actisaf® Sc47/day whereas the control group received the basal diet only. The trial lasted for 120 days. Dry matter digestibility was improved in the Actisaf® group by 3%, leading to a significant increased production of energy-corrected milk by 5.5% (50.5 kg/d vs. 47.7 kg/d). Due to improved feed efficiency the intensity of methane emission was reduced as well: per kilogram energy-corrected milk it dropped from 9.8 gram in the control group to 9.1 gram in the group supplemented with Actisaf® Sc47; a reduction of 6.5% (figure 5).

Downregulation of excessive inflammatory responses and high feed efficiency go hand in hand to support the fresh cow during the transition period, as this will benefit animal health and therefore milk performance and reproduction.

The probiotic function of Actisaf® has proven to support the prevention of metabolic disorders at start of lactation. In combination with its power to create a more reducing rumen environment, benefitting anaerobic bacteria, more energy can be directed to milk performance and reproduction. Next to improved fibre digestibility the enhanced feed efficiency has shown to reduce the intensity of methane emission as well, validating supplementation with Actisaf® Sc47 throughout the complete lactation cycle.