Posted at 08:17h in Rabbits by olivier@ovm-communication.fr 0 Comments
22 Likes 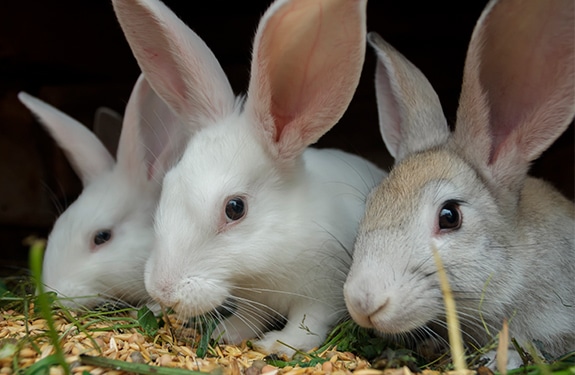 The increasing development of farmed rabbit production is being driven by the excellent nutritious quality of rabbit meat. Rabbits are well known as a quick-breeding source of low-fat, high-protein meat with the added appeal that their prolificacy, compared to other animals, is a rapid means of converting protein intake into meat.

Already important as a valuable meat source, rabbit farming is forecast to continue its growth in response to the rising food needs of the world’s expanding population.

While China is currently considered to be the leading producer of rabbit meat (FAO 2017), the future expansion in global output will be based on improved breeding selections, technological advances including meat processing (Li et al., 2018) and increased governmental support.

Rabbit farmers have always been ready and willing to adapt to the various challenges involved in achieving effective meat production, coping with such issues as high mortality levels in kits’ and negative energy balance concerns in relation to does. Producers are also keenly aware of the need to achieve good farming results within a breeding and rearing environment, governed by minimal health expenditure and a constant awareness of the need to reduce the sector’s impact on antimicrobial resistance.

Intensive breeding processes, poor feeding regimes and degraded sanitary conditions are all sources of stress in rabbit farming which can cause dysbacteriosis and immunodeficiency. As a result, the natural resistance of farmed rabbits can be damaged, leading to an inevitable rise in the incidence of disease within production units. Potential knock-on impacts include impaired digestion and metabolism and the appearance of intestinal infections, leading in turn to reduced productivity and increased levels of mortality.

Addressing the need for antibiotic reduction in farming is obviously a global concern which embraces all food animal species. Rabbit farming’s central place in the current debate, meanwhile, reflects the species’ position as one of the world’s most medicated livestock sectors. For example, a recent farm-based study carried out in China, focusing on diarrheic rabbits, revealed that 78.2% of the E. coli isolates found in the study population, were resistant against tetracycline. The same study placed resistance against ampicillin at 65.5% (Zhao et al., 2018). In another study, carried out in Spain from rabbit farms, revealed that E. coli isolates were resistant to doxycycline (89.3%), to amoxicillin (16.1%), gentamicin (2.9%), and enrofloxacin (4.2%) (Medina and Orden, 2015).

Both these results, viewed against the background of the world’s need to maintain the effectiveness of antimicrobials in human treatments, highlights the urgent requirement for rabbit farmers to continue reducing their use of antibiotics.

Many countries, of course, have already banned the farming use of antibiotics, including growth promotors, forcing animal nutritionists to seek alternative solutions to protect the health and productively of all food animal species. Such solutions include the use of probiotics, a health-boost option which has been extensively tested in recent years.

A key study, carried out in Europe, assessed the impact of giving does and weanling rabbits a probiotic yeast Actisaf® Sc 47 as a dietary supplement. Fed at 0.15% level of inclusion (7.5 10⁹ CFU/kg of complete feed), the supplement was evaluated according to how much it helped boost the trial animals’ zootechnical performance (Maertens and De Groote, 1992).

Judged on pre-weaning performance, the probiotic yeast Actisaf® Sc 47 secured a 37-gram boost to the weight of kits in comparison to the control. Litter size was also higher by 0.05 per litter for the Actisaf® Sc 47 group than the control group. These results were recorded at weaning when kits were four weeks old. 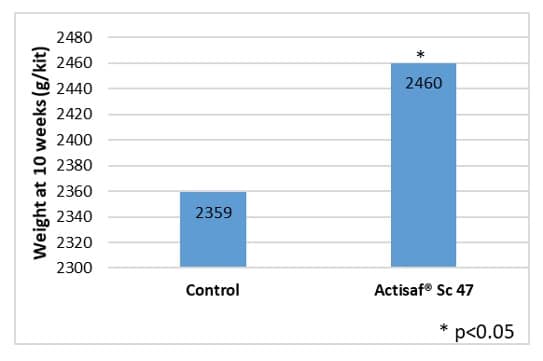 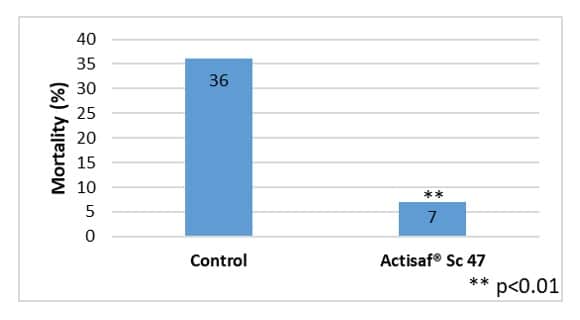 Mortality levels (Figure 2) for the Actisaf® Sc 47 weanlings (4/93), meanwhile, were significantly lower than in the control group (19/93), helping to secure a minimum return on investment of 2:1. This was due to the Actisaf® Sc 47 group being calculated as producing one kit per litter per year more than the control, alongside cost savings due to less being spent by farmers to boost the nutrition of does.

The conclusion reached was that yeast supplementation had the most beneficial effect in relation to reducing mortalities in the Actisaf® Sc 47 group. The trial results also confirmed that the inclusion of Actisaf® Sc 47 as a dietary supplement increased the health of does and weanlings without the need for farmers to use antibiotics.