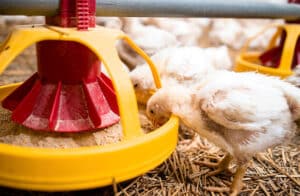 Advanced nutritional feed strategies will play an ever-increasing role in enabling poultry producers to transition away from widespread antibiotic use. Phileo’s comprehensive post-antibiotic program provides the nutritional tools in the form of Safmannan® and Selsaf® to both combat the negative effects of variable quality feed and the stress associated with the starter to grower feed transition, as well as supporting the bird’s own immune system by promoting antioxidant health.

Numbers of countries and areas, like China, EU, Vietnam, US and Brazil, among others, are having legislation banning the use of antibiotics as growth enhancers. This has precipitated the development of post-antibiotic strategies which maintain bird growth and health to effectively manage this transition. A robust nutritional strategy plays a key role in effective poultry management while effectively reducing antibiotic use.

A focus on nutrition and feed quality

Recent developments in poultry genetics have resulted in impressive increases in broiler finishing weights, due to both improved growth rate potential and an augmented feed intake capacity. However, these production benefits have produced birds that are more sensitive to digestive disorders, and which can be heavily influenced by various stressors such as infection, temperature changes, water purity, and crucially, feed quality.

The calibre and type of raw feed material has a significant impact on poultry gut health. Certain grains can be difficult to digest or can produce intestinal inflammation, reducing the bird’s ability to assimilate nutrients. Other feed types can be overly rich in protein which can promote the growth of opportunistic pathogens such as Clostridium perfringens, or comprise too many non-starch polysaccharides which can also increase pathogenic bacteria at the expense of beneficial species[1]. The nature of the feed, whether it be pellets or a mash, can also impact both the gut health and thus feed intake. Nutritionists now routinely endorse the preferential use of crumbled pellets to maintain the gut health of young birds. Finally, corn and soya bean meal prices have generally been on the increase, motivating poultry producers to utilise alternative and potentially nutritionally poorer diets.

Safmannan® is a premium-quality yeast postbiotic characterised by consistent high mannan and beta-glucan levels. Mannanoligosaccharides can inhibit pathogenic bacteria that contain type-1 fimbriae with mannose-seeking lectins (Escherichia coli and Salmonella spp.) from adhering to and colonizing the intestine. This postbiotic from Saccharomyces cerevisiae can also lead to favourable effects on the intestinal mucosa itself (increasing villi height and goblet cell density) and an improvement in animal productivity. Safmannan® improves poultry health and yield by optimising intestinal microbiota, limiting pathogen pressure, supporting gut function, and boosting natural defences. Multiple real-world trials have demonstrated that Safmannan® is able to improve poultry growth and feed conversion rates (FCR) to the same, even greater extent as antibiotic growth promoters (AGP) under a variety of conditions such as heat stress or challenge with Clostridium perfringens.

The transition from starter feed to grower feed engenders a period of stress in young birds. In a recent factorial design study conducted by Fowler et al., the authors aimed to assess whether supplementation with a yeast postbiotic affected broiler growth parameters when fed a standardised corn-soya or a variable diet (Figure 1) during this early feed period. The variable diet resulted in a less-efficient feed conversion rate than the corn-soy diet at 3 weeks (Figure 2). The addition of Safmannan® at 250 g/t to both diets resulted in significant improvements in FCR, indicating more cost-effective growth (p<0.01). The Safmannan® supplementation effect was more striking when birds were fed a variable diet, where FCR approached that of a stable control corn-soya diet. Safmannan® supplementation boosted weight gain by 5.2% in the corn-soya group at 3 weeks (p<0.01), and increased weight gain by an impressive 13.7% in the variable diet group (p<0.01), demonstrating that postbiotic supplementation can mitigate the early negative effects of a variable diet.

After 5 weeks on the corn-soya or variable diet, the birds supplemented with Safmannan® demonstrated significantly superior growth (p<0.05, Figure 3). At this stage, corn-soya diet with yeast postbiotic resulted in superior weight gain. Postbiotic supplementation also tended to reduce bird mortality at 5 weeks (Figure 4). Thus Safmannan® can compensate for deficiencies in feed quality and reduce the harmful effects of a nutritional challenge.

One of the key ingredients in complete poultry diets are oligo-elements, such as selenium (Se). These essential nutritional components are critical in reducing oxidative stress which is defined as the imbalance between reactive oxygen and nitrogen species (RONS) of the pro-oxidant system and the antioxidant defences, which might interfere with animal health and end-product quality. The most well-known seleno-enzyme is glutathione peroxidase (GPx), which catalyses the conversion of RONS such as hydrogen peroxide and organic hydroperoxides to water and alcohols and thus plays a key role in antioxidant defences. To ensure adequate levels of seleno-enzyme, the element is either added as inorganic forms (mineral salt such as sodium selenite [SS]) or in organic forms such as synthetic selenomethionine (SeMet) or selenised yeasts rich in natural selenium.

Selsaf®, a natural source of organic selenium, is another key element of Post-antibiotic program . Its standardised production methods ensure that Selsaf® contains active selenocomponents (including selenocysteine and selenomethionine) which are more easily absorbed in poultry intestines than inorganic selenium products. Additionally, Selsaf® contains a source of active directly available seleno-compounds which can be used for the direct formation of SeCys. Seleno-cysteine is essential for Glutathion peroxidase activity, a major anti-oxydant selono-enzyme involved in the protection of the body cells against free radicals. Seleno-methionine is directly incorporated as a substitute of methionine during the synthesis of the protein to build up a reservoir/storage of Selenium, that can be released during episods of stress.

The high bioavailability of selenium components from Selsaf® and their incorporation into animal proteins was demonstrated in broilers by measuring selenium concentrations in blood, muscle, or eggs of birds that had been supplemented with sodium selenite, other selenium-yeast product, or Selsaf® compared to control. This trial indicated that Selsaf® selenium components increased GPx activity in poultry, thereby enhancing the antioxidant defence of these birds. In another trial comparing two synthetic selenomethionines and Selsaf® to control in Ross 308 broilers demonstrated that by day 42, birds supplemented with Selsaf® were significantly 2.4% heavier than the best synthetic seleno-amino acid, and 5% heavier than controls (Figure 5).

Additionally, trials confirm the non-specific incorporation of Selsaf® derived SeMet into proteins, resulting in a reserve pool of Se in the muscle (figure 6), which can be addressed during stressful times to improve the antioxidant defense. The integration of SeMet in eggs and meat, indicates that Selsaf® gives rise to functional foods which can function as a source of organic Se for both humans and offspring.

Adding Selsaf® to animal feed has been shown to improve their overall health status by stimulating antioxidant defences. Not only are immune and reproductive functions improved, but also animal performance and animal product quality (eg. less drip loss, more tenderness and juiciness of the meat) .

These trials demonstrate the vital importance of a robust nutritional strategy that can support birds throughout all production stages, whilst also contributing to antibiotic reduction. Phileo’s post-antibiotic program with enhanced nutrition via Safmannan® and Selsaf® is a straightforward and cost-effective strategy to help poultry producers transition from antibiotics. 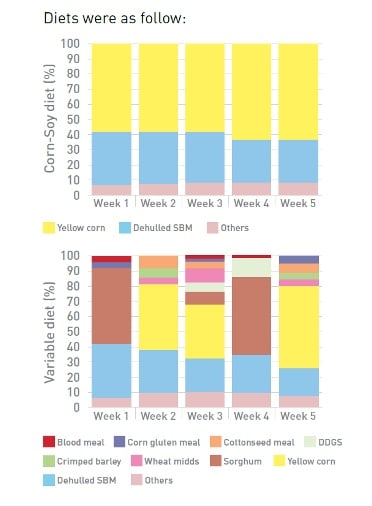 Figure 1 – In the trial, Ross 308 broilers were fed either a corn-soy diet or a variable diet for five weeks, supplemented or not with Safmannan® yeast postbiotic. 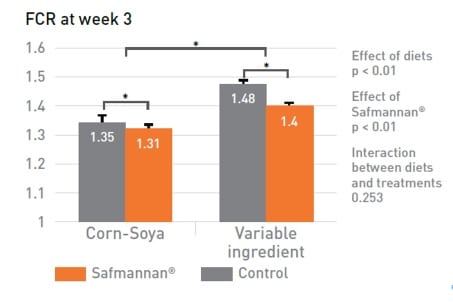 Figure 2 – The positive effect of Safmannan® supplementation on feed conversion rates (FCR) in Ross 308 broilers fed either a corn-soya or a variable diet. 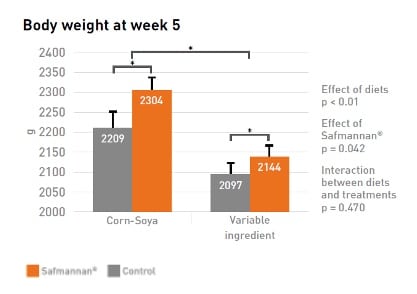 Figure 3 – Body weight was significantly increased after 5 weeks of corn-soya or variable diet supplemented with Safmannan®. 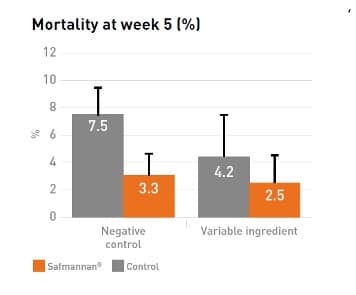 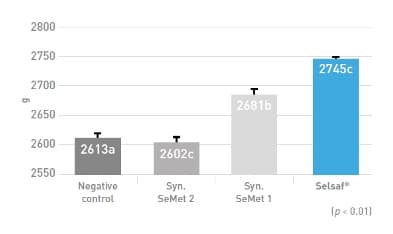 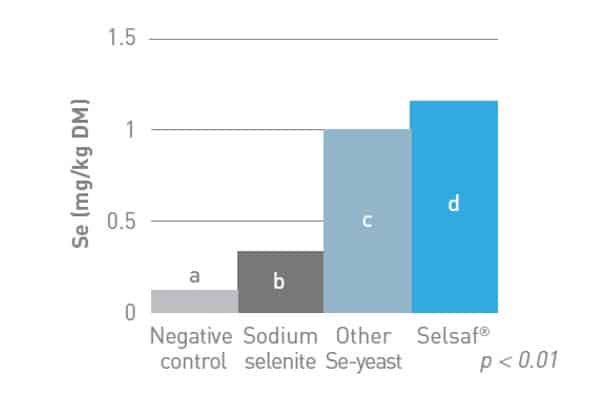