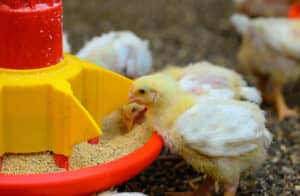 “Free from hunger and thirst” is the first of the five freedoms of animal welfare. Poultry producers are making enormous efforts to give their birds the best possible diet. However, the price of cereals keeps rising worldwide. Feed efficiency and gut health are playing an unprecedented key role in today’s poultry nutrition.

Antibiotic growth promoters (AGPs) used to be efficient tools in poultry nutrition to maintain gut health and reach an adequate feed conversion ratio (FCR). The global reduction of antibiotics provides an opportunity for poultry producers to choose more sustainable and healthier solutions for their birds, as well as for consumers. Within this new generation of nutritional tools, yeast postbiotics have constantly demonstrated their excellent effects on gut morphology and feed efficiency.

According to the International Scientific Association of Probiotics and Prebiotics (ISAPP), a postbiotic is a “preparation of inanimate microorganisms and/or their components that confers a health benefit on the host.” The reference yeast postbiotic, Safmannan (hereafter called ‘the reference postbiotic’), developed by Phileo by Lesaffre is a particularly good example of a postbiotic, according to the ISAPP’s definition.

During a 43-day comparative trial, Morales et al. found that broilers supplemented with the reference postbiotic have significantly improved villus morphology and consequently, better growth than those in the control group. During this experiment, at D23, 3 chickens from each pen were humanely euthanized, then ileal digesta samples were taken to determine intestinal mucosa morphology. Compared to the control group, birds in the reference postbiotic group had significant increased villus height (P<0.0001), mucus thickness (P<0.0001) and number of goblet cells (P<0.0001), see Table 1.

The mucus gel layer is a physical barrier of the intestine that plays a key role in protection, lubrification mucosa-associated digestion, and transport between luminal content and the epithelial lining. The increased villus height induced by the reference postbiotic results in a larger nutrient absorption surface area and leads to a significantly better final body weight (P<0.05), with respect to the control diet (Table 1).

Gut is the primary organ to digest and uptake nutrients. Villus height, goblet cell number and mucus thickness are the key elements to “take care of” in a successful nutritional strategy. Indeed, intestine length and increased villus height will make the surface area more available for nutrient absorption. The reference postbiotic, Safmannan, has been proven to have a positive impact on gut morphology, thus helps birds to reach a better gut health status and improved growth performance. Adding the reference postbiotic in a holistic nutritional strategy will empower poultry producers to obtain optimum use of feed and great productivity. 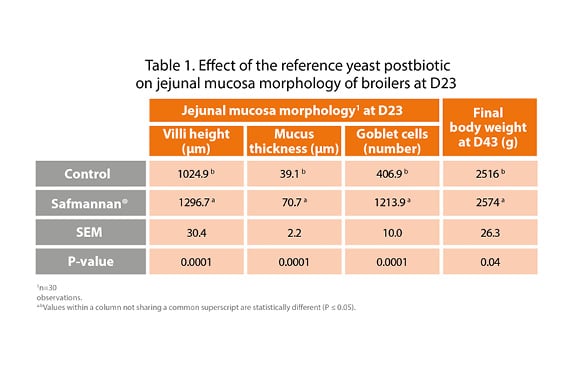 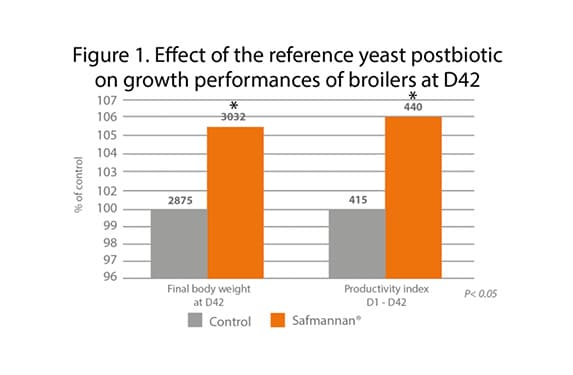