Posted at 15:04h in Uncategorized by Julie BRIERE 0 Comments
22 Likes

Nowadays, due to their favorable nutrient profile, potential health benefits, and low environmental impact, yellow mealworm (Tenebrio molitor – YMW) is one of the most reared insect species. They have a great potential to serve as a sustainable source of protein for human consumption and for several animal species. With targeted industrial production levels on the rise, improving YMW breeding practices and hence securing better zootechnical performance becomes more and more relevant. Phileo by Lesaffre is engaged to face this challenge together with the insect rearing community to contribute to food security, biodiversity, and natural resources sustainability.

YMW can exclusively be reared in wheat bran, the addition of yeast probiotics helps to improve its growth performance and total larvae yield, helping farmers to maximize productivity and secure the financial proceeds of their operations.

“In recent years, it has been demonstrated that yeast probiotics can contribute to optimizing the average daily growth of several animal species. In this context, Phileo by Lesaffre is already applying a rigorous scientific approach to select and demonstrate the benefits of yeast probiotics on different insect species, including YMW, says Jesús Gonzalez, Global Insect Manager at Phileo by Lesaffre. Extensive trials undertaken at Wageningen University in the Netherlands in 2019 demonstrated that Actisaf® SC47 can contribute to boosting YMW larvae growth when the yeast probiotic is added to the feed substrate at a 0.2% w/w rate (Rabot & Richard, 2019).

“The objectives of the new study were to validate the performance of Actisaf® Sc47 inclusion in the rearing substrates under industrial production conditions, explains Dr Nadège Rchard, research Manager at Phileo by Lesaffre . Two treatments, 10 replicates each were evaluated on 5.0 kg trays of wheat bran:  (1) Actisaf® Sc47 at 0.2%  (2.2×107 CFU/g) and (2) non-treated control.

During the experiment, in Spain, three substrate additions with ≈16% humidity were done in weeks 0, 4, and 12; and two frass extractions in weeks 4 and 16. At the end of the rearing period, the total fresh larvae weight (g) and the average individual larvae weight (mg) were measured, and the total frass was collected all along with the trial.

The statistical significance was assessed by a t-test with a p-value threshold of 0.05 for the total larvae fresh weight and total frass weight traits. The individual weight was calculated by a numerical average out of weighting one thousand larvae. 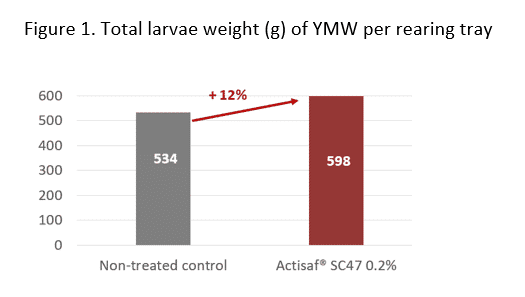 Total larvae weight increased 12%, this results in an extra protein and oil yield for the farmer.

Total frass weight increased significantly, frass consists of droppings of insects kept by insect breeders and used as a fertilizer, resulting in an extra benefit for the YMW farmer of 13%. Frass fertilizer is also considered better for the environment than conventional manure and contributes largely to more sustainable horticulture.

The study illustrates that Actisaf® Sc47 can increase the zootechnical performance of YMW when added to the feed substrate at a rate of 0.2%. Phileo by Lesaffre is confident that these results can be replicated in other commercial YMW operations and will confirm the positive results hence helping to transform the agricultural industry.

This data will be presented during the INSECTINOV4 2022.

We daily support our partners, from global industry players to family farmers, in their transition towards sustainable good practices. With them, we develop tailor-made solutions for preventive care allowing a limited and responsible use of antibiotics by mastering microbiota and immunity. Our shared ambition is to raise healthy animals while sparing planet resources and energy. Our rich collection of proprietary probiotic strains allows us to develop evidence-based solutions taking into account animal species’ diversity ranging from pets, livestock, poultry, fish to insects to overcome the increasing complexity of food production.