Posted at 23:01h in Horse by olivier@ovm-communication.fr 0 Comments
22 Likes 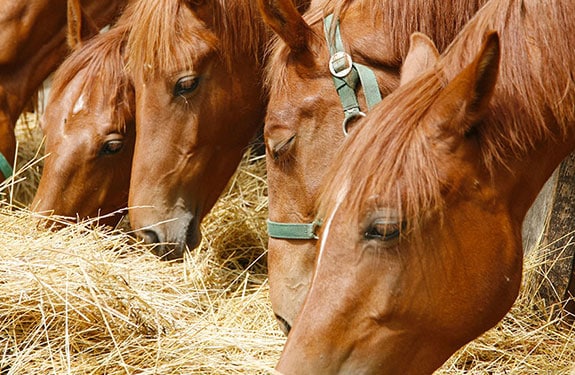 About 75% of a horse’s energy needs should be derived from roughage.

A horse’s digestive tract is well-adapted for fibre valorisation, especially through active microbial digestion in the hindgut. Both the caecum and colon contain rich microbiota, which is specific to the equine species, a large part being cellulolytic bacteria. In the hindgut, fibrolytic activity starts with the adhesion of the microbial population to particles. Enzymes are released, leading to sugar hydrolysis and the formation of gases made of volatile fatty acids («VFA’s»). Absorbed within the luminal membrane, VFA’s cover about 75% of a horse’s energy needs.

Cell wall carbohydrates apart, another source of energy is starch, provided by cereals. In horses, diet starch is digested by the antececal digestive tract. Approximately 60% is broken down in the stomach by the microbial pathway, with residual starch being digested in the small intestine, where it is then enzymatically converted into glucose and assimilated. Diet starch in excess (beyond 200g/100 kg bodyweight), passes to the large intestine, where it undergoes a second Intense microbial fermentation. Starch microbial digestion releases VAF’s and lactate, which the lactate-utilising bacteria normally present in the eco-system can also transform into VFA’s. A similar fermentative process also happens in the hindgut for non-structural carbohydrate fractions (fructans) present in the diet of grazing horses.

Excessive dietary amounts of rapidly fermentable carbohydrates, such as starch or fructans, alter the digestive ecosystem, promoting the growth of amylolytic bacteria, while glycolysis generates lactate which, in turn, favours acidophilic bacteria. This results in a drop in pH. Such acidification kills the fibrolytic bacterial population, with the resulting decrease in fibre-fermenting species leading to a reduction in fibre digestibility and in VFA absorption.
Digestive acidosis can have serious health consequences in horses, including the development of diarrhoea, colic, or laminitis. It can also cause painful gastric ulcers (EGUS), leading to behavioural disorders. 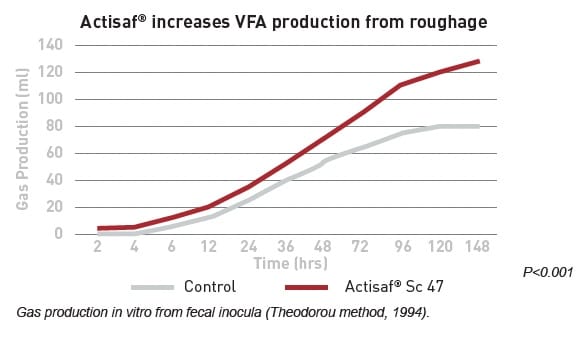 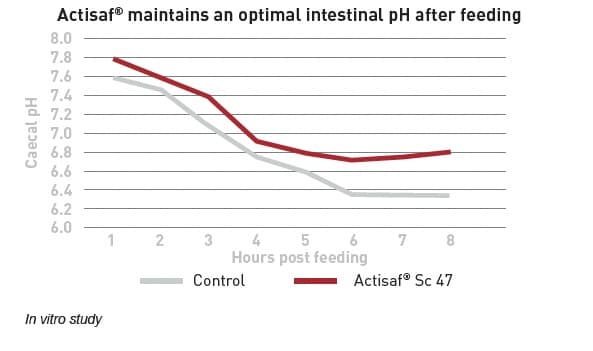 In horses, an intestinal microbiota imbalance can impair welfare. Indeed, the undesirable growth of lactic acid bacteria and subsequent digestive acidosis can have a negative impact on the health of horses. If the imbalance is rapid and excessive, as with a fructan-rich diet, bacterial multiplication comes with the release of a huge quantity of bacterial toxins. These pass through the intestinal wall, triggering a body-wide release of pro-inflammatory mediators. This can cause a laminitis seizure with inflammatory swelling tissues in the feet having no place to expand. In less critical cases, acidosis is usually limited to the digestive tract. In the stomach, for example, it causes gastric ulcers, with the resulting pain frequently leading to EGUS-linked behavioural problems.

1. Actisaf® Sc 47 helps limit laminitis
Microbial digestion is altered in horses which have recently suffered from laminitis, compared to healthy horses. An in vitro model shows that gas production profiles are significantly different between healthy and unhealthy horses, suggesting an evolution of the microbiota in favour of starch degradation, rather than fibrolytic activity. In cases of rapid fermentable carbohydrate overload in the diet, an imbalanced bacterial population releases large quantities of lactate. The resulting reduction in pH triggers dramatic bacterial lysis and endotoxemia, causing laminitis. When given to horses which are prone to laminitis, a relevant dose of Actisaf® Sc 47 is able to rebalance the digestive flora and prevent the excessive microbial fermentation of rapidly fermentable carbohydrates. As a result, foot tissue inflammation is reduced and the risk of laminitis seizure is lowered. 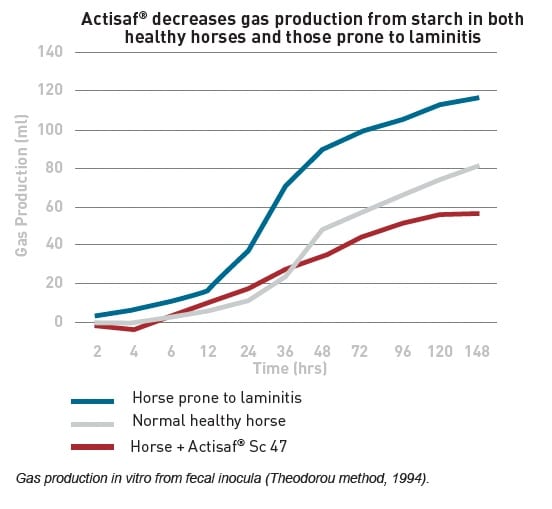 2. Actisaf® Sc 47 can decrease the incidence of aberrant behaviour; often linked to gastric ulcers.
EGUS syndrome is painful and often leads to abnormal behaviour in horses, such as vocalisation, stereotypies, kicks against the door, threatening attitudes… To reduce the risk of digestive acidosis, Actisaf® Sc 47 has been administered at a daily dosage of 10g to horses with this type of behaviour. Given daily, Actisaf® Sc 47 has a calming effect. Behavioural issues are significantly lowered, which reassures owners and horse riders and is a sign of improved horse welfare. 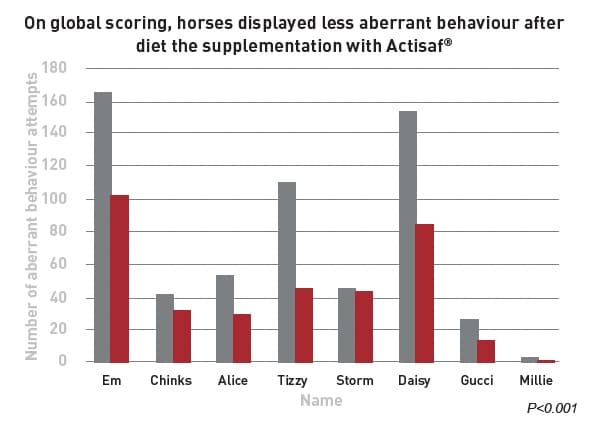 Adapted to roughage digestion, a horse’s intestinal flora is disturbed by rations which are too rich in energy-concentrated feed. Through its probiotic benefits, Actisaf® Sc 47, given at 5g or 10g per day, per horse, is able to rebalance the digestive microbiota within a few weeks. This improves feed energy yields and lowers the risk of digestive acidosis, thereby enhancing horse nutrition and welfare.