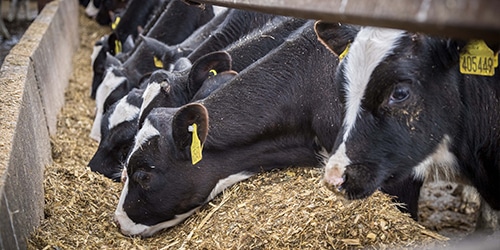 Early life is a particularly challenging period for calves. Their immune system is still developing, making them more susceptible to disease challenges and subsequent setbacks. By supporting immunity and encouraging gut development, we can ensure the calf is primed for a quick transition on to solid feed. Supporting the animal through this difficult life stage translates to better performance later on in life, including completing their first calving by 24 months of age.

Mike Smith milks 450 Holstein-Friesians with his brother Peter at Pelcomb Farm in Haverfordwest, Pembrokeshire. His herd yields 8,900 litres at 4.24% butterfat and 3.48% protein on average and supplies First Milk’s Haverfordwest Creamery. The farm runs an autumn block calving system and raises its own replacement heifers on site, with bull calves going to beef.

About 430-450 calves are raised every year by employee Karen Golding, who oversees all aspects of calf management on the farm. She starts heifer calves on milk replacer from two days old, gradually building their intakes up from 5 L/day in the first week to 8 L/day in week four, and straw and coarse mix also available ad lib. Calves are weaned at 80 kg or 7 weeks old over a period of 2-3 weeks, and TMR is introduced alongside the coarse mix toward the end of this period. All calves are band weighed every two weeks by the vet from birth to weaning to monitor their progress.

“When I began working with the calves two years ago, I didn’t feel that our heifers’ milk replacer was meeting their needs during this crucial stage of development. Overall calf health, condition and growth rates could have been better,” said Karen.

“We introduced a new milk replacer that included Actisaf and Safmannan on the recommendation of Matthew Van Djik from Bibby Agriculture. As soon as we started feeding the new replacer, the calves massively improved,” said Karen.

Actisaf and Safmannan work together in calf diets to support gut health and immunity, giving them the best start in life. This results in better feed utilisation, good digestive development, smoother transitions to solid feed and improved immune status, and subsequently strong growth rates and reduced growth checks during periods of stress and challenge.

Since introducing the new replacer, Karen has also seen improvement in her calves’ ability to handle health challenges, and she continues to see positive growth in of 0.5 kg/day even during bouts of illness. On average, daily live weight gain is 0.7-0.8 kg/day, but can go up to 1.2 kg/day.

The successful calf rearing programme at Pelcomb Farm is also paying off when heifers enter the milking herd: “Our heifers have an average age of 23 months at first calving,” said Mike. “We have given Actisaf and Safmannan to over 500 heifer calves in the last two years, and with success like this I feel it represents a good value as a part of our rearing strategy.”

Karen added, “As a block calving unit with all of our calves in one area of the farm, we will have occasional health challenges. These will have an impact on our calves’ digestive systems but having Actisaf and Safmannan in the diet helps to keep negative effects to a minimum. These products are a part of my toolkit as a calf rearer, components of our programme that I wouldn’t be without!”